The fallout from Trump’s acquittal.

It’s the start of a new week. We’re covering the latest from former President Donald Trump’s impeachment trial, a mental health pandemic among young people and a love story for geriatric lemurs. 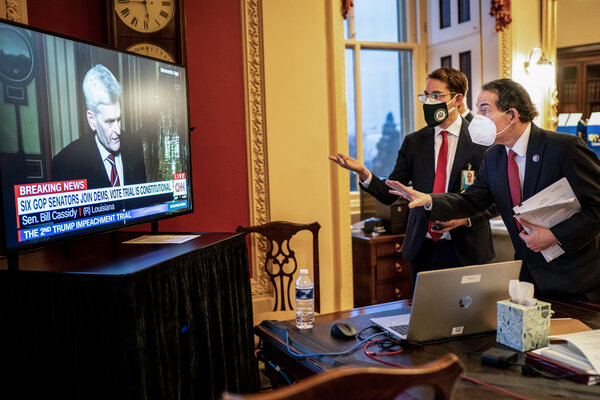 The fallout from Trump’s acquittal

Seven Republican senators voted on Saturday with Democrats to convict former President Donald Trump — the most bipartisan rebuke ever delivered in an impeachment process. But the votes, 57 to 43, fell 10 short of the two-thirds majority needed to allow the Senate to move to disqualify him from holding future office. Here’s how each senator voted and key takeaways from Day 5 of the trial.

Even with the acquittal, the trial will hardly be the last word on Mr. Trump’s level of culpability in the assault on the Capitol last month. Using evidence that emerged in the impeachment trial, our reporters stitched together the most comprehensive account to date of Mr. Trump’s actions during the hours in which the attack took place.

This much is certain: Mr. Trump remains the dominant force in right-wing American politics.

Remaining legal jeopardy: The former president still faces three investigations, two relating to his business dealings in New York and a third surrounding his attempts to overturn his election loss to President Biden in the state of Georgia.

Biden administration: The rapid acquittal will allow the new president to refocus attention on the issues that propelled him to victory: the coronavirus pandemic and its economic fallout.

With coronavirus restrictions in European countries set to drag into the spring or perhaps longer, health professionals fear the deteriorating mental state of young people, who they say have been among the most badly affected by a world with a foreshortened sense of the future.

Last in line for vaccines, young people have borne much of the burden of sacrifices made largely to protect more vulnerable older people. Hospitalizations of young Italians who harmed themselves or attempted suicide have increased 30 percent in the second wave of the virus, while a French survey of 30,000 people found that young people ranked the lowest in psychological well-being.

“I’ve never had so many suicidal thoughts,” said Philaé Lachaux, a 22-year-old business student. “The pandemic feels like a big stop in our lives. One that puts us so low that I wonder, ‘What’s the point?’”

British government scientists say the coronavirus variant first detected in Britain is likely to be linked to a higher risk of death than other versions of the virus.

Researchers have identified seven new variants circulating in the U.S., all with the same worrying mutation.

In cities across the country on Sunday evening, armored vehicles and trucks filled with soldiers moved in.

Security forces fired rubber bullets, water cannons and tear gas at a crowd. Troops surrounded the houses of government workers who had dared to join the campaign to oppose the Feb. 1 coup that ousted Daw Aung San Suu Kyi, the country’s civilian leader.

The military information unit issued a statement explaining the sudden buildup: “Security forces will be performing day and night security for the public to sleep peacefully in the community.”

A warning: Ambassadors from several Western nations, including the U.S., urged the military in a joint statement to “refrain from violence against demonstrators and civilians, who are protesting the overthrow of their legitimate government.”

“We support the people of Myanmar in their quest for democracy, freedom, peace and prosperity,” the statement said. “The world is watching.”

If you have 8 minutes, this is worth it

A taste for change in the Middle East

A decade ago, after a fruit seller in a poor Tunisian town set himself on fire when a policewoman slapped him and confiscated his scale, his death crystallized popular frustrations across the region. Protesters forced Tunisia’s autocrat, Zine el-Abidine Ben Ali, into exile, and demonstrations erupted in Egypt, above, Libya, Yemen, Bahrain and Syria.

While those Arab Spring uprisings mostly failed, they gave people appetite for change and for the possibility of democracy. “The younger generations saw what happened,” said Tarek el-Menshawy, a mechanic in Cairo. “It’s like a shark when they smell blood. Freedom is like this. We smelled it once, so we’ll keep trying.”

Harry and Meghan: The couple are expecting a second child, their spokesperson said Sunday, a joyful bit of news after a year in which they broke away from the British royal family, started new lives in California and had a miscarriage.

W.T.O.: The World Trade Organization is poised to name Ngozi Okonjo-Iweala, a Nigerian economist, as its director general, making her the first woman and first African in the job.

China repression: The Utsuls, a community of about 10,000 Muslims on the resort island of Hainan, are among the latest to emerge as targets of the Chinese Communist Party’s campaign against foreign influence and religions.

Ebola: A new outbreak of the deadly virus in Guinea has killed three people. The country was the starting point for a 2014 epidemic that killed more than 11,000 people.

Japan earthquake: In the northeastern Japanese city of Nihonmatsu, more than 100 people were injured and nearly one million households left without power after a strong earthquake struck late Saturday, causing a landslide.

Snapshot: Above, Laul Zerabruk, center, and members of his family and a neighbor are Ethiopian refugees from the Tigray region who have found a warm welcome in the sleepy Sudanese town of Hamdayet. “Sudan is like our second mother country,” he said. “They have done everything they can.”

Lemur love: At a lemur center in North Carolina, geriatric lemurs are paired with platonic companions, sometimes of another lemur species. “Our goal is that no lemurs live alone,” the head keeper said. “It’s totally unnatural and not good for their well-being.”

What we’re looking at: These nature videos, from @gourmetbiologist’s Instagram feed. “The conservationist and wildlife photographer Sean Graesser gives viewers the most amazing close-ups of awesome birds from his field work,” says Andrea Kannapell, the Briefings editor. “Stunning.”

Cook: Find comfort in a bowl of lablabi, a Tunisian chicken soup. Not eating meat? We’ve got you covered with 17 cozy vegetarian and vegan soups.

Listen: Chick Corea, the pioneering keyboardist and bandleader who died last week at age 79, will be forever regarded as a crucial architect of jazz-rock fusion. Here are 12 of his best performances.

“I Do”: Many couples downscaled wedding plans because of the pandemic. Here’s our guide to an extraordinary day just for two.

Make time for you. At Home has our full collection of ideas on what to read, cook, watch and do while staying safe at home.

Tracking the origins of the coronavirus

Peter Daszak was a member of the World Health Organization’s investigative research team that recently traveled to Wuhan, China, to try to uncover the origins of the coronavirus. An animal disease specialist, he spoke with our science reporter James Gorman about the mission and the seafood market where the initial outbreak occurred last year.

Did you learn anything from this trip that you didn’t know before?

From Day 1, the data we were seeing were new that had never been seen outside China. Who were the vendors in the Huanan seafood market? Where did they get their supply chains? And what were the contacts of the first cases? How real were the first cases? What other clusters were there?

When you asked for more, the Chinese scientists would go off, and a couple of days later, they’ve done the analysis, and we’ve got new information. It was extremely useful.

What can you say now about the market and what you saw?

The market closed on the 31st of December or the 1st of January, and China C.D.C. sent a team in of scientists to try and find out what was going on. It was a very extensive study, swabbing every surface of this place. We knew early on that there were 500 samples collected, and there were many positives, and in that sampling were some animal carcasses, or meat. But there was not really much information publicly about what had been done. So we got all that information. And that, to me, was a real eye-opener.

They’d actually done over 900 swabs in the end, a huge amount of work.

Do you have a particular animal that you suspect right now as an intermediate link, more strongly than others?

It’s too up in the air. We don’t know if civets were on sale. We know they are very easily infected. We don’t know what the situation is with the mink farms in China or the other fur farms, like raccoon dogs, even though they’re normally farmed in a different part of China. That needs to be followed up on, too.

That’s it for this briefing. I’ll see you tomorrow.

P.S.
• We’re listening to “The Daily.” Our latest episode is on the debate in France over the relationship between government and religion.
• Here’s our Mini Crossword, and a clue: Preschool basics (four letters). You can find all our puzzles here.
• Our National reporting desk has a new leadership team. Read about the new appointments here.