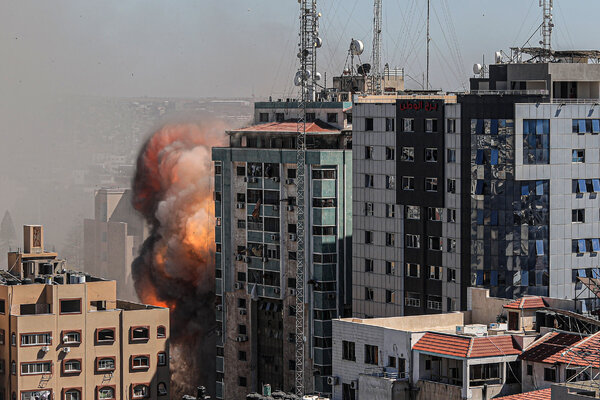 At least 33 people died in Gaza on Sunday after Israel’s single deadliest airstrike in a weeklong bombing campaign that has killed at least 192 people — most of them civilians, including 58 children — according to Palestinian officials.

Earlier this weekend, Israel demolished a building that housed offices for The Associated Press and Al Jazeera. Meanwhile, Hamas has fired almost 3,000 rockets at Israel from the Gaza Strip, killing at least 10 people. Both sides are violating the laws of war, experts said, as civilians pay an especially high price. Here’s the latest.

The U.N. Security Council met to discuss the conflict in public for the first time on Sunday. The violence shows no signs of stopping.

“We’ll do whatever it takes to restore order and quiet,” Prime Minister Benjamin Netanyahu of Israel said on CBS’ “Face The Nation” on Sunday. “It will take some time.”

Why now? A little-noticed police action may have set off the violence, our Jerusalem bureau chief explains. Political shifts on both sides fanned the flames.

Context: Saturday was Nakba Day, a commemoration of the displacement of hundreds of thousands of Palestinians in 1948. Protesters gathered in the West Bank, marched from Jordan toward the Israeli border, and walked from the Washington Monument to the U.S. Capitol. Read our analysis of the holiday.

Eyes on Biden: For years, support for Palestine has been an off-limits conversation in Washington. Now, divisions between the leadership of the Democratic Party and the activist wing have burst into public view, as President Biden walks a fine line.

The pandemic splits in two

A few months ago, while outbreaks were exploding across major Western cities, India’s leaders boasted that they had triumphed over the coronavirus.

Now, that pattern has flipped.

As vaccines roll out, the pandemic has become a global tale of haves and have-nots. Many wealthy cities are making significant progress, thanks to the doses they’ve stockpiled. But outbreaks are devastating developing nations where there aren’t enough available.

Vaccines are not the only defense — governments across Asia and Oceania have kept cases low despite low vaccination rates. And in cities with high rates, restrictions were also critical in bringing case numbers down. But this year, no factor has had a greater impact on a nation’s path out of the pandemic than the number of shots it can buy.

Haves: In New York City, London and Tel Aviv, nearly half of residents have received a first dose. The cities are preparing to welcome tourists and ease restrictions.

Have-nots: Just 10 percent of India’s 1.4 billion people have received at least one dose. The pace of vaccinations has slowed dramatically, despite donated vaccines and limits on exports. Now India’s outbreak, along with a potentially more contagious variant, appears to be spreading to neighboring countries.

Australia’s first repatriation flight from India was half empty because would-be passengers had tested positive for the coronavirus or had close contacts who did.

New Delhi has stabilized its oxygen shortage and will start sending its surplus around India.

China successfully landed a rover on Mars, in Nowhere Land Plain, establishing the country as a principal contender in what may be a new era of space competition. The spacecraft touched down on Saturday morning, accomplishing a feat shared only with the United States and the United Arab Emirates.

Goals: One aim is to better understand the distribution of ice in a region visited by NASA’s Mars Reconnaissance Orbiter in 2016, which people could use to sustain themselves.

Challenges: Spacecraft descend to Mars at high speeds and the thin atmosphere does not offer much of a buffer. The Chinese rover descended a little slower than NASA’s Perseverance, in part because it had been orbiting the planet since February.

Big picture: China has ambitious plans. After launching the core module of a new orbiting space station last month and collecting nearly four pounds of rocks and soil from the moon in December, the country plans to send three astronauts into space next month, inaugurating what could become a regular presence in Earth’s orbit.

In a rebel-controlled pocket of Syria, solar panels power a community cut off from the grid.

Tens of thousands of people were evacuated from their homes in India as a severe cyclone barreled toward landfall in Gujarat Sunday evening.

Afghans braved violence amid a broken three-day cease-fire to celebrate Eid al-Fitr with their families this weekend.

A detainee at Guantánamo Bay gave up the right to question the C.I.A. in court about its torture program in exchange for a future release.

Miss Universe Myanmar is using her platform to criticize the military coup and support a pro-democracy movement.

A long-shot colt named Rombauer won the Preakness Stakes, beating Medina Spirit, who was nearly excluded from the race after failing a drug test.

Marine Le Pen, the far-right French politician, is trying to rebrand toward respectability in her bid for the presidency.

An archaeological find in the Czech Republic has prompted a nationalist brawl by offering evidence of cooperation between rival ethnic and linguistic groups.

On a podcast, Prince Harry said his life in the British monarchy was “a mix between ‘The Truman Show’ and being in a zoo.”

The Los Angeles Angels unleashed “super freak” Shohei Ohtani as a pitcher and a hitter, and he’s dominating at both.

Behind President Biden’s folksy demeanor is a methodical, detail-obsessed leader with a short fuse. Despite the urgency of the coronavirus pandemic recovery, political maneuvering and foreign policy concerns, Biden often deliberates for days or weeks.

Created as a cryptocurrency parody in 2013, Dogecoin languished for years. This year it went absolutely wild. For Dogecoin’s individual holders, it’s been a weird ride.

One woman is holding on to hers, hoping to help out a nonprofit organization she helps run. One man sold right before the price tanked when the billionaire Elon Musk touted Dogecoin on “Saturday Night Live,” and put some earnings toward his sister’s wedding. A mom is just happy for an outlet after “feeling so beat up emotionally” by the Trump presidency, the pandemic and personal health issues.

The rich and powerful like to stir up interest in the cryptocurrency, but regular people are doing the trading. It’s a risky bet — the meme-inspired currency may tank at any moment. But the silliness is kind of the point, and some find community and meaning.

“We have let the market dictate how the world is run for too long,” said Heath Durrett, a 35-year-old Oklahoman. “Now I’d like to think that the tides have turned more to the public.”

Nicki Minaj’s reunion song with Lil Wayne and Drake is among the 14 new tracks featured on our pop critics’ latest playlist.

Paper mushrooms, lamps made from maple syrup cans, hand-embroidered lungs: Times readers sent in photos of the crafts they made this year.

That’s it for today’s briefing. See you next time. — Amelia

P.S. Our most recent California Today newsletter is about America’s first Koreatown.

The latest episode of “The Daily” is about a Dogecoin millionaire.

You can reach Amelia and the team at [email protected].