We’re covering a coronavirus study with risks, protests in Myanmar and the pandemic’s toll in Israel’s ultra-Orthodox communities. 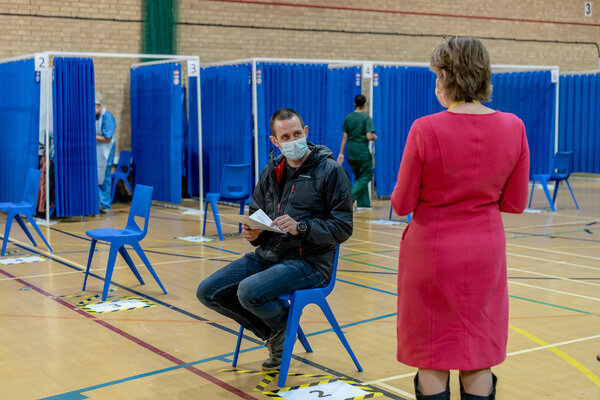 A potentially risky British study on the coronavirus

In a new study, authorized by British regulators on Wednesday, a small group of unvaccinated volunteers, restricted to healthy people ages 18 to 30, will be deliberately infected with the coronavirus.

The scientists hope to eventually expose vaccinated people to the virus as a way of comparing the effectiveness of different vaccines. But before that, the project’s backers have to expose unvaccinated volunteers to determine the lowest dose of the virus that will reliably infect them.

By controlling the amount of the virus people are subjected to and monitoring them from the moment they are infected, scientists hope to discover things about how the immune system responds to the coronavirus that would be impossible outside a lab — and to develop ways of directly comparing the efficacy of treatments and vaccines.

Unknown outcomes: There have been severe Covid-19 cases even in younger patients, and the long-term consequences of an infection are largely unknown. The age restrictions may also make it difficult to translate the findings to older adults or people with existing conditions.

The European Union has upended its economic policies, spending billions of euros to nationalize payrolls, suppress bankruptcies and avoid mass unemployment during the pandemic. Trillions more are being earmarked to stoke a desperately needed recovery.

The Cuban government says it is on the brink of the mass production of a coronavirus vaccine invented on the island.

Two thousand doses of the Russian-made Sputnik V vaccine arrived in the Gaza Strip on Wednesday, after Israel approved the delivery.

The Biden administration pledged nearly $200 million to better identify coronavirus variants. The White House said the funds would increase the number of virus samples that federal labs are capable of sequencing from around 7,000 to around 25,000 each week.

Japan began its coronavirus vaccination campaign on Wednesday, starting with medical workers and aiming to reach the general population ahead of this summer’s Olympic Games.

Art and defiance in Myanmar

In the biggest rally since the start of protests against a coup in Myanmar, hundreds of thousands gathered in central Yangon on Wednesday holding up posters and signs designed for the Instagram generation.

As with protests in Thailand and Hong Kong, demonstrators in Myanmar have turned to memes and creative dissent to spread their message, including graffiti, hip-hop, poems, anthems, cartoons and paintings. Art collectives are producing free designs for protesters to print on signs.

Along with the demonstrations, more than 750,000 people have stopped going to work. That the movement is undeterred, and gaining steam, is notable: The military has arrested more than 450 people since the coup on Feb. 1, even firing shots into the crowds. It also has long seen menace in the arts.

Artists as targets: Among the dozens of people captured alongside Daw Aung San Suu Kyi, Myanmar’s civilian leader, were a filmmaker, two writers and a reggae singer. A graffiti artist whose protest tags have enlivened Yangon said he was on the run from the police.

Harry and Meghan return to the spotlight

As Prince Harry and his wife, Meghan, note the first anniversary of their acrimonious split with the British royal family, the wounds have yet to heal — between them and the tabloids, or even, according to people with ties to Buckingham Palace, between them and members of the House of Windsor.

Harry and Meghan will soon lose their patronage appointments under the severance agreement hashed out last year. They have agreed to a prime-time interview with Oprah Winfrey, which will be broadcast in the United States on March 7. Palace officials are steeling themselves for potentially embarrassing disclosures.

The couple chose Valentine’s Day to announce they were expecting their second child, confirming the news with a dreamy black-and-white photo of themselves posed under a tree. British tabloids responded with criticism — of the photograph, and of Harry’s feet.

If you have 4 minutes, this is worth it

This time last year, Rio de Janeiro’s prime Carnival site was a caldron of glitter-smeared bodies packed together, swaying to the beat of drums. But with a pandemic raging, the party has been canceled.

Now, the main venue for samba, the Sambódromo parade grounds, above, hosts a vaccination site. Hildemar Diniz, a Carnival aficionado, said all the grief Brazilians were feeling would fuel a Carnival for the ages when it’s safe to party again. “People are thirsty for joy,” he said.

Harry Dunn: Anne Sacoolas, a U.S. State Department employee, was charged in a car accident that killed the British teenager in 2019. Ms. Sacoolas returned to the U.S. and has refused to return to Britain to face prosecution. A Virginia judge now says his parents can sue for damages.

Rwanda: The trial of Paul Rusesabagina, the genocide-era hero of “Hotel Rwanda” fame, began this week. Mr. Rusesabagina angered the Rwandan government with his pointed criticism from exile, and his supporters say he has no chance of getting a fair hearing.

Texas storms: The electricity crisis in Texas is worsening. The state’s power grid manager said that more than 3.4 million customers were still without power — and, in many cases, heat. The Federal Emergency Management Agency has sent generators and blankets.

Australian tech laws: Weeks after Google threatened to leave Australia if the government forced tech platforms to pay for news, the search giant is suddenly showering money on its most demanding critics. Facebook has instead opted to restrict the sharing of news on its platform there.

Snapshot: At a funeral in a yeshiva in Jerusalem, above, most mourners wore masks, even if the event itself was illegal. The coronavirus has devastated Israel’s ultra-Orthodox communities, which eschew social distancing. Our reporters look inside an insular culture that has been both a vector for the virus and its victim.

Woolly mammoths: A team of researchers has reconstructed DNA from a mammoth fossil more than a million years old, smashing the record by several hundred thousand years.

What we’re watching: The Australian Open. Follow all our coverage here.

Cook: Salmon and chewy farro pair well with this refreshing lemony salad of cucumbers and radicchio.

Read: The memoir “Consent,” by Vanessa Springora, sent shock waves through the French establishment when it was published last year. “By every conceivable metric, her book is a triumph,” writes our critic.

Watch: The British mini-series “It’s a Sin” tells stories of young gay men in London at the onset of the AIDS crisis. It’s heartbreaking, but full of life.

Don’t give up hope. At Home has our full collection of ideas on what to read, cook, watch and do while staying safe at home.

About three decades ago, the Clinton White House established the first council for women and girls. It was disbanded, but is now back. Our gender newsletter talked to the former secretary of state and presidential candidate.

Twenty-five years after your “women’s rights are human rights” speech in Beijing, should the discussion around women’s rights be reframed?

We needed to shift our attention and certainly our rhetoric from a rights-based framework to a power-based one. You cannot continue to argue about whether women deserve certain rights or not. The power imbalance that still exists is what I think has to be the basis for the debate going forward.

If you just call for equal pay, for example, and you don’t look at the disparities as to where women are working, which we’ve now seen painfully exposed because of the pandemic, then you’re missing the bigger picture.

Should the U.S. have a dedicated gender department, like the Office for Women in Australia or similar setups that other countries have adopted?

There are different approaches that are certainly worth looking at. But in this country right now, I think what we want to do is focus on getting results for people and not letting a bureaucracy become the goal. Because I don’t think most women would care about that. I think they would rightly say, “Well, how does that help me get better access to quality child care?”

That’s it for this briefing. See you tomorrow.

Thank you
Theodore Kim and Jahaan Singh provided the break from the news. You can reach the team at [email protected]

P.S.
• We’re listening to “The Daily.” Our latest episode is about an energy crisis in Texas.
• Here’s our Mini Crossword, and a clue: Closed (four letters). You can find all our puzzles here.
• Our Tokyo bureau chief, Motoko Rich, spoke to The Japan Times’s “Deep Dive” podcast about Yoshiro Mori’s sexist comments and what his resignation says about the status of Japanese women.