Good morning. Asian-American communities are on high alert after a deadly attack, and frustrated Balkan nations look to Chinese and Russian vaccines. 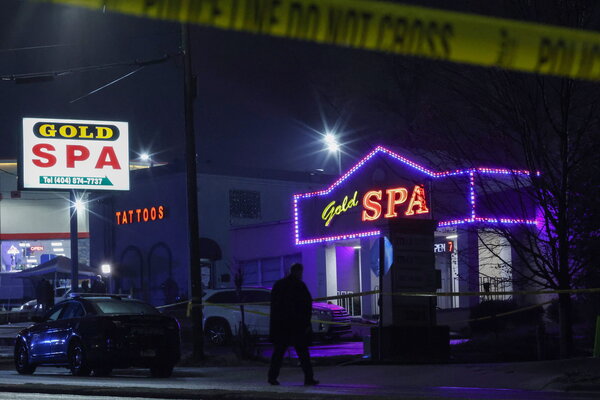 Shootings in the Atlanta area that left eight people dead, including six Asian women, have put Asian communities across the U.S. on high alert and prompted law enforcement officials to increase patrols. People across the nation felt outraged and scared.

The gunman who shot and killed eight people at massage parlors in Georgia was charged with several counts of murder. The police captured the 21-year-old as he was on his way to Florida, where he may have planned more violence.

Although the police are still investigating motives, nearly 3,800 hate incidents targeting Asian-Americans have been reported in the U.S. since the pandemic began, according to Stop AAPI Hate. The shootings appear to be at the “intersection of gender-based violence, misogyny and xenophobia,” state Rep. Bee Nguyen, the first Vietnamese American to serve in the Georgia House, told The AP.

Asking for help: Asian-Americans in the San Francisco Bay Area are calling for more police patrols after a string of attacks. Older residents in particular have been the targets of robberies, verbal attacks related to the coronavirus pandemic, and assaults. “Our seniors are afraid to walk their own streets,” said Carl Chan, the president of the Oakland Chinatown Chamber of Commerce. Residents described fear, tension and feeling forced to change their routines in a PBS report on the rise of hate crimes in the area. The Cut compiled ways to help.

A vaccine divide in the Balkans

In the past week, the Balkans and other parts of Central and Eastern Europe have recorded some of the world’s highest per capita death rates from Covid-19. The Czech Republic leads the global toll with 2.03 deaths per 100,000, followed by Slovakia, Hungary, Bulgaria, Montenegro and Bosnia, and North Macedonia is not far behind, according to a Times database.

Many in the Balkans, whose countries are not members of the European Union but look to it for help, are feeling abandoned by the bloc, which has struggled with one of the world’s slowest vaccine rollouts. By contrast, Serbia, which has signed deals for 11 million doses of Russian, Chinese and Western vaccines, has become the continent’s second-best vaccinator, our correspondent reported from Belgrade.

Vaccines symbolize power in the pandemic era, bringing with them the chance to supercharge the economic recovery. Diplomatically, Serbia’s success makes President Aleksandar Vucic look good as the E.U. struggles; the country has even donated shots to other parts of the region.

For Serbia, the shots build on the country’s alliance with China, which has invested billions there, said Majda Ruge at the European Council on Foreign Relations. Last year, the government touted China’s help in its pandemic response, downplaying E.U. support, she said. In one survey of Serbians from the Belgrade Center for Security Policy, 75 percent of respondents thought China provided the most help in the pandemic, and only 3 percent said the same of the E.U.

Others in the region are looking east, too. Montenegro and Bosnia are buying Russian vaccines. North Macedonia announced it was buying Sinopharm’s shots, and Albania said it was considering both. “Covid-19 has contributed to growing the distance between the E.U. and Western Balkans,” Naim Rashiti, executive director of the Kosovo-based Balkans Policy Research Group, told me.

The E.U. on Wednesday proposed a certificate that would allow people to travel more freely if they could show proof of vaccination, a negative test or a documented recovery from the coronavirus. It is intended to salvage the summer for member states that depend on tourism.

Former U.S. President Donald Trump called the Covid vaccines “great” and “safe” in a Fox News interview. “I would recommend it to a lot of people that don’t want to get it, and a lot of those people voted for me, frankly,” he said. Polls have shown that a high percentage of his supporters said they wouldn’t get a vaccine.

The U.S. punishes Chinese officials ahead of talks

The U.S. State Department said it would impose financial sanctions on 24 Chinese officials for undermining Hong Kong’s democratic process, setting a confrontational tone on the eve of high-level meetings with Chinese diplomats on Thursday.

The timing of the action was stark, continuing a testy start to relations between the Biden administration and Beijing. The list of officials notably includes a member of the Communist Party’s 25-member Politburo.

Secretary of State Antony Blinken said China’s efforts to rewrite the territory’s election laws “further undermines the high degree of autonomy promised to people in Hong Kong and denies Hong Kongers a voice in their own governance.”

A Japanese court found that it was unconstitutional not to recognize same-sex unions.

President Biden said it would be “tough” to meet a May 1 deadline to withdraw all remaining U.S. troops from Afghanistan.

Tashnuva Anan Shishir, who waged a decades-long quest for acceptance in Bangladesh, made history as the country’s first transgender news anchor.

Protecting strategic zones of the world’s oceans from fishing, drilling and mining could help fight global warming, researchers found in a groundbreaking new study. Among the findings: Trawling, or dragging nets along the ocean floor to catch fish, releases as much planet-warming carbon each year as global aviation.

Sarah Everard’s killing energized a national effort to combat pervasive violence against women in Britain. Amid the national attention, her friends and family were left to mourn in private. They described a friend who “was sunshine and light, and made you feel warm and good and safe.”

For sale: your day

“Have you ever wanted to control my life?” a 15-year-old TikToker with 3.3 million followers asked in a recent online video. He then asked his fans what game he should play with friends — and 78 percent chose dodgeball. Fans have also voted on what he should watch, what video games he should play and what to name his pet hamster.

Start-ups are making it easier for digital creators to monetize every aspect of their lives, reports our colleague Taylor Lorenz. One of those companies is NewNew, where fans pay to vote in polls to determine a creator’s daily choices. Five votes cost $4.99.

“It doesn’t matter how boring you think you are, there’s someone out there who would find your life interesting to the point that they’re willing to pay,” said NewNew’s founder, Courtne Smith.

Influencers are joining such platforms for the promise of diversification, Taylor writes, leaving them less beholden to the ever-changing algorithms and pay structures of social media giants — but more beholden to their fans when it comes to the minutiae of their lives.

Linguine with chickpeas, broccoli and ricotta. Enjoy with crusty bread, good wine and a sense of accomplishment for getting dinner on the table in under half an hour.

Enjoy a book tour from your living room: Viet Thanh Nguyen will talk about “The Committed,” his sequel to “The Sympathizer,” and Kazuo Ishiguro will discuss his highly anticipated “Klara and the Sun.”

In a new documentary, “Dancing With the Devil,” Demi Lovato opens up about her queerness, her near-fatal overdose and her journey to living her truth. “I’m ready to feel like myself,” she said.

That’s it for today’s briefing.

See you next time. — Melina

P.S. In honor of Women’s History Month, Charo Henríquez was profiled by Ms. Magazine for her role as editor of newsroom development and support at The Times.

The latest episode of “The Daily” is about the fight around minimum wage in the U.S.

Sanam Yar contributed reporting. You can reach Melina and the team at [email protected].