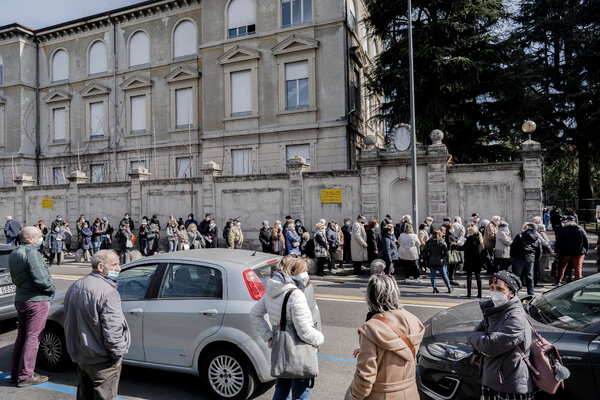 Bureaucratic hurdles and logistical problems have undercut vaccination efforts in Italy, preventing older and vulnerable Italians from getting shots, while hundreds of doses of Covid vaccines are at risk of going to waste.

Italy has the highest rate of daily deaths from Covid-19 among Europe’s major powers, in a country that has the continent’s oldest population. Fewer than one in five people over 80 have received two doses of a vaccine, and less than 5 percent of those 70 and over have gotten their first shot.

Vaccine flash point: The Italian authorities found 29 million doses of AstraZeneca’s vaccine in a factory near Rome, feeding suspicions that they were meant for export (officials later accepted the company’s explanation that they were going through quality control). The E.U. unveiled proposed stringent export restrictions primarily meant to stop drugmakers from sending doses outside the bloc.

After Tuesday’s election in Israel ended in yet another apparent stalemate, the Arab political party Raam, a conservative, Islamist group with roots in the same religious movement as the militant group Hamas, has emerged as a potential kingmaker.

For years, Raam was rarely interested in working with the Israeli leadership and, like most Arab parties, was ostracized by its Jewish counterparts. But its five seats could hold the balance of power between Prime Minister Benjamin Netanyahu’s right-wing bloc and the motley alliance of parties that seeks to end his 12 years in power.

Raam has promised to back any group that offers something suitable in return to Israel’s Arab minority, who form about 20 percent of the population. Raam would also consider securing government support for its fight against the central problems assailing Arabs — gang violence, poverty and restrictions on their access to housing, land and planning permission.

An independent Arab party has never been part of an Israeli government, although some Arab lawmakers supported Yitzhak Rabin’s government from the outside in the 1990s.

By the numbers: With 90 percent of the votes counted from Israel’s parliamentary elections, Mr. Netanyahu’s right-wing alliance had 52 seats, while his opponents had 56 — both several seats short of the 61 needed to form a coalition government.

As the nation’s military continues its deadly assault on unarmed civilians each day, some protesters say there is no choice but to fight on the army’s own bloody terms.

Groups of students, activists and office workers have mobilized with weapons into a kind of guerrilla force, meeting in forests to train in basic warfare techniques and plotting to sabotage military-linked facilities.

The boldness and desperation are a response to the military’s ruthless crackdown, with 275 people killed since the Feb. 1 coup. Security forces have fired at bystanders and ambulances and have tortured detainees. Dozens of young protesters have been killed by single gunshots to the head.

How it looks: Frontline fighters have piled up sandbags and built bamboo barricades, which they defend with homemade firebombs. In some cases, they have the backing of ethnic insurgencies that have been targeted for years by the Tatmadaw, as the military is known.

Quotable: “We have to attack them back,” said a woman from the city of Yangon who was in the forest for a week of boot camp. “This sounds aggressive, but I believe we have to defend ourselves.”

Hong Kong suspended use of the Pfizer-BioNTech vaccine after packaging defects ranging from cracked containers to loose caps were discovered in one batch of doses. Health officials called it a precaution.

Chancellor Angela Merkel scrapped an unpopular plan to shut down the German economy for two extra days over the Easter holidays, as her government faced anger over its chaotic response to a resurgence of the coronavirus.

More than 40 U.S. states will offer Covid-19 vaccines to all adults by May 1, meeting or beating President Biden’s deadline. About 2.5 million doses are being administered across the country each day.

A container ship nearly a quarter-mile long has been stuck in the Suez Canal since Tuesday evening, blocking one of the world’s most vital shipping lanes.

Organizers are pressing ahead with plans to hold the Tokyo Olympics this summer, but epidemiologists warn that the Games could become a superspreader event. Polls show that most of the Japanese public says the event should be postponed again or canceled.

Owners and employees of the spas attacked in Atlanta last week were immigrants with similar dreams, but were separated by a vast gap in money and power. Our reporters looked at the disparities.

Fourteen protesters were arrested in Bristol, England, on Tuesday night at a rally to denounce a policing bill that would restrict peaceful demonstrations.

Above, mariachi bands in the U.S. have evaded financial ruin in the pandemic by playing not at the birthdays and weddings that were once their bread and butter, but at funerals, including those of fellow musicians.

A study found that a shift to plant-based feed at fish farms significantly lowered the industry’s environmental footprint, as well as reducing disease and pollution.

To stave off Zoom fatigue, Citigroup, one of the word’s largest banks, is planning to make casual Fridays Zoom-free Fridays, too (but only for internal meetings).

Two back-to-back mass shootings have people once again asking: Why does the U.S. have so many? An ever-growing body of research consistently reaches the same conclusion: the astronomical number of guns, our columnists write.

A pandemic-proof night at the theater?

A pilot program in Berlin is reopening some of the city’s landmark cultural sites, despite surging coronavirus numbers and toughened restrictions in other areas of life.

The catch? You need to test negative for Covid-19, no more than 12 hours before curtain. The test is included in the price of the ticket and must be administered by medically trained workers at an approved center.

Along with two nights at the Berliner Ensemble, live performances are being held at two of the city’s opera houses, the Philharmonie and Konzerthaus, and at the Volksbühne theater. Holzmarkt, a nightclub, will also host a sit-down concert. The short run of shows is meant to test whether cultural events can be put on safely, even as infection numbers soar.

Despite an extension announced on Monday to German restrictions in place since October, Torsten Wöhlert, the city official in charge of the Berlin project, said he was determined to keep it running. “The pilot is designed to be safe even when infection rates are high,” he said.

As well as an epidemiological experiment, the Berlin initiative is a signal from a city that prides itself on its vibrant arts scene that culture still matters. And its residents agree: 350 tickets to one show sold out in four minutes flat.

This crispy, pan-fried gnocchi dish is studded with juicy tomatoes and melty pockets of mozzarella.

The internet is home to all kinds of advice about how to have a lucid dream — that is, experience consciousness while dreaming. What works?

“Francis Bacon: Revelations,” by Mark Stevens and Annalyn Swan, offers a comprehensive account of the painter’s life. “Where Bacon went, a story followed,” writes our reviewer.

That’s it for today’s briefing. Have a peaceful Thursday. — Natasha

P.S. Priya Krishna is joining The New York Times as a Food reporter.

The latest episode of “The Daily” is about Joe Biden’s 30-year quest for gun control in the U.S.