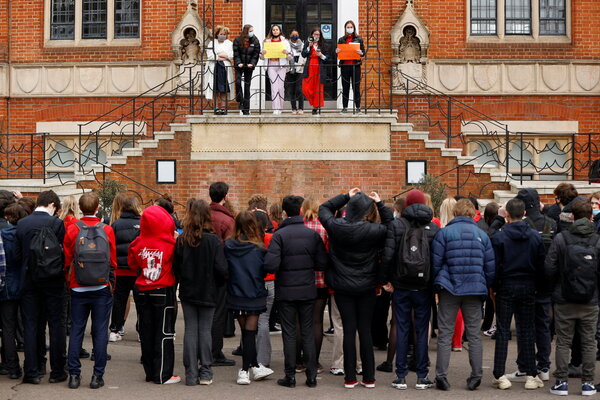 After weeks of harrowing anonymous accounts of sexual violence, sexism and misogyny at schools on a platform called Everyone’s Invited, local and national officials in Britain have begun investigations. On Wednesday, the government said an education body would conduct an immediate review of policies safeguarding students at both public and private schools.

It comes amid a broader reckoning in Britain after the killing of Sarah Everard, whose abduction from a London street last month set off a national conversation about the violence that women face.

The accusations include criminal sexual attacks, coercive encounters, verbal harassment and unwanted touching. They paint a picture of widespread sexual violence carried out by students at schools and elsewhere, including at parties.

A help line will start on Thursday, and allegations of criminal acts will be investigated, the Department of Education said. London’s Metropolitan Police encouraged victims to report crimes to the authorities.

Gender violence: People in India were horrified after a 16-year-old girl who said she had been raped was tied by the wrist to her accused attacker and paraded through her village. The episode has renewed calls for an end to victim shaming.

France prepares for another lockdown

President Emmanuel Macron of France yesterday announced restrictive measures in a desperate move to halt a new, deadly wave of Covid-19 infections, imposing a third national lockdown that will take effect Saturday and is scheduled to last four weeks.

Schools and nonessential businesses will be closed across the country, travel between regions will be banned and people’s outdoor activities will be limited to places within six miles of home, Mr. Macron said. University students will still be allowed to attend classes one day a week.

Many European nations have introduced new lockdowns in response to a wave of new cases that the E.U.’s slow vaccine rollout has failed to stem.

By the numbers: For the first time since last April, there were more than 5,000 people in France’s intensive care units on Tuesday. France has been averaging about 37,000 new cases a day over the past week, while about 8.5 million people, or about 13 percent of the population, had received at least a first dose of vaccine.

Pfizer-BioNTech said a clinical trial showed that its Covid vaccine was extremely effective in 12- to 15-year-olds, with no infections among children who received it.

Prime Minister Mario Draghi of Italy issued a decree requiring that workers in health care facilities be vaccinated. Some legal analysts have said the move could violate Italy’s privacy laws.

Russia’s state veterinary service said that, in a world first, it had approved a coronavirus vaccine for animals, intended for use on fur farms or for pet cats and dogs.

A hunger crisis in Yemen

For the second time in three years, the threat of widespread famine hangs over the war-torn country, where millions have been driven from their homes and struggle daily to find food.

What was already the Arab world’s poorest country has suffered chronic food shortages during the war. Famine was averted in 2018 only by a large influx of foreign aid. But the threat is greater this time, aid groups say, as the conflict grinds on and the pandemic has left donor nations more focused on internal matters.

Details: The United Nations says that 3.6 million Yemenis face emergency food shortages and 16,500 have reached the point of catastrophe. It estimates that 400,000 children are at risk of dying of hunger. During the last famine threat, The Times compiled a list of charity organizations for those who want to help.

On the ground: When Iman Murshid’s 8-month-old son came down with a fever and vomiting, she spent three days trying to get a ride to the nearest clinic, eventually setting out on foot for two hours with her child. Even after a week of treatment, his acute malnutrition has left him weak and barely able to move.

In Spain and other European countries, the authorities have restricted residents’ domestic travel even as they let them go abroad, and as foreign tourists are allowed to enter and move about more freely.

Italy expelled two Russian diplomats on accusations of espionage, after investigators said an Italian Navy official was observed giving them classified documents in exchange for money.

Aleksei Navalny, the imprisoned Russian opposition leader, said he was going on a hunger strike to demand better medical treatment.

It took six days to prise free the giant container ship that had clogged the Suez Canal, but it could take years for cargo companies, insurers, government officials and lawyers to sort out who will pay for the losses.

President Biden yesterday unveiled a $2 trillion infrastructure plan, a far-reaching proposal to fix aging American bridges, roads, rail lines and utilities. It would return government investment in those areas, as a share of the economy, to its highest levels since the 1960s.

Prosecutors in Manhattan who have been investigating former President Donald Trump and the Trump Organization subpoenaed the personal bank records of the company’s chief financial officer and are scrutinizing gifts he received from Mr. Trump.

On the third day of the former police officer Derek Chauvin’s trial in the killing of George Floyd, an employee of the food store outside which Mr. Floyd died took the stand, and prosecutors played previously unseen surveillance video, providing a fuller picture of what happened before Mr. Floyd’s death.

Even in the best of times, building a mosque in France has long been a tortuous endeavor. But it may now get harder, with tighter restrictions on foreign donations under President Macron’s new law against Islamism.

About two million Muslims in France practice their faith in 2,500 mosques that receive little or no public money.

Digging into your garden

Margaret Roach, who writes the In Garden column for The Times, wants readers to see planting and landscaping as more than outdoor decorating. She spoke to Times Insider about finding deeper meaning in gardening. Here’s an excerpt.

How did you get into gardening?

In my mid-20s, my father had died and my mother, who was about 49 at the time, got early-onset Alzheimer’s. Since she was a widow, I came home to Douglaston, Queens, to manage the situation, and I ended up getting a job as a “copy girl” at The Times at night and caring for her during the day. Someone thankfully gave me a James Underwood Crockett book, a companion to the PBS show “Crockett’s Victory Garden,” as a gift, and I just started doing everything in the book.

What did you take away from that experience?

It was occupational therapy. I had to be near my mother, but I could be digging in the front yard or pruning. So my initial connection with gardening was refuge. That was what did it for me — with the imprint of my grandmother Marion, who was a great gardener.

What do you hope readers take away from your column?

For me, the garden is kind of part Buddhist retreat, part science laboratory. It’s not outdoor decorating. There’s a lot of beauty, a lot of aesthetics — but that would be a shallow interpretation and a shallow experience.

I want to encourage people to dig into the whole garden, because it offers everything — it offers a lens into the food web, to the story of evolution and adaptation among species.

If you believe the only thing better than cheese is fried cheese, then you may just love halloumi, especially in this bright, punchy salad.

In “Godzilla vs. Kong,” ape and lizard go toe-to-toe. It’s an action movie made with lavish grandiosity, zero pretension and not too much originality, our film critic writes.

Pretend you’re in New Orleans with this guide. (Ideally, while listening to Big Freedia’s music.)

Here’s today’s Mini Crossword, and a clue: Part of the face (five letters).

P.S. Isabella Kwai, a reporter based in London, joined the “Press Play” podcast to discuss Sarah Everard, the vigils in her honor and violence against women in Britain.

The latest episode of “The Daily” features a conversation about voting rights with Senator Raphael Warnock of Georgia.