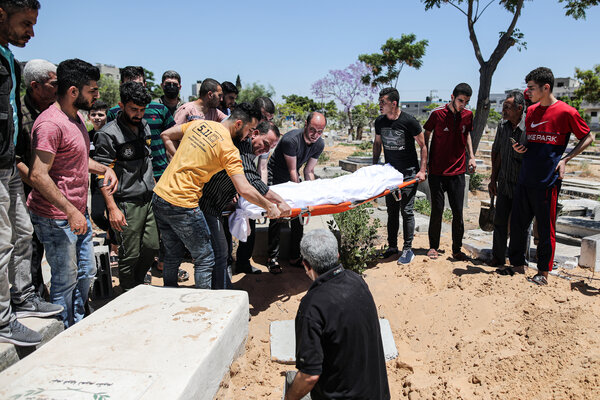 A possible cease-fire in Israel-Gaza conflict

Israel and Hamas will most likely reach a cease-fire agreement within the next two days, according to a senior Israeli official familiar with the negotiations and two others who corroborated the account.

The cease-fire under discussion would begin with an end to all Israeli attacks on Hamas infrastructure and facilities, as well as a halt to rocket fire from Hamas at Israeli cities. Israel is also demanding that Hamas stop digging attack tunnels toward Israel and halt violent demonstrations on the Gaza-Israeli border.

The agreement would come after strong urging from the international community, including the U.S., Germany and France. Officially, Israel has denied the existence of negotiations or the imminent signing of a deal, but that may be a tactic designed to put pressure on Hamas by showing that Israel does not fear further escalation.

“I was surrounded by death”: When rescuers in Gaza pulled a man and his 7-year-old daughter from the rubble after an airstrike, he awoke to a new life — one without his wife and four other children.

Toll: Israel’s Gaza bombardment has killed at least 227 people, including 64 children and a Palestinian reporter, Yusef Abu Hussein, the first journalist to be killed in the conflict. Hamas rockets have killed 12 people in Israel.

Mob violence: Israeli extremists have formed more than 100 new groups on WhatsApp to target attacks against Palestinians, including a mass street brawl in the town of Bat Yam on Israel’s coast. The episode was one of dozens across the country that the authorities have linked to a surge of extremist activity on the service.

Repercussions abroad: Jewish groups and European leaders have raised concerns that the conflict is spilling over into anti-Semitic words and actions in Europe, including attacks on synagogues in Germany.

Vaccinated travelers may visit the E.U.

The E.U. agreed yesterday to reopen its borders to visitors who have been fully vaccinated against the coronavirus and to those coming from countries with limited community transmission, permitting broader travel just in time for the summer tourism season.

The new rules, which are set to become formal policy next week, could be rolled out immediately, though many countries are likely to progress more cautiously. The bloc would also maintain an emergency brake option, allowing it to quickly snap back to more restrictive travel conditions if necessary.

Europe’s reopening: Here’s our guide to six of the continent’s most popular tourist destinations, explaining what is required for entry and what to expect if you do visit.

Joefred and Ralfred Gregory were 24-year-old twins in New Delhi who moved through life as one — and both died of Covid-19. Officials in India recorded 4,529 deaths from the virus on Tuesday, the highest count in any country so far.

In Germany, the lure of the freedoms promised by a vaccine has tempted some people to try the most un-German of activities: cutting in line.

Australian officials say the country is unlikely to fully reopen its borders until mid-2022, a move critics fear will turn the country into a “hermit nation.”

New York City, once at the center of the pandemic, has reopened for business.

But President Emmanuel Macron, in his bid to make France a global champion in the fight against climate change, is encountering resistance from all sides. The environmentally conscious accused the bill of “greenwashing” and prioritizing corporate interests; and the country’s business federations denounced what they deemed its overregulation and job-killing populism.

Context: Macron faces re-election next year against an array of challengers, including France’s rising Green Party. Even the far-right National Rally, his party’s chief rival, has embraced its own brand of down-to-earth environmentalism.

Pushback: Tens of thousands of French climate activists protested the legislation, which they warned was so diluted that France would be unable to meet its commitments to the Paris climate agreement.

Above, thousands of police officers protested in Paris yesterday in a call for more protections. They argued that their work had become increasingly dangerous because of the government’s failure to fix the country’s social problems.

A rare citizen lawsuit seeks to force government officials in Indonesia to address the pervasive pollution in the Jakarta metropolitan area, which has some of the worst air quality in the world.

A sharply divided House voted to create an independent commission to investigate the pro-Trump Capitol riot that took place on Jan. 6, overcoming opposition from Republicans.

Claims from a convicted organized crime boss about officials close to President Recep Tayyip Erdogan are rocking the Turkish government.

China released the first photos from its Mars landing.

New York’s attorney general has joined a criminal inquiry into the Trump Organization that is being conducted by the Manhattan district attorney.

From the Met Gala to your lunchtime salad bowl, Naomi Osaka — the 23-year-old Haitian-Japanese tennis champion — is suddenly ubiquitous. She made $37.4 million in endorsements and tournament prizes between May 2019 and May 2020, the most that a female athlete has earned in a single year.

“She ticks every box,” Cindy Gallop, a brand consultant, said, adding, “You can practically hear the brand managers thinking: ‘She is absolutely the right person to sponsor, right now.’”

Give the gift of time apart

Alone time is a precious commodity for couples and families that might not realize their irritability and stress could be tied to a lack of solitude. Allowing someone 24 hours of rest, or even just a few hours of undisturbed time alone, “can change the way they show up for others,” Nedra Tawwab, a therapist, told The Times.

The gift of free time can range from a night with friends to having your partner take the kids to the park on a Saturday afternoon so you can enjoy a deliciously empty house. Look for opportune windows to give alone time: If you’re taking the kids to visit your newly vaccinated parents for the weekend, does your partner really need to come along?

“A day of total freedom is both an opportunity to connect with your individual self and helps foster feelings of empowerment, which is a powerful antidote to the helplessness that a lot of us have felt during the pandemic,” said Jodie Eisner, a clinical psychologist. “It expands your recently narrowed comfort zone by reminding you that you’re capable and independent.”

This pizza features a mountain of brightly dressed greens and beans atop a crisp Parmesan crust.

Here’s our round up of the buzziest new books arriving this season, across highly anticipated titles from best-selling writers, true crime, nonfiction and more.

The Japanese band Chai is a professional purveyor of whimsy.

The latest episode of “The Daily” is on life during the Israel-Gaza conflict.