We’re covering the difficult relationship between Russia and Belarus, and the U.S. moves to rebuild its ties with the Palestinians. 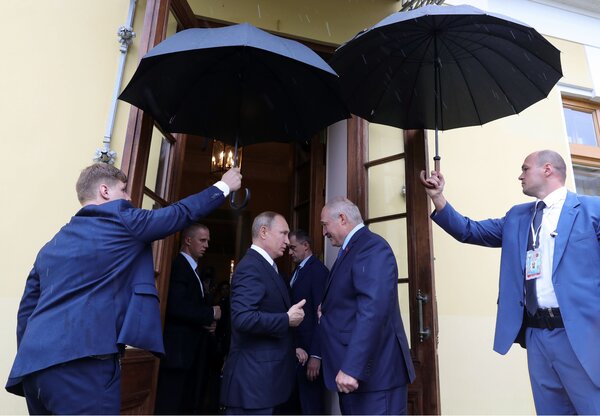 Belarus plane crisis is a new headache for Putin

Belarus’s diversion of a plane heading to Lithuania in order to arrest a journalist onboard opened a new chapter in the region’s most convoluted relationship: the one between Aleksandr Lukashenko, Belarus’s leader, and President Vladimir Putin of Russia.

The two are increasingly leaning on each other, though they have sharply diverging interests. Putin wants more influence on Belarus, and Belarus’s leader wants an ever-tightening iron grip. Belarus is a country of just 9.5 million people, but for Putin, it is both a critical ally and an enormous headache. (For those catching up, here’s what’s happening in Belarus.)

Putin’s choice: President Biden will hold his first face-to-face meeting with Putin in just three weeks. The Russian leader will have to decide how far he will go to continue supporting Lukashenko after the plane fiasco angered the West, at a time when Russian officials have telegraphed that they want to lower tensions with the U.S.

Related: Russia has raised the heat on Google, Twitter and Facebook in an online crackdown of criticism against the government.

U.S. Secretary of State Antony Blinken wrapped up a Middle East trip on Wednesday in which he met with Israel’s prime minister, Benjamin Netanyahu, and President Mahmoud Abbas of the Palestinian Authority, as well as leaders of Jordan and Egypt, after the trauma of the 11-day war between Israel and Hamas, the militant group that controls Gaza.

Blinken’s actions represented an attempt to revive America’s role as a neutral mediator in the conflict — a sharp turnaround from the Trump administration’s alignment with Israel.

U.S. moves: Blinken announced that the U.S. would reopen a consulate in Jerusalem to handle Palestinian affairs that had been shut by the Trump administration in 2019, and pledged $112 million in aid to the West Bank and Gaza.

The children who were killed: At least 66 children were killed in Gaza and two in Israel during the latest flare-up. Here are their stories.

Will the Tokyo Olympics happen?

It’s the question athletes and spectators around the world have been asking for months.

The organizers of the Olympics said last week that they had entered what they called “operational delivery mode,” another clear signal that they would plow ahead toward the opening ceremony, set for July 23.

But the public, prominent business figures and even the Asahi Shimbun newspaper, a partner of the Games, have come out against them, as a state of emergency is still in place in parts of Japan. The U.S. issued a high-level travel warning for the country last week.

The latest voice of warning came from public health specialists who wrote in a medical journal that the committee’s game plan for athlete safety did not go far enough to protect people amid the coronavirus crisis and did not heed lessons from other large sporting events.

President Biden asked U.S. intelligence agencies to “redouble their efforts” to determine the origins of the coronavirus, and called for a broad report to be completed in 90 days.

Lawyers for the E.U. say they will seek billions in penalties if AstraZeneca doesn’t deliver vaccine doses.

Testifying before lawmakers, Dominic Cummings, the former top aide to Prime Minister Boris Johnson, described chaos and incompetence at the heart of the British government during the early days of the pandemic.

Amazon announced it would acquire Metro-Goldwyn-Mayer, the 97-year-old film and television studio that is home to James Bond, “Thelma & Louise” and Rocky, for $8.45 billion.

WhatsApp sued India’s government over what it said were oppressive new internet rules that would require it to make people’s messages traceable.

A Dutch court ruled that Royal Dutch Shell, Europe’s largest oil company, must do more to reduce carbon dioxide emissions. The decision represented a breakthrough in terms of a court’s willingness to dictate what a big business must do to protect the climate.

Militants attacked a key town in Mozambique. We interviewed survivors and used videos, satellite imagery and tracking data to show how Mozambique’s government failed to protect its civilians.

“Friends: The Reunion,” arriving on HBO Max on Thursday, goes down the superexpressway of memory lanes, our critic writes.

Dai Guihua wished for a better life for her two children and husband in Langtang, a Chinese mountain town. But then her husband vanished, his white car plunging into a river, after they racked up steep medical bills for their daughter.

Twenty-two days after her husband disappeared, she walked to a pond and took her own life, as well as those of her son and daughter. Her story has became a symbol of the struggles of people in rural China left behind by the country’s economic boom.

Every weekday, I write this newsletter from New York, where I live, and today, I wanted to talk about how it feels as the city starts to emerge from more than a year of sickness, grief and isolation.

One year ago, I could not have imagined the things I have done in the past two weeks: got a drink with friends on a bar patio in Brooklyn, went to a birthday party, booked a ticket to see “Hamilton” on Broadway in October.

New York City feels different this month as it reopens. There was a time when you could scarcely believe that any improvement in the coronavirus numbers was going to last. For those of us who lived in the city while it was a global center of the pandemic, and heard ambulance sirens at all hours, it shifted our views of how much we could be protected from any global threat.

My friends who lived through Sept. 11 here have described a similar chill. They felt at once haunted by what they had seen, and also a little bit hopeful about how they saw everyone come together. And we did cling to a sliver of hope this past year: My neighbors cheered on health workers, volunteered to help people in need, did grocery shopping for the elderly, and later helped them make their vaccine appointments.

But now, I feel as if I must be dreaming when I see friends at restaurants, couples going on dates and strangers smiling at me without masks. Of course, it’s not all happy: There is an emptiness and a somberness for the many people who died. And for so many, like vulnerable people with illnesses and people who lost their incomes, vaccination has not been a fix-all.

Like every monumental shift, it is bittersweet. But for now, I am happy to hear laughter in the streets, to talk about something other than being overwhelmed and fearful, and to hear people planning for the future again. There is hope in New York. — Melina

This spicy red pesto pasta makes the most of sun-dried tomatoes, nuts and roasted red peppers.

In “The Unbroken Thread,” Sohrab Ahmari sees Western society as having overreached on freedom and lost a sense of being rooted in tradition and community.

Apple’s mobile operating system has been updated with new ways to open apps, chat with friends and interact with your device. Here’s how to make the most of your iPhone.

Here’s today’s Mini Crossword, and a clue: Like champagne in a bucket (five letters).

P.S. Karan Deep Singh, one of our correspondents in New Delhi, joined the Axios Re:Cap podcast to discuss the Covid crisis in India.

The latest episode of “The Daily” is about Hamas.

You can reach Melina and the team at [email protected].