We’re covering President Biden’s arrival in Europe on his first foreign trip, and the tiresome, recurring Covid restrictions in China. 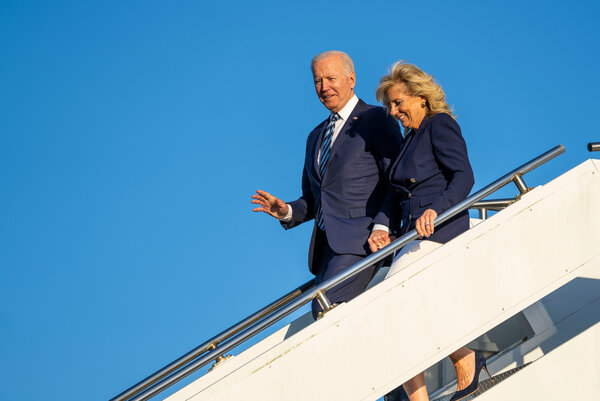 A high-stakes trip for Biden

President Biden arrived in Britain on Wednesday to attend a Group of 7 summit, followed by meetings with NATO and European Union leaders. Biden will announce, possibly as early as Thursday, that the White House has reached an agreement to provide 500 million doses of the Pfizer vaccine to 100 countries over the next year. We have live updates here.

European leaders are relieved to be dealing with a president who values alliances after former President Donald Trump called the E.U. a “foe” and dismissed NATO as “obsolete.”

But the talks aren’t going to be easy. Topics on the table include how to deal with Russia and China, the military withdrawal from Afghanistan and global warming. On the final day of his trip, in Geneva, Biden will meet with President Vladimir Putin of Russia.

Speaking to troops after landing in Suffolk, Biden called his weeklong diplomatic trip “essential,” and vowed to stand up to China and Russia.

I talked to Steven Erlanger, our chief diplomatic correspondent in Europe, about how the Trump years changed European views of the U.S.

What will it take for Biden to regain their trust?

He’s already started: in symbolism, language, the visits of his top officials to NATO and the E.U., and his own visit. In a world where the West is comparatively smaller and less economically dominant, he argues that allies who share the same view of global order should stick together.

How have European dynamics changed?

During Trump, Emmanuel Macron pushed the hardest for more European autonomy but the French president has not convinced many European allies.

Still, Macron believes that Biden is the past, not the future, and that an America turning more toward the Pacific means Europe must do more for its own interests and security.

Lockdowns, quarantines, mass testing: For more than a year, China has followed variations of that formula for dealing with the coronavirus — and a new outbreak suggests that they may be part of Chinese life for some time to come.

The latest cases have been found in Guangzhou, the capital of the southern province of Guangdong. The authorities have blamed the Delta variant, which was first detected in India. The city tested practically its entire population of 18.7 million between Sunday and Tuesday. It has also put neighborhoods of more than 180,000 residents under total lockdown.

Residents are growing tired of that pattern, and foreign businesses are getting worried that strict rules for international travelers — even vaccinated ones — might snarl plans.

Vaccines: The spread of the virus has raised fresh questions about the effectiveness of China’s vaccines, particularly against variants. Cases are also surging in Mongolia, where half the population has received the vaccine developed by the Chinese drugmaker Sinopharm.

Researchers found that in the two years before the pandemic, markets in the Chinese city of Wuhan were selling three dozen animal species that can harbor pathogens that jump to humans.

People receiving the AstraZeneca vaccine had a slightly increased risk of a bleeding disorder, according to a new study.

A court on Wednesday designated Aleksei Navalny’s political movement as extremist, a further blow to the opposition to President Vladimir Putin in Russia.

The move is also a message from Putin to President Biden that Russian domestic affairs are not up for debate. The two leaders will hold their first meeting next week in Geneva.

The case: Prosecutors had requested that the court outlaw Navalny’s movement, using a designation that likens its members to terrorists. The evidence was classified and the case heard behind closed doors in a Moscow courtroom.

Under Russia’s anti-extremism law, Navalny’s organizers, donors, or even social media supporters could now be prosecuted and face prison time.

At least 10 people were killed and 16 others wounded in an attack on staff members of the HALO Trust, a British-American charity clearing land mines in Afghanistan.

Canadians called for action against Islamophobia in the wake of the murder of a Muslim family in Ontario.

The head of the Committee to Protect Journalists stepped down after 15 years, offering a warning: “Governments are increasingly taking aggressive action toward journalists, and there are very few consequences.”

The SoftBank-backed delivery app DoorDash launched in Japan, joining a growing food delivery market that has hit its peaks in the pandemic.

President Biden revoked a Trump-era order that sought to ban the app TikTok. A new order will call for a security review of foreign-owned apps.

Many people have a vivid “mind’s eye,” but a team of British scientists has found that tens of millions of people cannot conjure images. The lack of a mental camera is known as aphantasia, and millions more experience extraordinarily strong mental imagery, called hyperphantasia. Researchers are studying how these two conditions arise through changes in the wiring of the brain.

How to sleep again

Your sleep habits may have suffered during the pandemic. We spoke to experts about building new and better habits to overcome “coronasomnia.” Here’s a sample.

Throw away your worries

Sit down with a blank piece of paper one to two hours before bed each night. Then write down all of your thoughts, especially anything that is bothering you. If most are worries, then crumple up the paper and throw it away.

At least 29 studies have found that daily exercise, regardless of the type or intensity, helps people fall asleep faster and stay asleep longer, especially among people who are middle-aged or older.

Serve Jamaican curry chicken and potatoes over rice or on its own.

P.S. Stella Bugbee, former editor in chief of The Cut, is joining The Times as the new head of our Styles desk.

The latest episode of “The Daily” is on a rare bipartisan agreement in the U.S. Congress on a big industrial policy bill meant to counter China.

You can reach Melina and the team at [email protected].