We’re covering the modest gains made at the Biden-Putin meeting and 600,000 Covid-19 deaths in the United States. 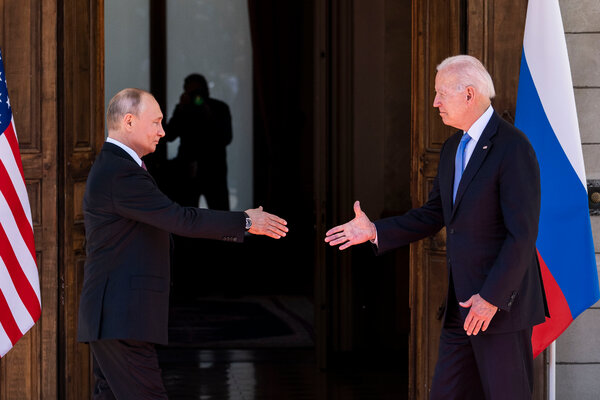 Biden and Putin did not find much common ground

President Biden described his meeting with President Vladimir Putin in Geneva as “positive” and the Russian leader said the talks were “constructive,” but it was clear that on issues ranging from cyberattacks to human rights, they remain profoundly divided.

Among the outcomes were agreements to open U.S.-Russia talks on cybersecurity and arms control and for ambassadors to return to their posts in Moscow and Washington. Here are the latest updates.

Cybersecurity worries: Putin denied Russian responsibility for a surge in cyberattacks against U.S. institutions and rebuffed U.S. criticism of human rights abuses. Biden said that he had handed the Russian leader a list of 16 examples of “critical infrastructure” that were “off-limits” to cyberattacks, and said he made clear that if they were attacked, “we have significant cyber capabilities” and would respond “in a cyber way.”

Impressions: “I did what I came to do,” Biden said after the summit. Speaking at a separate news conference, Putin said: “I think that in this situation, there can’t be any kind of family trust. But I think we’ve seen some glimmers.”

The United States reached 600,000 deaths from Covid-19, a once-unthinkable number and the highest death toll in the world.

Despite the somber milestone, virus cases and deaths in the U.S. have sharply fallen in recent months as vaccines have been distributed widely. Many people have shed their masks and resumed prepandemic lives, including in New York and California, which both fully reopened this week.

Some 53 percent of the total U.S. population has received at least one dose of the vaccine, far beyond global averages. But no country is out of the woods until more of the world is vaccinated, experts say. The Delta variant is gaining steam and has been labeled a variant of concern by the Centers for Disease Control and Prevention.

As the pandemic recedes in the U.S., there are growing calls for an investigative commission to provide an analysis of what happened and to prevent a repeat in the future.

Japan is pursuing vaccine diplomacy across Asia — getting shots to Vietnam, Taiwan, Indonesia, Malaysia, the Philippines and Thailand — even as its own vaccination campaign lags.

A worrisome flare-up in Gaza

International mediators rushed to calm tensions between Israel and Hamas on Wednesday, hoping to broker a longer-term truce after an eruption of hostilities overnight.

Israel said it carried out airstrikes in the Gaza Strip in response to incendiary balloons sent into southern Israel by Hamas, the militant group that controls the territory. The exchange was the first since an 11-day air war between the two sides last month.

Although no casualties were reported, the violence was a first test of the new Israeli coalition government just three days into its term. Its first major decision was to allow a provocative far-right Jewish march through the Palestinian areas of Jerusalem on Tuesday, despite threats from Hamas that it would retaliate.

The Chinese government said that “about five” of the uranium fuel rods inside a nuclear power plant in southeastern China had been damaged, but added that no radiation had leaked out of reactors at the site.

Declassified U.S. documents that were unearthed by a Japanese professor describe what happened to the remains of the wartime Japanese prime minister Hideki Tojo. U.S. military officials scattered his ashes in the Pacific Ocean shortly after his execution as a war criminal.

The Pentagon is developing a proposal to send dozens of Special Forces trainers back to Somalia to help local forces combat Al Shabab, the terrorist group affiliated with Al Qaeda.

His father vanished when he was 7 years old and, for decades, he was the great mystery of his life. The Times reporter Nicholas Casey wrote about the yearslong process of searching for his father. “I spent much of my life imagining who I was — and then becoming that person — through vague clues about who my father was,” he writes.

From the outside, Amazon appeared to be a rare pandemic success story; the company expanded its work force, broke shipping records and earned far more income than it ever had before. But as our colleagues reported this week, warehouse workers have quietly paid a price. Shira Ovide, who writes the On Tech newsletter, spoke to the reporter Karen Weise about the investigation.

You found that Amazon had to replace more than the equivalent of its entire hourly work force in a single year. That is stunning. Is Amazon pushing them out or are they quitting?

Both. Amazon hires so many people, often with no in-person interview and little vetting, and it loses a significant number of workers within the first couple of weeks after they’re hired. We’ve heard of people walking out on their lunch break on their first day of orientation. That creates a tremendous amount of turnover and some chaos in the workplace.

Is the high rate of employee turnover intentional?

David Niekerk, a former Amazon vice president who built the warehouse human resources operations, said that Jeff Bezos didn’t want lengthy tenure for hourly employees. Company data showed that employees were less engaged over time, and Amazon wanted people who would push to go above and beyond.

Maybe Amazon doesn’t want to have so many people leave every year, but changing that is not the No. 1 priority, either. Amazon churns through so many employees that I’ve heard numerous Amazon executives or Seattle business leaders describe a nagging fear that the company will run out of Americans to hire.

This sesame snap pea-chicken salad is simple. Blanching the peas and poaching the chicken take it up a notch.

“A Sense of Self,” Veronica O’Keane’s book about the brain and memory, is a remarkable blend of narrative skill and science, our reviewer writes.

As couples emerge from pandemic seclusion, experts suggest sitting down and looking at what worked — and what didn’t — during the time hunkering down together. Here are other ways to reset your relationship.

That’s it for today’s briefing. See you next time. — Melina and Matt

P.S. Chris Buckley, our China correspondent who was forced to leave the country last year, was awarded the Don Bolles Medal for “extraordinary courage in standing up to intimidation or efforts to suppress the truth.”

The latest episode of “The Daily” is about the war in Ethiopia’s Tigray region.

You can reach Melina, Matt and the team at [email protected].