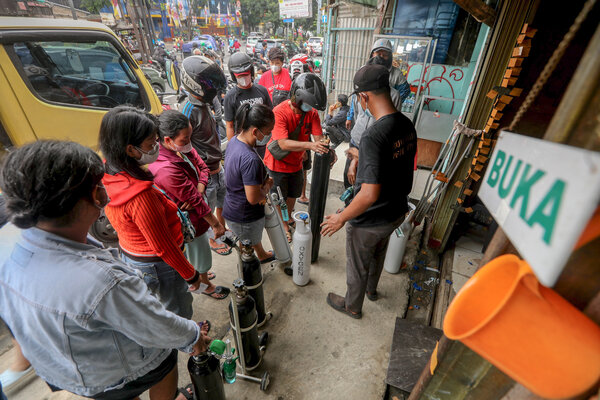 A global virus surge, powered by the Delta variant

A year and a half since it began, the pandemic is on the rise again in much of the world, driven largely by the highly contagious Delta variant and other new types. Scientists believe that variant, first identified in India, may be twice as transmissible as the original coronavirus.

In Indonesia, as oxygen and vaccine supplies dwindle, grave diggers are working into the night. In Europe, countries are imposing quarantines and travel bans. And in countries like South Korea and Israel that seemed to have largely vanquished the virus, new clusters of disease have proliferated.

Unvaccinated populations may serve as incubators of new variants that could evolve in surprising and dangerous ways, with Delta giving rise to what Indian researchers are calling Delta Plus. There are also the Gamma and Lambda variants.

Quotable: “We’re in a race against the spread of the virus variants,” said Kim Woo-joo, an infectious disease specialist in Seoul.

As Russia struggles to contain a harrowing new wave of coronavirus infections, President Vladimir Putin urged Russians to get vaccinated with one of the country’s four domestically produced shots.

In the U.S., the director of the C.D.C. reiterated that vaccinated people did not need masks in most situations. Here are some answers to common questions about masks, the Delta variant and breakthrough infections.

As Italy reopens to tourists, glamorous Capri and its quieter, grittier sister, Procida, prepare — with joy and trepidation — for an influx of visitors.

Hundreds of deaths in British Columbia have been linked to a heat wave that has roasted parts of Western Canada, breaking heat records three days in a row and sending thousands scrambling for relief.

Parts of Washington State and Oregon have also been battered by extreme heat several days in a row. President Biden met with state leaders and pledged aid to try to minimize weather-related disasters. California is bracing for another summer of destructive fires, and punishing drought conditions are gripping the American West.

Deaths: British Columbia’s chief coroner said 486 deaths had been reported over six days, while typically about 165 deaths would have been reported in that time. Deaths were expected to increase, she said.

A warming planet: The seven warmest years in the history of accurate temperature record-keeping have been the last seven years, and 19 of the 20 warmest years have occurred since 2000.

From Opinion: With Democrats holding the White House and controlling Congress, this may be the last best political opportunity for the U.S. to do something big on the climate, writes Farhad Manjoo.

Bill Cosby was freed from prison after the Pennsylvania Supreme Court overturned his conviction for sexual assault.

The entertainer had served three years of a three- to 10-year sentence when the court ruled that Cosby, 83, had been denied a fair trial in 2018. His case represented the first high-profile sexual assault trial to unfold in the aftermath of the #MeToo movement.

The court wrote that a “non-prosecution agreement” that had been struck with a former district attorney meant that Cosby should not have been charged. It also barred a retrial. Read the full 79-page opinion.

“Overwhelmed and devastated”: Many of the women who accused Cosby of sexual misconduct, and worse, said they were disheartened by the ruling. One said she worried it could discourage other women from pursuing prosecutions in cases of sexual assault.

A war-crimes tribunal in The Hague yesterday convicted two former Serbian officials of aiding and abetting war crimes committed in the wars that ravaged the Balkans in the 1990s.

The known death toll in the collapse of a condominium building north of Miami Beach rose to 18, including two children. This visualization shows the apartment locations of the known missing and the confirmed dead.

A day after Ethiopian troops withdrew from the Tigray region, Prime Minister Abiy Ahmed denied that they had been defeated by rebels.

Britain and the E.U. agreed to a three-month delay in regulations that would ban shipments of chilled meats from mainland Britain to Northern Ireland, in what has become a key issue in ongoing Brexit negotiations. Above, a butcher in Belfast.

A new Biden administration rule would create a gender marker on passports and citizenship certificates for people who identify as nonbinary or intersex — X, rather than M or F.

The father of Britney Spears called for an inquiry into her claims that she was being abused under the conservatorship.

After slippery conditions caused injuries in back-to-back matches at Wimbledon on Tuesday, the All England Club defended the condition of its grass courts.

Earthquakes are the other potential catastrophe at the Olympic Games, which begin this month. Organizers hope that any tremors will be small ones, but they’re preparing for anything.

The Tokyo Olympics offer an opportunity to inspire Japanese girls with athletic aspirations. But outside of the Games, female athletes are limited by Japanese society’s rigid gender norms.

The police in France arrested a woman who they said held up a sign and caused a serious crash at the Tour de France on Saturday.

Donald Rumsfeld, the U.S. secretary of defense for two presidents, has died at 88. He was in charge of the invasion of Iraq under George W. Bush.

The Times spent nearly six months analyzing thousands of videos of the Capitol riot. Our 40-minute video reconstruction provides the most complete picture yet of what happened on Jan. 6. Watch it here and scan through some of the key takeaways.

Why many tennis pros barely scrape by

In pro tennis, the biggest stars earn fortunes in prize money and endorsements. But for the rank-and-file, the sport is far less lucrative: After travel, coaching and other expenses, most players barely scrape by.

“If you are not in the Top 100, you are basically not making any money,” Vasek Pospisil, a Canadian player who has been ranked as high as 25th in the world, said. Contrast that with the N.H.L., Pospisil noted, which has roughly 700 players and a guaranteed minimum salary of $700,000.

The inequality also means many players lack the resources to improve. “The players ranked 150 to 250 are on the cusp of breaking through, but they need to be able to invest in themselves,” Gaby Dabrowski, another player, said. “You need a coach to guide you, to have a vision for your tennis, to see your blind spots, and you need money for that.”

One thing that separates tennis from many other sports is that its players are not in a union. Last year, Pospisil and Novak Djokovic announced the formation of the Professional Tennis Players Association, which would negotiate on players’ behalf.

The fledgling organization has yet to win the support of other top players on both the men’s and women’s sides. And it faces opposition from the game’s most powerful institutions. For more, read Michael Steinberger’s story in The Times Magazine.

These turkey pitas with tahini have all the flavors of falafel, without the frying. Find more no-cook recipes for a heat wave here.

Turn your phone into a virtual fitness coach.

“White on White,” the slow-burn second feature from the Spanish-Chilean director Théo Court, is distressingly beautiful and subtly provocative, writes our critic.

P.S. The Times won an award from the Society of Publishers in Asia for its visual investigation on how China is using forced Uyghur labor to produce masks.

The latest episode of “The Daily” is about an unclassified report on U.F.O.s.

Sanam Yar wrote today’s Arts and Ideas. You can reach Natasha and the team at [email protected].