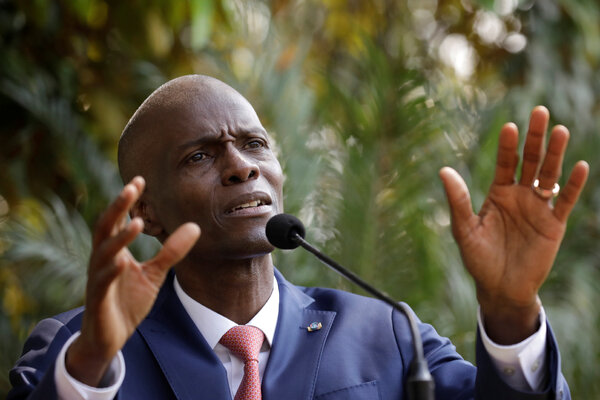 Four people suspected of being involved in the assassination of President Jovenel Moïse of Haiti were shot dead by the police and two others were arrested, Haiti’s police chief said late last night.

A group of assailants had stormed Moïse’s residence on the outskirts of the capital, Port-au-Prince, early on Wednesday, killing him and wounding his wife, Martine Moïse, in what officials called a well-planned operation that included “foreigners” who spoke Spanish.

During his time in office, Moïse, a former banana exporter, was widely seen as behaving like a strongman who tried to consolidate power. He was also accused of using powerful, violent gangs to suppress political opposition.

Context: In recent months, as poverty and hunger rose, protesters had called for Moïse to step down. Armed gangs had taken greater control of the streets, terrorizing poor neighborhoods and sending thousands fleeing.

Response: Millions of Haitians anxiously huddled around radios and televisions throughout Wednesday, listening for updates. Among the diaspora, both opponents and supporters of Moïse saw his assassination as a sign of worse turmoil to come.

A coalition of 130 nations is working to overhaul the global tax system that Ireland has depended on to lure hundreds of U.S. multinationals trying to reduce the taxes they pay.

At 12.5 percent, Ireland’s low official corporate tax rate helps global companies avoid paying taxes to other countries where they make profits, a setup that has contributed billions to Ireland’s tax coffers and created hundreds of thousands of jobs there.

“Ireland is very much a tax haven operating in Europe, so it makes sense that Ireland will resist this as hard as they can,” said Alex Cobham, the head of an advocacy group that fights tax avoidance. “If the model is breaking, they need to look like they are defending it as much as possible.”

Details: Only nine countries, including Ireland, declined to sign on to the sweeping framework worked out last week that could undermine those advantages. The accord would impose a new 15 percent global minimum corporate tax rate and would require technology and retail giants to pay taxes where their goods or services were sold.

Vaccines against the variants

Several studies indicate that most Covid-19 vaccines are very effective at keeping people out of hospitals and have generally protected them against the Delta variant, which is now the dominant version of the virus in the U.S.

The numbers vary from country to country. British studies found that two doses of the Pfizer-BioNTech shot had an effectiveness rate of either 79 percent or 88 percent at protecting against symptomatic disease. A team of researchers in Canada pegged that vaccine’s effectiveness at 87 percent, while in Israel, its effectiveness was 64 percent against all coronavirus infections.

Although the variation in those numbers might seem confusing, vaccine experts say it should be expected, because it’s hard for a single study to pinpoint the effectiveness of a vaccine.

Quotable: “Their overall implications are consistent: that protection against severe disease remains very high,” said one professor at the Johns Hopkins Bloomberg School of Public Health.

The U.S., as part of its commitment to sending vaccines to countries in need, will ship one million doses of the Johnson & Johnson vaccine to Bolivia.

Spain reported some of its highest levels of new infections since February. The government intends to distribute five million antigen test kits to regional administrations to identify asymptomatic cases among younger people.

The number of coronavirus cases in Germany ticked up again on Wednesday after more than two months of steady decline.

Jacob Zuma, the former South African president, was taken into custody. A court last month ordered him imprisoned for 15 months for failing to appear before a corruption inquiry.

More than three months after it blocked the Suez Canal, the Ever Given container ship finally began its journey out yesterday, after the Egyptian authorities reached a compensation agreement with its owners.

Since an anticorruption activist died in the Palestinian Authority’s custody, protests in the West Bank against its increasingly autocratic, brutal rule have been harshly suppressed.

Bill Gates and Melinda French Gates, who plan to divorce, will work together at the philanthropic foundation they lead for at least two more years.

Donald Trump sued Facebook, Twitter and Google on Wednesday over steps the platforms had taken to ban him or block him from posting.

With the death toll at 54 and with 86 people unaccounted for nearly two weeks after a condo building collapsed, officials are ending the search for survivors in Surfside, Fla., and will shift to recovery efforts.

England beat Denmark, 2-1, and advanced to the Euro 2020 final against Italy, which beat Spain. Catch up on live updates.

Roger Federer, who turns 40 next month, lost his quarterfinal match at Wimbledon to the 14th-seeded Hubert Hurkacz. Novak Djokovic advanced to the semifinals.

Bryce Wettstein, who is still in high school and started skating at 5, is heading to the Summer Olympics as the top-ranked American in women’s park skateboarding.

The sprinter Sha’Carri Richardson, who failed a drug test for marijuana, will miss the Tokyo Olympics, as officials did not choose her for the U.S. relay team.

At 17, Dara McAnulty is fast becoming one of the most acclaimed nature writers in Britain and Ireland for passionate work that is open about his autism.

“Dandelions remind me of the way I close myself off from so much of the world,” he writes in his award-winning first book, “Diary of a Young Naturalist,” “either because it’s too painful to see or feel, or because when I am open to people, the ridicule comes.”

Inspired by the Eurovision Song Contest, the A.I. Song Contest is an international competition, now in its second year, that explores the use of artificial intelligence in songwriting. It provokes the question: Can robots make meaningful art?

“Robots can’t sing,” said Justin Shave, of the Australian music and technology company Uncanny Valley, which won last year’s contest. “I mean, they can,” he added, “but at the end of the day, it just sounds like a super-autotuned robotic voice.”

Instead, most entries combined A.I.-generated song components with performances (or sometimes just finesse) from human musicians. This year’s winner, “Listen to Your Body Choir,” has been praised for its “rich and creative use of A.I.,” in which a robotic voice intertwines with the human sound.

The contest welcomed 38 entries from teams and individuals around the world. They used deep-learning neural networks that mimic the operations of a human brain to analyze data, identify patterns and generate drumbeats, melodies, chord sequences, lyrics and even vocals.

While none of the songs are likely to break the Billboard Hot 100, the contest’s lineup offered an intriguing and varied glimpse into the results of experimental human-A.I. collaboration in songwriting, and the potential for the technology to further influence the music industry.

Read the full article and listen to the winning song.

The strikingly simple dish known as oeuf mayonnaise is so beloved in France that there’s an association dedicated to its protection.

The Cannes Film Festival kicked off with a five-minute standing ovation for “Annette,” the Adam Driver-Marion Cotillard musical. Here are more highlights from opening night.

Revel in the subversive joy of Lil Nas X’s gay pop stardom — or take five minutes to fall in love with symphonies.

P.S. Kate Kelly, who covers Wall Street for the Business desk, will join the Washington bureau to cover lobbying, big money and the world of influence.

The latest episode of “The Daily” is about a much-debated Alzheimer’s drug.