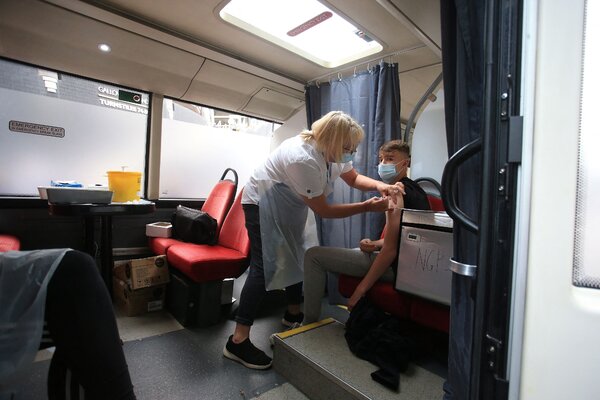 The rise and fall of the Delta variant

Scientists are struggling to understand why Delta outbreaks in Britain and India dissipated, even if temporarily, and what that may mean for similar surges around the world.

In the U.S., the variant’s pace has slowed. The number of infections over the last week is 14 percent higher than it was two weeks ago, but new cases are falling in some states, like Missouri, that Delta struck hard. Some forecasters are predicting that cases will rise overall in September.

The Delta variant is thought to be more contagious than other variants because it is carried in greater amounts in a person’s airways, making it adept at exploiting opportunities for transmission. But even modest restrictions, like masking and distancing, can bring numbers back down.

Ending Delta: New Zealand, which is currently battling an outbreak of more than 700 people, is attempting what no other country has so far accomplished: eliminating the variant altogether.

Italy introduced a quarantine rule for unvaccinated travelers, after the E.U. dropped the U.S. from its list of safe countries.

Breakthrough infections among people who have already been vaccinated are less likely to lead to long Covid, a study suggests.

Germany will go to the polls on Sept. 26 for its most important election in a generation, to replace Chancellor Angela Merkel after 16 years. No party is polling at more than 25 percent, and the more liberal Social Democrats have overtaken the conservative Christian Democrats for the first time in years.

While the election itself may be exciting, the two leading candidates are anything but. Armin Laschet, the Christian Democrats’ candidate, and Olaf Scholz, a Social Democrat who is currently finance minister and vice chancellor, are both suit-wearing career politicians over 60, neither of whom is known for his charisma.

But a bold vision for change is not typically a vote winner in Germany. Konrad Adenauer, the first postwar chancellor, won an absolute majority for the Christian Democrats by promising “No Experiments.” Helmut Schmidt, a Social Democrat, once famously said, “If you have visions you should go to the doctor.”

Analysis: “There are few countries where such a premium is put on being dull,” said Timothy Garton Ash, a European history professor at the University of Oxford. Germany has a distinctive political tradition of change through consensus, embodied most recently by Merkel herself.

Can the U.S. military work with the Taliban?

The Pentagon’s top two leaders have expressed wariness about continuing to cooperate with Taliban leaders who helped provide safe passage to more than 124,000 people evacuated out of the country. See scenes from Afghanistan, two days after the U.S. exit.

Asked if the U.S. military would cooperate with the Taliban in fighting the Islamic State group that claimed responsibility for the attack outside Kabul’s airport last week that killed 13 American troops and more than 170 Afghans, Mark Miller, a top Pentagon official, said, “It’s possible.” He added: “In war, you do what you must.”

The Taliban are preparing to set out their new Islamic government imminently, naming Sheikh Haibatullah Akhundzada, the top religious leader, as the country’s supreme authority.

Refugees: Few options remain for Afghans wishing to flee the Taliban. E.U. ministers have pledged to increase humanitarian aid for Afghanistan and its neighbors, but have not agreed on amounts or on a common approach to resettling Afghan refugees.

U.S. politics: President Biden’s push to leave Afghanistan has put him at odds with much of the political establishment, on the right and left. Separately, some Republicans have flip-flopped on bringing U.S. troops home — making it difficult to discern what they actually believe.

A near-total ban on abortions took effect in Texas after the Supreme Court refused to block it. In its next term, the Supreme Court will determine the fate of Roe v. Wade, the 1973 decision that established a constitutional right to abortion.

A judge approved a plan to dissolve Purdue Pharma and require its owners, the Sackler family, to pay $4.5 billion to settle opioid claims. The plan largely absolves the Sacklers of liability.

Nearly one million homes and businesses in Louisiana are still without power, days after Hurricane Ida tore through the state.

A Times investigation shows how faulty design and construction could have contributed to the deadly collapse of the Champlain Towers South condo in South Florida.

President Biden met with Ukraine’s president, Volodymyr Zelensky, and condemned “Russian aggression.” The U.S. has committed to a $60 million military aid package to help the country to fend off Russia.

Companies are calling on the White House to drop tariffs on Chinese goods and provide clarity on a critical trade relationship. Separately, Alibaba is facing a reckoning over workplace abuses.

Three police officers and two paramedics have been charged in the 2019 death of Elijah McClain, a Black man whom the police restrained using a chokehold.

Despite its tech-savvy image and economic heft, Japan is a digital laggard — and a persistent gender gap is stopping progress.

The British TV personality Piers Morgan was cleared by Britain’s communications regulator over critical comments he made on air about Meghan, the Duchess of Sussex.

At the U.S. Open, Naomi Osaka advanced to the third round after her opponent withdrew. Read about how the defending champion got her start playing with her family in a New York City park. Our tennis coverage is here.

As a producer on the new television series “Impeachment,” Monica Lewinsky is hoping to reframe her story and lift her Hollywood career. But that doesn’t mean the experience has been easy.

“When you have made a colossal mistake like I did so early in your life, and lost so much because of it, the idea of making a mistake is catastrophic,” she said. “And yet in order to move forward, I have to take risks.”

The many lives of fake art

What happens to works of art that turn out to be fake? In many cases, they re-enter the market: One art dealer has been offered the same fake Egon Schiele painting 10 times by 10 different collectors.

Since what determines a fake is often nothing more than an expert’s opinion, owners who have paid a lot for a work are not always ready to believe that they have been duped. Many of the works are recycled to unsuspecting buyers, as Milton Esterow reports in The Times. Some universities also have fakes in their collections that they use as study tools.

“We have about 1,000 objects that were donated as fakes by dealers, collectors and auction houses,” Margaret Ellis, a professor at New York University, said, adding, “These help students know what they are looking at and can be extremely educational when you put them side by side with the real work.”

Perhaps the most interesting fate for an art fake is to become a set dressing in an F.B.I. sting. The agency keeps thousands of fakes in storage — and once used six in a case that involved five bikini-clad undercover agents, a yacht off the coast of Florida and two very real French mobsters.

This fruit-filled dish is truly one of the easiest company-worthy chicken meals out there.

Taking a quick picture with your phone? Here’s how to nail the shot.

Here’s today’s Mini Crossword, and a clue: Bone in the leg (five letters).

The latest episode of “The Daily” is about lost education during the pandemic.

Sanam Yar wrote today’s Arts and Ideas. You can reach Natasha and the team at [email protected].