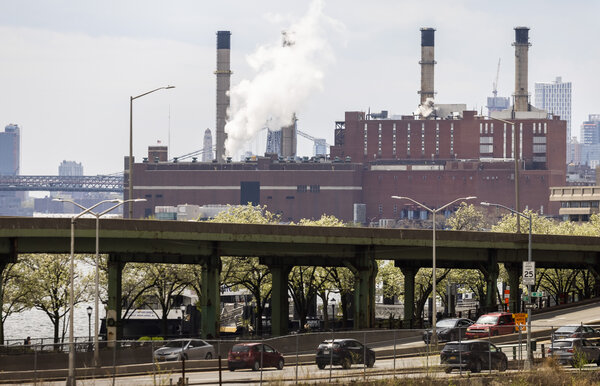 President Biden will pledge today to cut U.S. emissions nearly in half by the end of the decade, a target that would require transformative change to the American economy and way of life.

The target is timed to a closely watched two-day summit meeting, beginning on Earth Day, that Mr. Biden is hosting to show that the U.S. is rejoining international efforts to combat climate change.

The leaders of nearly 40 other countries will also attend, including those of Brazil, China, India and Canada, the only Group of 7 nation whose greenhouse gas emissions have increased since the Paris agreement. Brazil is seeking billions from the international community to support its promise to end illegal deforestation by 2030, a pledge that has been met with skepticism.

Challenges: To meet the goal, which nearly doubles a prior pledge made by the Obama administration, significant actions across the U.S. economy would be required, particularly involving cars and power plants, the two biggest sources of emissions.

Big topic for small people: Explaining climate change to kids can be challenging. Here’s our guide especially for them.

India faces the world’s fastest-growing Covid-19 crisis, with new daily coronavirus cases nearing 300,000 on Wednesday and surpassing even the records from the height of the U.S. surge.

The country’s health care system is buckling under the strain, with one of the most alarming aspects of India’s second wave being a dwindling oxygen supply. Many hospital officials said they were just hours away from running out, and 22 people died from loss of oxygen in one hospital after an accident.

Course of action: In a televised address, Mr. Modi urged people to be more careful but said that lockdowns were a last resort. States and cities are increasingly declaring them on their own. The second-largest state, Maharashtra, was expected to announce a 15-day lockdown.

Travel restrictions: The outbreak prompted neighboring Sri Lanka to postpone plans for a travel bubble. France said travelers from India would have to complete a 10-day quarantine. Britain has also imposed such restrictions, and the U.S. is advising against travel to India.

Researchers have found no evidence that the Pfizer-BioNTech or Moderna vaccines pose serious risks during pregnancy.

New coronavirus cases around the world have reached a weekly record, according to data from the World Health Organization.

President Biden said the U.S. had administered 200 million vaccine shots since he took office, though the rate of daily vaccinations has fallen slightly this week.

Putin’s stern warning to the West

In his annual state-of-the-nation address, President Vladimir Putin warned the West not to cross what he called a “red line” or risk provoking a powerful “asymmetric” response from Russia. He reminded Western leaders once again of the fearsomeness of his country’s modernized nuclear arsenal. And he asserted Russia’s moral superiority over the West.

But on the country’s streets, thousands of citizens defied a heavy police presence to challenge his rule, as rallies organized to protest the prison treatment of the prominent opposition leader Aleksei Navalny seemed to mushroom into something more. Before the rallies, the authorities had arrested dozens of protest leaders in 20 cities.

Tensions: Ukraine’s president, Volodymyr Zelensky, warned on Tuesday of a possible war with Russia. In a national address, he said Moscow’s buildup of troops on the border had created “all the preconditions for escalation.” (See pictures from the front line.)

At home: Mr. Navalny said in a letter posted by his team that he was like “a skeleton walking.” He is insisting that he be allowed to be seen by doctors of his choosing.

Reaction to the proposal had been scathing, from soccer fans and other clubs alike.

Prime Minister Boris Johnson of Britain used the fiasco to seize the moral high ground on an issue that matters to many voters, positioning himself as the defender of working-class soccer fans.

“For all the work they had done, for all the millions they had spent, for all the legal documents they had filed, nothing about this project seemed complete,” Rory Smith, our chief soccer correspondent, writes in this piece about a bathetic 48 hours in the sport.

The U.S. Justice Department, headed by Attorney General Merrick Garland, above, is opening a broad investigation into the Minneapolis Police Department, Mr. Garland announced, a day after the former officer Derek Chauvin was convicted of murder in the death of George Floyd.

President Biden plans to designate the Ottoman Empire’s killings of Armenian civilians during World War I an act of genocide. He would become the first sitting U.S. president to do so.

The Taliban have been recording and contesting every perceived U.S. violation of the troop withdrawal deal.

Because of coronavirus restrictions, the British Town Crier Championships will be held silently for the first time, with entrants judged on written proclamations of no more than 140 words. Above, a town crier announcing the birth of a son to Prince Harry and Meghan in 2019.

In one of the most staggering phone cons ever to hit Hong Kong, a 90-year-old woman was swindled out of $33 million over five months.

Harry Uzoka was a shining star of a tight-knit group of rising Black male models in London. He seemed wholly destined for greatness until, at 25, he was killed by another Black model, George Koh.

From prison, Koh still sounds bewildered by what he has done. “I kind of thought, OK, let me just show Harry that I’m a big man — and that’s how it escalated.”

The science of climate change, explained.

Here’s an excerpt from our climate team’s definitive answers to big questions about our warming world — and how we know what we know.

How bad are the effects of climate change going to be?

It depends on how aggressively we act to address climate change. If we continue with business as usual, by the end of the century, it will be too hot to go outside during heat waves in the Middle East and South Asia. Droughts will grip Central America, the Mediterranean and southern Africa. And many island nations and low-lying areas, from Texas to Bangladesh, will be overtaken by rising seas.

Conversely, climate change could bring welcome warming and extended growing seasons to the upper Midwest, Canada, the Nordic countries and Russia. Farther north, however, the loss of snow, ice and permafrost will upend the traditions of Indigenous peoples and threaten infrastructure.

What will it cost to do something about climate change, versus doing nothing?

One of the most common arguments against taking aggressive action to combat climate change is that doing so will kill jobs and cripple the economy. But that implies that there’s an alternative in which we pay nothing for climate change. And unfortunately, there isn’t.

In reality, not tackling climate change will cost a lot and will cause enormous human suffering and ecological damage, while transitioning to a greener economy would benefit many people and ecosystems around the world.

Give the classic fast-food fried fish sandwich a bit of oomph with capers, shallots and fresh dill. (Pair with this great read on the McDonald's Filet-O-Fish.)

This month’s under-the-radar streaming gems include “Skate Kitchen,” a coming-of-age story about a group of female skateboarders, and the horror thriller “The Wailing.”

Stained glass that breaks all the rules.

P.S. The Times has made its data set on coronavirus cases in U.S. correctional facilities publicly available.

The latest episode of “The Daily” is about the guilty verdict for Derek Chauvin.