Yoshihide Suga, TikTok, Venus: Here’s what you need to know.

We’re covering the challenges facing Japan’s next prime minister, an upcoming test for the proposed deal between TikTok and Oracle and a cool reception in China for Disney’s “Mulan.” 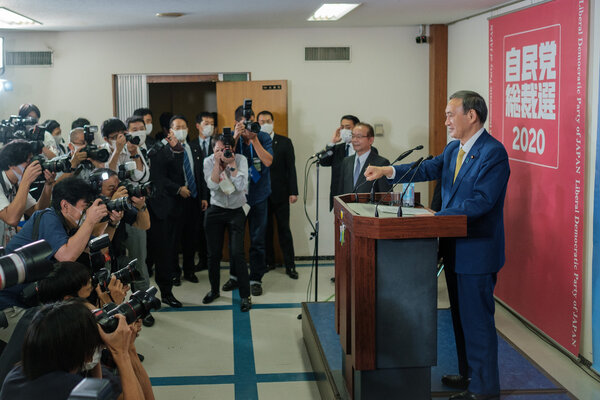 Mr. Suga, the longtime chief cabinet secretary to Prime Minister Shinzo Abe, swept an election for the leadership of the conservative Liberal Democratic Party — all but assuring that he will become prime minister after a vote in Parliament in the coming days.

Mr. Suga, 71, should have little trouble sliding into the job, our correspondents write. He has vowed to pick up where Mr. Abe left off.

A bland politician?: While most leading Japanese lawmakers come from elite political families, Mr. Suga is the son of a strawberry farmer and a schoolteacher from the rural north. But in many ways, he seems like yet another in a long line of dour Japanese politicians. The most exciting recent revelation about Mr. Suga, a teetotaler with a sweet tooth, was that he starts and ends each day with 100 situps.

Challenges ahead: One major question is just how long he will last. Though he is seen as a safe pair of hands to grapple with the country’s economic and strategic challenges, Mr. Suga’s longevity may be determined by his handling of the coronavirus pandemic, the postponed Tokyo Olympics and the country’s increasing tensions with China.

TikTok deal with Oracle advances to next test

ByteDance, the Chinese owner of TikTok, has chosen Oracle to be the app’s partner for its U.S. operations and has rejected an acquisition offer from Microsoft.

A U.S. committee will review the proposal for the potential tie-up and make a recommendation about it to President Trump this week, Treasury Secretary Steven Mnuchin said on Monday. The companies have until Sept. 20 to reach an agreement that satisfies the Trump administration’s concerns that TikTok poses a national security threat. The arrangement would most likely give Oracle oversight over data on American users.

What’s at stake: For ByteDance’s founder, Zhang Yiming, the deal could determine whether his eight-year-old company becomes a global digital colossus or is reduced to a mere power player in China, where the internet market is maturing and competition is becoming more intense. Any resulting deal could still be a geopolitical piñata between the U.S. and China. You can read more about TikTok in our DealBook newsletter.

TikTokers have their say: In this Op-Ed video, a group of highly influential TikTokers from across the U.S., with followers in the millions, argue that you should care about what happens to the app, even if you don’t use it.