A backlash against Chinese vaccines.

We’re covering doubts in some countries about China’s vaccines, Moderna’s move to develop a Covid-19 booster shot and a new China-India border clash. 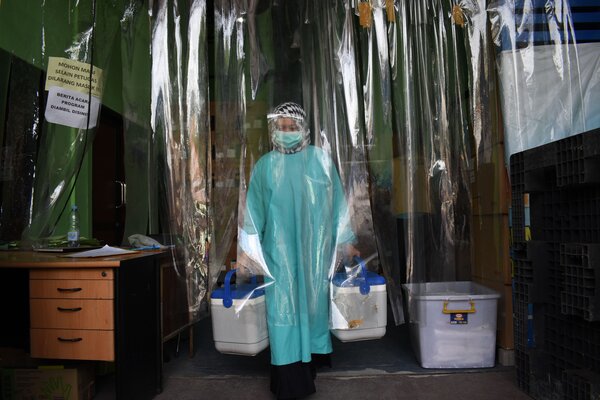 A backlash abroad over China’s vaccines

China’s coronavirus vaccines were supposed to showcase the country’s scientific prowess and generosity. Instead, in some places, they have set off a backlash.

Delays, inconsistent data, spotty disclosures and the country’s attacks on Western rivals have marred an effort by Beijing to portray itself as a leader in global health. Recent studies showing that the one of the vaccines has an efficacy rate of just over 50 percent — much lower than earlier claimed — have caused some concern.

Governments in Malaysia and Singapore are now having to reassure their citizens the vaccines are safe, and Philippine lawmakers are criticizing the government’s decision to purchase the vaccine made by Sinovac, a Chinese company. Sinopharm, a state-owned vaccine maker, and Sinovac have said they can produce up to two billion doses this year.

Details: Officials in Brazil and Turkey have complained that Chinese companies have been slow to ship the doses. At least 24 countries signed deals with Chinese vaccine companies after they were pushed out of the market for Moderna and Pfizer jabs by richer countries.

China’s response: The state news media started a misinformation campaign against the American vaccines, questioning their safety. Their videos have been shared by the U.S. anti-vaccine movement.

Moderna said Monday that its vaccine is effective against the coronavirus variants that have emerged in Britain and South Africa. But it appears to be less protective against the South Africa variant, and so the company is developing a new form of the vaccine that could be used as a booster shot.

Australia on Monday approved the Pfizer-BioNTech vaccine for use among people 16 and older, the country’s first coronavirus vaccine approval. Vaccinations are set to start late next month.

Indian media outlets and independent military analysts said that the skirmish between Chinese and Indian troops along their disputed Himalayan border happened several days ago, and that soldiers on both sides were wounded, although no fatalities were reported.

Details were sketchy and Indian officials played down the latest clash that came as Beijing is intensifying pressure against India with new incursions into territory claimed by both sides.

Two Indian government officials in another mountainous border state, Arunachal Pradesh, said the Chinese had recently built villages in disputed areas along the border in places that used to have just a few remote military posts.

Bigger picture: Tensions are still simmering between the two countries, which fought a war in 1962 and have been eyeing each other across their unresolved frontier ever since. In June, a brawl resulted in the deaths of more than 20 Indian soldiers and an unknown number of Chinese troops. As many as 100,000 troops are facing off in the Ladakh region, experts say.

China overtakes U.S. as a magnet for investors

China has for the first time surpassed the U.S. as the top destination for foreign direct investment, an important measure of a country’s economic health.

Foreign investment in the U.S. fell by 49 percent in 2020 to $134 billion, according to figures released by the United Nations Conference on Trade and Development. China notched a slight 4 percent rise to $163 billion, led by investments in the country’s high-tech sector and in mergers and acquisitions.

Foreign direct investment plunged for most countries as they struggled to contain the virus. Investment in Europe was wiped out, and globally, the flow of foreign investment altogether fell by 42 percent.

Context: For years, China’s manufacturing and rising consumer base have attracted foreign companies, but stringent guidelines around foreign ownership discouraged some. Now, the clout of Chinese consumers is becoming too hard to ignore.

Dr. Anthony Fauci, the top U.S. infectious disease expert, has been an adviser to seven presidents. But the past year has stood out to him like no other. While his calm counsel endeared him to many Americans, the politicization of the pandemic made him a villain to others — so much so that he received death threats.

In a wide-ranging interview, Dr. Fauci described the toll of the past year. He never thought of quitting: “I think in the big picture, I felt it would be better for the country and better for the cause for me to stay.”

South Korean actress’s death: Song Yoo-jung, 26, was found dead on Saturday in Seoul. No cause of death was disclosed, but the case followed a string of suicides in the country by young entertainers.

U.S. military transgender ban: President Biden reversed his predecessor’s ban on transgender troops serving in the military. The swiftness signaled a willingness by the new administration to put its own stamp on Defense Department social issues.

Snapshot: Above, Salisbury cathedral, which has become a vaccination site in England. During inoculation sessions, organists play everything from hymns to fairground tunes. People getting vaccinated say it provides a soothing backdrop.

What we’re listening to: NPR’s Embedded podcast, great for in-depth contextual looks at major news stories that give you a sense of history.

Cook: This kale salad with cranberries, pecans and blue cheese is a no-recipe recipe. It invites you to improvise in the kitchen.

Watch: “Atlantis,” Ukraine’s official entry for the Best Foreign Language Film Oscar this year, is set in 2025, in the aftermath of an incredibly destructive war between Ukraine and Russia. Our critic describes it as “both heartening and stupefying.”

Do: The coronavirus pandemic has profoundly disrupted some social circles. Here’s what experts and new pals have to say about making, and maintaining, pandemic friends.

We can help you fill up your free time with some cooking, culture or crafts. At Home has ideas on what to read, cook, watch, and do while staying safe at home.

Covering the pandemic, and living it

Our New Delhi reporter Suhasini Raj has been covering the pandemic on all fronts for the past year. And then it got personal, she writes in Times Insider.

The coronavirus seemed to be an all-consuming story. And then it swallowed up my entire life.

In August, my father, who’s diabetic, contracted the virus. I had to rush him in an ambulance to New Delhi, because there was a shortage of beds in the few good hospitals for coronavirus patients in his city, Lucknow. He barely made it through.

While working on stories about “virus trains” — emergency transport provided by the government that also ended up spreading the virus — I went to my hotel room and called my family back home. My husband said that his father was showing symptoms of Covid-19. So was my husband. And my son.

In the span of a week, a number of my family members, including my sister-in-law and niece, had tested positive for the virus. After I arrived home, I had to take my husband, son and mother-in-law to the hospital.

I felt engulfed — physically and emotionally — by uncertainties, and struggled to keep morbid thoughts aside. How long would it be before the steroids they were prescribed take effect? What if their cases went from being moderate to severe?

After my father-in-law was discharged, I breathed a sigh of relief. But that was short-lived. He became short of breath. Later, as he struggled with his oxygen mask and tubes, he had a fatal heart attack.

In a surreal way, reporting on the coronavirus tragedies of other families helped me cope with Covid in my own. I knew I wasn’t alone, and I was heartened by the strength I saw in others. And conversely, seeing those I love get infected and losing a dear family member gave me a depth of empathy for others.

P.S.
• We’re listening to “The Daily.” Our latest episode is about Aleksei Navalny and the future of Russia.
• Here’s our Mini Crossword, and a clue: Momentary lack of focus (five letters). You can find all our puzzles here.
• Our live coronavirus briefing has been ongoing for a year. It is believed to be the longest continuous coverage of the pandemic in the world.