We’re covering a crisis in India’s second coronavirus wave, and a stealth arms race building between the Koreas. 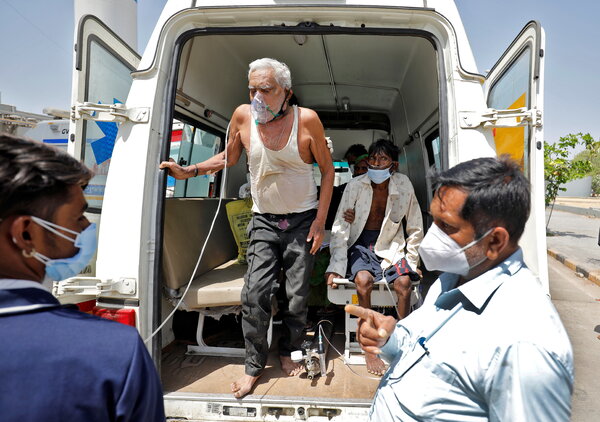 “Our health systems have reached its limit,” Delhi’s chief minister said. “We have almost no I.C.U. beds left. We are facing a huge shortage of oxygen.”

Several regions, including Maharashtra and parts of Uttar Pradesh, imposed lockdown-like restrictions. In the eastern state Jharkhand, the chief minister asked for permission to import more remdesivir, an experimental drug, for emergency use.

The shortages have resulted in squabbles between opposition-led state governments. And nonstop cremations across the country have been casting doubt on the official toll of the victims, Reuters reports.

Details: India reported more than 272,000 cases and 1,619 deaths on Monday, as a second wave of the coronavirus continued to spread. Prime Minister Boris Johnson of Britain canceled a planned trip to India next week.

Airports in Australia and New Zealand were filled with emotional scenes on Monday as thousands of passengers were allowed to travel freely between the two countries for the first time in more than a year.

Hong Kong said it would ban flights from India, Pakistan and the Philippines for two weeks after detecting its first local case involving a variant of the virus.

Argentina was already in a recession before the pandemic; now the inflation rate is above 40 percent and more than four in 10 Argentines are living in poverty.

Adults in all American states are now eligible for vaccines, and half have received at least one dose.

A quiet arms race has been heating up between North and South Korea, analysts say, and it’s threatening the delicate balance of peace between the two nations.

The impoverished North has used those moves to justify rapidly expanding its own arsenal, and it has threatened to tip its short-range missiles with nuclear warheads to make them harder to intercept.

Washington has tried to prevent missile proliferation in both countries for decades, but has recently eased restrictions on the South so that it could defend itself.

Details: This month, South Korea introduced the KF-21, a supersonic fighter jet developed at a cost of $7.8 billion, and revealed plans to acquire dozens of American combat helicopters. President Moon Jae-in has also increased South Korea’s annual military spending by an average of 7 percent, compared with the 4.1 percent average of his predecessor.

Navalny moved to a hospital

Russian authorities moved the imprisoned opposition leader Aleksei Navalny to a hospital on Monday for what was described as a vitamin treatment.

For three weeks, Mr. Navalny has been on hunger strike. His doctors have said he is experiencing a range of severe symptoms. The U.S. has warned of “consequences” should he die.

There was no immediate response from Mr. Navalny’s political allies or personal doctors about the recommendation for treatment with vitamins.

Details: Over the weekend, doctors said that Mr. Navalny’s blood tests showed a risk of imminent heart or kidney failure. But starvation is only one issue: Mr. Navalny’s lawyers say he may be sustaining the lingering effects of a near-fatal poisoning with a nerve agent over the summer.

Firefighters in Cape Town were battling a wildfire on Monday, most likely caused by an abandoned fire, that had engulfed the slopes of the city’s famed Table Mountain and destroyed parts of a university library.

Pakistan on Monday urged the Taliban to stay engaged in the Afghan peace process after the group said it would shun summits until foreign troops were gone.

France played a “significant” role in “enabling a foreseeable genocide,” according to a Rwandan government report, which accuses France of arming, advising and training the Hutu-led Rwandan government as it orchestrated the murder of some 800,000 Tutsi people.

Germany’s Greens party chose Annalena Baerbock as its candidate — the first time the Greens have a significant shot at the chancellery, as environmental issues come to the forefront for many voters.

The trial of the former police officer Derek Chauvin in the death of George Floyd is coming to an end. Here’s a refresher on what has happened at the trial.

So many people have fled to Syria’s crowded northwest that families have settled in important archaeological sites. “We, too, have become ruins,” one refugee said.

The many names of New York City

Some experts estimate that New York is home to close to 800 languages, the most linguistically diverse city in human history, and they are threaded throughout the city’s street names and neighborhoods: Manhattan’s Little Brazil, Brooklyn’s Little Haiti, Queens’s Calle Colombia and the Bronx’s Cinco de Mayo Way, which is a tribute to the city of Puebla, the hometown of many Mexican immigrants.

In a new book, “Names of New York,” the geographer Joshua Jelly-Schapiro tells the story of the city’s history through its streets and the names they carry. In some cases, residents — rather than city officials — invented the names: A Yemeni-born supervisor at Kennedy Airport petitioned Google Maps to mark several Bronx blocks as Little Yemen.

“If landscape is history made visible, the names we call its places are the words we use to forge maps of meaning in the city,” Jelly-Schapiro writes. You can read an excerpt in The New York Review of Books.

The flavors are bold and the prep is simple with vegetarian mushroom shawarma pitas.

Explore future worlds, get lost in a time loop, go to space: These science fiction movies are worth streaming now.

The pandemic has changed so much about our lives — including, in many cases, our bodies. And that’s OK. Here’s how to banish any anxiety about how you look after the past year.

P.S. Choire Sicha, who leads our Styles desk, is moving to a new role helping expand our newsletter portfolio.

The latest episode of “The Daily” is about the Iran nuclear deal.

Sanam Yar contributed reporting. You can reach Melina and the team at [email protected].