We’re covering a crescendo of violence between Israelis and Palestinians, and calls for a lockdown in India. 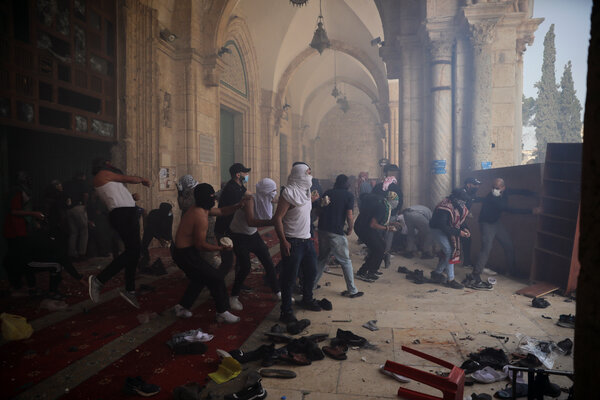 Violence grows between Palestinians and Israelis

On Monday morning, Israeli officers entered the Aqsa Mosque compound, one of Islam’s holiest sites, and fired rubber bullets and stun grenades at Palestinians, sending hundreds of people to the hospital by the afternoon. The crowds had been throwing stones at the officers.

Shortly after 6 p.m., militants in Gaza fired rockets toward Jerusalem, and the Israeli military responded with airstrikes. It was a sudden crescendo of violence in the region after months of relative calm, leaving residents of both Israel and Gaza expecting more violence.

Hamas claimed responsibility for the rockets, saying that it had acted in response to the police raid on the mosque compound. Unrest was expected on Monday, when far-right Israelis were scheduled to make a Jerusalem Day march through the Muslim Quarter of the Old City.

Context: Tensions were high amid the looming expulsions of Palestinian families from the neighborhood of Sheikh Jarrah in East Jerusalem, which the Israeli Supreme Court delayed on Sunday, in part to defuse tension. Palestinians have been protesting daily since April.

Calls for a lockdown in India grow

Amid a deepening crisis in India, growing numbers of medical experts are calling for nationwide restrictions and criticizing the government’s response.

The Indian Medical Association said it was time for a “complete, well-planned, pre-announced” lockdown to replace the scattershot regional restrictions currently in place across the nation of 1.4 billion, and that it was “astonished to see the extreme lethargy and inappropriate actions” of the health ministry.

Much of the criticism focused on the government’s decision to permit campaign rallies and crowded religious festivals, as well as a failure to use early successes to prepare for possible later surges.

Numbers: The official figures are staggering — more than 350,000 new infections daily this month and nearly 250,000 total deaths — but some experts say that the numbers are a vast undercount and estimate that India is on pace to suffer more than one million deaths by August.

Experts now say the world will have to live with the virus, as it is changing too quickly, vaccinations are happening too slowly and variants are spreading too easily to reach global herd immunity.

China said on Sunday that it would partition Mount Everest’s summit to prevent coronavirus cases from entering the country.

Saudi Arabia said on Sunday that it would hold the hajj, the annual pilgrimage to Mecca, but did not say how many pilgrims would be allowed to come.

Chinese authorities are forcing women in the Xinjiang region to get IUDs or get sterilized as they tighten their grip on Muslim ethnic minorities, our reporters found.

And when the women recuperated at home, government officials were sent to live with them to watch for signs of discontent. If they had too many children or refused contraceptive procedures, the women faced steep fines or detention in an internment camp.

It is an expansion of the Communist Party’s repressive campaign. They have put hundreds of thousands into internment camps and prisons, sent residents to work in factories and sent children to boarding schools. But this step goes further, attempting to change the makeup of the country’s population for generations.

Birthrates in the region have already plunged as the use of invasive birth control procedures has risen, findings that were previously documented by The Associated Press.

Response: Beijing has denied the repressive measures. But our interviews with more than a dozen people from Xinjiang as well as a review of official statistics, government notices and reports in the state-run media depict a coercion effort. Many who were sent to the camps described abuse and being forced to take drugs that stopped their menstrual cycles.

Quotable: Qelbinur Sedik, an ethnic Uzbek who taught Chinese to Uyghur students, fled China for the Netherlands in 2019 after deciding to be sterilized. “The government had become so strict, and I could no longer take the IUD,” she said. “I lost all hope in myself.”

Sun Moon Lake was once a popular tourist spot in Taiwan. Now its parched bottom is Instagram-famous for a grim reason: one of the worst droughts to hit the island in decades.

Three leopards escaped from China’s Hangzhou Safari Park, but the zoo did not admit it for weeks. One farmer wondered if the creature in his tea bushes was an oversize feline.

An Australian company’s effort to scrap a U.S. trademark on the word “Ugg” — a generic term in Australia, a major brand in the U.S. — suffered a blow after an American appeals court rejected its argument.

In the sparsely populated Russian republic of Kalmykia, where the descendants of some of the last nomads of Europe live, the landscape has become increasingly desertlike after droughts and unrelenting winds destroyed the once productive land. Climate change is exacerbating the situation. “Nature is forcing us to leave,” one farmer said. For our travel section, we visit the Kalmyk steppe.

Bread baking changed in 2006. That’s when Jim Lahey and Mark Bittman published their fresh take on the form in The Times: a recipe that lets time do most of the work, no kneading necessary.

The technique led to an explosion in amateur baking and changed professional baking as well, the chef J. Kenji López-Alt writes. It changed his life, too. “Learning how time can do the work for you turned me from someone who baked perhaps one or two loaves a year into someone who throws together dough on a whim before bedtime several times a month,” he writes.

López-Alt’s basic instructions: Mix flour, water, salt and yeast in a bowl just until they all come together. Cover the bowl and let it sit on your counter overnight. The next day, shape it into a loose loaf, let it proof, then bake it in a preheated Dutch oven with the lid on.

What to Listen To

Chloe Moriondo and girl in red, both maestros of growing pains, are releasing new albums that showcase frank emotions and ambitious productions.

In “Project Hail Mary” by Andy Weir, a former science teacher is the planet’s only hope to save it from a cloud of alien microbes.

Here’s today’s Mini Crossword, and a clue: Animals that don’t drink water, but rather absorb it through their skin (five letters).

The latest episode of “The Daily” is about vaccine hesitant people in rural Tennessee.

Claire Moses wrote the Arts & Ideas. You can reach Melina and the team at [email protected].