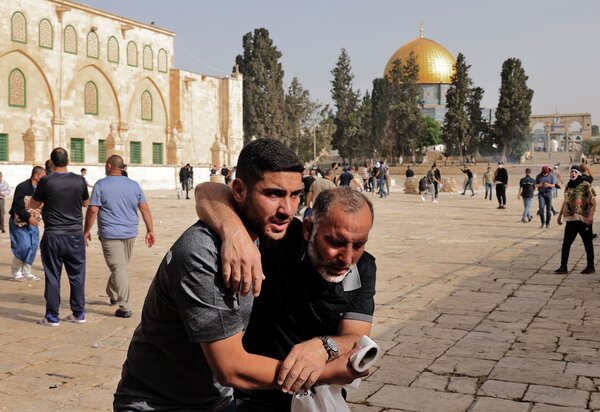 Weeks of clashes in Jerusalem veered into military conflict yesterday after a raid by the Israeli police on Al Aqsa Mosque. Militants in Gaza responded by firing rockets at the city, drawing Israeli airstrikes in return. Palestinian health officials said at least 20 residents of northern Gaza, including nine children, were killed in the airstrikes.

The violence began after the police entered the mosque compound and fired rubber-tipped bullets and stun grenades at stone-throwing Palestinians. More than 330 Palestinians and at least 21 Israeli police officers were injured, according to local officials.

Tensions were already high amid the looming expulsions of Palestinian families from the neighborhood of Sheikh Jarrah in East Jerusalem. The Israeli Supreme Court delayed the expulsions on Sunday, in part because of the tensions the case has stirred. Palestinians have been protesting daily since April.

Explainer: The Aqsa Mosque sits on a site sacred to Christians, Muslims and Jews, and it is a chronic flash point in the protracted Israeli-Palestinian conflict. Here’s what you need to know.

The world may need to learn to live with the coronavirus

Early in the pandemic, some experts hoped that the world would one day reach a point when the coronavirus would lack enough hosts to spread easily. But between the variants seeping through borders and the plodding pace of vaccination, such a world seems increasingly out of reach.

Instead, if the virus continues to run rampant, it will be well on its way to becoming endemic. And though future outbreaks won’t be on the scale of those now devastating India and Brazil, a constant threat should be expected, according to Dr. David Heymann, an epidemiologist at the London School of Hygiene and Tropical Medicine.

But there is a glimmer of hope: Though new daily cases remain very high around the world, the number of deaths is falling. If that trend line continues, the virus could become a less lethal threat, perhaps resembling the coldlike disease seen in younger children that could be managed with vaccines that are updated periodically to protect against variants.

In England, hugging friends and family members will be officially government-approved, starting Monday.

The W.H.O. announced that it had designated the B.1.617 variant first found in India as a variant of concern.

The Food and Drug Administration authorized use of the Pfizer-BioNTech vaccine for 12- to 15-year-olds in the U.S.

Saudi Arabia said on Sunday that it would hold the hajj, the annual pilgrimage to Mecca, but did not say how many pilgrims would be allowed to come.

Chinese authorities are forcing women in the Xinjiang region to get IUDs or be sterilized as they tighten their grip on Muslim ethnic minorities and try to orchestrate a demographic shift that will diminish their population over generations.

Birthrates in the region have already plunged in recent years as the use of invasive birth control procedures has risen, part of a vast and repressive social re-engineering campaign by the Communist Party.

Over the past few years, the party has moved aggressively to subdue Uyghurs and other Central Asian minorities in Xinjiang, putting hundreds of thousands into internment camps and prisons. The authorities have placed the region under tight surveillance, sent residents to work in factories and placed children in boarding schools.

Response: Beijing has denied using the repressive measures. But interviews with more than a dozen people from Xinjiang, as well as a review of official statistics, government notices and reports in the state-run news media, depict a coercion effort. Some former detainees described being abused at internment camps and being forced to take drugs that stopped their menstrual cycles.

More than 100 Roman Catholic parishes in Germany held services to bless gay couples, in defiance of the Vatican’s refusal to recognize same-sex unions.

Britain’s already divided Labour Party is in turmoil after a disappointing performance in local elections, raising doubts about whether it has a credible path back to power.

Sun Moon Lake, above, was once a popular tourist spot in Taiwan. Now its parched bed is Instagram-famous for a grim reason: one of the worst droughts to hit the island in decades.

NBC said it would not air the Golden Globes next year, after several major studios criticized the show’s organizer for its lack of diversity.

An Australian company’s effort to scrap the U.S. trademark on the word “Ugg,” as in the maligned yet beloved sheepskin boots, suffered a blow after an American appeals court rejected its argument.

Critics called the postmodern buildings of the architect Helmut Jahn, who has died at 81, “dazzling,” “convention-busting” and “unrelated to anything else in the whole of Western civilization.”

Most New Yorkers — or anyone who has spent even a little time in the city — recall the morning commute with little sentimentality: cattle-car crowded, with strangers pressed so closely against you that you could deduce their last meal.

Post-pandemic, that unimaginable level of forced intimacy now seems curiously nostalgic, writes my colleague Dan Barry: “I miss the normal — however abnormal that normal had been.”

Bread baking changed in 2006. That’s when Jim Lahey and Mark Bittman published their fresh take on the form in The Times in a recipe that draws on traditional techniques. Time does most of the work, no kneading necessary.

The recipe, and its imitators, led to an explosion in amateur baking, and it also changed professional baking, the chef J. Kenji López-Alt writes. And it changed his life, too. “Learning how time can do the work for you turned me from someone who baked perhaps one or two loaves a year into someone who throws together dough on a whim before bedtime several times a month,” he writes.

The basic instructions: Mix flour, water, salt and yeast in a bowl just until they all come together. Cover the bowl and let it sit on your counter overnight. The next day, shape it into a loose loaf, let it proof, then bake it in a preheated Dutch oven with the lid on.

D.I.Y.: Here’s López-Alt’s updated recipe for no-knead bread. And, if you’d like to take it up a notch, his low-knead alternative.

This French icebox cake — layers of cookies held together with frosting — is a delicious, uncomplicated dessert.

A new generation of South African directors and producers is making hits about modern life and love for global audiences.

See the Russian republic of Kalmykia, where encroaching desert has transformed the landscape.

That’s it for today’s briefing. See you next time. — Natasha

The latest episode of “The Daily” is about vaccine-hesitant people in rural Tennessee.

Claire Moses contributed to today’s Arts and Ideas. You can reach Natasha and the team at [email protected].