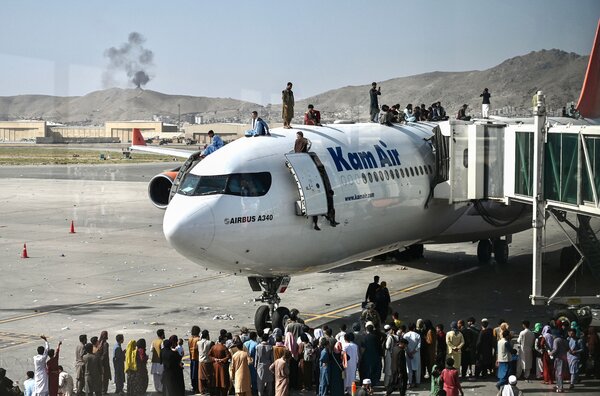 In an address from the White House, President Biden insisted that the U.S. mission in Afghanistan “was never supposed to have been about nation-building,” and said that there was no easy time to withdraw, even as he acknowledged that the retreat had been “hard and messy.”

“When I came into office, I inherited a deal that President Trump negotiated with the Taliban,” said Biden. “The choice I had to make as your president was either to follow through on that agreement or be prepared to go back to fighting the Taliban in the middle of the spring fighting season.” He added, “I stand squarely behind my decision.”

His unapologetic defense rallied some Democrats to his side, but the president still faces angry and increasingly public criticism from lawmakers in both parties over the chaos in Kabul. Separately, critics have blamed Afghanistan’s former president, Ashraf Ghani, for the pandemonium in Kabul, saying he has betrayed his people.

On the ground: Thousands of desperate Afghans trying to escape the Taliban takeover swarmed the airport in Kabul yesterday, mobbing the runways and even trying to cling to the fuselage of departing American military planes. Our Visual Investigations team analyzed how the government’s fall occurred.

Veterans’ response: Those who served in Afghanistan watched its collapse from the U.S. with anguish and rage. “I just can’t help thinking about what a waste it is,” one veteran said. “I can’t allow myself to think about how after all that blood and treasure, it ends like this.”

The Interpreter: How might the Taliban govern? While no two cases of insurgent rule are the same, certain patterns have repeated throughout modern history.

Civil defense officials in Haiti raised the death toll from Saturday’s 7.2-magnitude earthquake to more than 1,400 and said nearly 7,000 people had been injured.

Many churches lay in ruins from the quake. For numerous Haitians, their only source of aid throughout their lives, in the absence of strong government institutions, has been the church, a part of Haiti’s landscape since the era of European colonialism and slavery.

In the city of Les Cayes, which was particularly devastated by the quake, clerics despaired even as they sought to project hope and resolve to rebuild. “We are the only thing here,” said the Rev. Yves Joel Jacqueline, who works at the city’s cathedral. “There is no support from the government.”

Context: The disaster could not have come at a worse time for Haiti. The Caribbean nation is still traumatized over the unsolved July 7 assassination of President Jovenel Moïse, and it is still recovering from the calamitous quake that destroyed much of the Port-au-Prince area in 2010.

Tropical Depression Grace: The storm made landfall in Haiti yesterday afternoon, bringing the potential for mudslides and flooding that could hamper recovery efforts.

As the Delta variant of the coronavirus rages around the world, a heated debate has arisen over whether public health officials should recommend booster shots.

Some nations, including France, Germany and Israel, have authorized Covid-19 booster shots for older people. The Biden administration is developing a plan that would roll out booster shots to immuno-compromised people as early as the fall, saying the logistics are too complicated to wait for scientific certainty that the extra doses are really needed.

In the U.S., the surge of cases caused by the Delta variant has forced Americans to recalibrate. Governors and mayors who imposed shutdowns over the summer are now pushing people to get vaccines. More than twice as many new virus cases are being reported nationally compared with last August.

Response: Officials from the W.H.O. argue that booster programs will further deprive lower-income countries of vaccines, giving the virus latitude to mutate into potentially more transmissible or virulent variants.

In other virus news:

South Africa is still waiting to receive most of the 31 million vaccine doses it ordered from Johnson & Johnson, while the company has been exporting millions of doses, bottled and packaged there, for distribution in Europe.

The deaths of two brothers in Kenya have set off a fresh national reckoning over police brutality, particularly in enforcing Covid rules, as a fourth wave of the pandemic hits the country.

Babies and toddlers spread the virus in homes more easily than teens do, a study found.

Tesla’s automatic driving system is under official scrutiny after a series of crashes. The National Highway Traffic Safety Administration cited growing concerns that the Autopilot feature can fail to see parked emergency vehicles.

The New York State Assembly said it would continue its investigation of Gov. Andrew Cuomo, a reversal from the announcement last week that the legislature would no longer move to impeach him.

Wildfires in the western U.S. continue to spread, forcing several thousand residents to flee their homes in recent days. At least six large blazes are burning in Northern California, and the U.S. Forest Service has deployed about 21,000 federal firefighters.

Using data from the Cassini mission that ended in 2017, scientists are now closer to understanding one of Saturn’s most puzzling features: its core.

An empty building in a Paris business district has become a hub for young dancers to practice and record their routines for social media.

The classic British summer holiday to Europe has been replaced by a trip to the shores of England, where business is good but owners struggle with worker shortages and Covid-19 restrictions.

Enver Hoxha was once Europe’s most enduring and feared communist tyrant, leaving his native Albania awash with statues and portraits in his honor. Now, just one tribute remains, watched over day and night by Sabire Plaku, 80, and her daughter.

“In his time, he was a good man, but nobody wants him anymore,” Plaku said. “I have protected him with all my strength.”

A new must-have for TV and movie shoots

Working on sets can be challenging. Some TV and movie companies are hiring therapists to help, Alex Marshall reports.

Some projects bring in therapists before filming to help writers work with dark material. Other times, therapists are available to members of the cast and the crew once filming begins.

When Amazon’s series “The Underground Railroad,” about people escaping slavery, was filming in Georgia, a therapist, Kim Whyte, was on the set. “Some of the cast and crew were disturbed by the content — just the institution of slavery,” Whyte said. Others wanted to talk about issues at home.

It’s part of an effort to make film productions healthier workplaces. “You’re pushed, pushed, pushed and pushed to the limit, all the time,” Sue Quinn, a location manager, told The New York Times. The priority is often to make sure projects remain on budget, she said, and crew members and actors are often bullied or asked to work exhausting hours.

Joy Gharoro-Akpojotor, a writer and producer, said she first worked with a therapist while writing a short film about her experience of seeking asylum in Britain. She then decided to make the therapist available to members of the cast and the crew on several other productions.

“It should be part of how we all work,” Gharoro-Akpojotor said. “We don’t know what anyone’s working through.”

This tuna poke, topped with roasted macadamia nuts and furikake, makes for about the most delicious eating in the world.

“I Live a Life Like Yours” is a thoughtful memoir by a Norwegian professor on the challenges of living with disability.

Patagonia’s snow-capped mountains and windswept lakes are often depicted in summertime. See the landscape in autumn.

The latest episode of “The Daily” is about the fall of Afghanistan.

Sanam Yar wrote today's Arts and Ideas. You can reach Natasha and the team at [email protected].