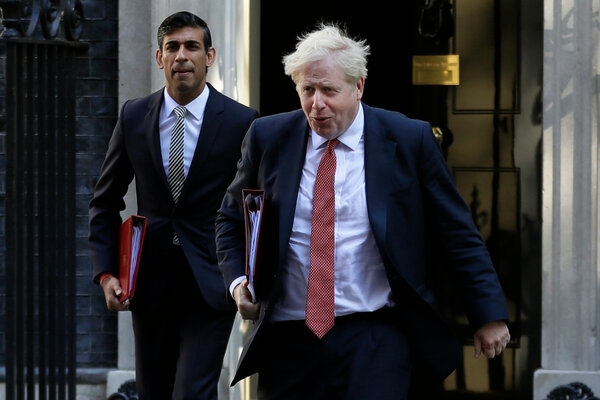 Britain’s Boris Johnson is widely expected to break his vow not to increase taxes today when he announces a plan to bolster the nation’s social care services, a longtime goal that he first unveiled soon after becoming prime minister in 2019.

Even before the announcement, Johnson has received blistering dissent from members of his own Conservative Party. No fewer than three former Conservative chancellors of the Exchequer have joined the chorus of criticism.

The discord signals a new phase for the government as it seeks to move away from pandemic crisis management and back toward a difficult domestic agenda, including its pledge to distribute wealth to more deprived parts of the country.

Context: Britain’s creaking National Health Service, which was already strained before the pandemic, now has an immense backlog of routine treatment and operations that had to be postponed. The government yesterday announced a cash injection of £5.4 billion, or $7.4 billion, to help deal with that issue.

What’s next: Johnson’s proposals are likely to cap the amount any British citizen pays for social care over their lifetime. The government is expected to increase a tax known as National Insurance. The burden falls on workers on payrolls and, therefore, disproportionally on the working poor and the young.

A Belarusian court yesterday sentenced Maria Kolesnikova to 11 years in prison after a closed-door trial in Minsk, the capital.

Kolesnikova tried to run for president last year. She and her colleague, Maksim Znak, another opposition figure and a lawyer, were charged with extremism, conspiring to seize power illegally and damaging state security. Znak received a 10-year sentence in a maximum security penal colony.

It was another sign that President Aleksandr Lukashenko was pursuing an unrelenting crackdown on dissent after an election widely condemned by many Western governments as a sham. An estimated tens of thousands of opposition supporters have fled Belarus since the crackdown began last year.

Context: Kolesnikova became one of Belarus’s most prominent opposition leaders after the candidate whose campaign she managed was arrested and barred from running. Kolesnikova aligned herself with Svetlana Tikhanovskaya and Veronika Tsepkalo, two others taking on the president. The three women held pre-election rallies that drew tens of thousands of supporters.

In the nearly 18 months since the pandemic first forced companies to send their employees to work from home, the date that U.S. companies had planned to bring workers back to offices has changed again and again: First it was January 2021, then July, then September.

Now September is out as an option for many companies. Google, Amazon, Apple and Starbucks have said they will postpone their return until next year, with executives seeking an end to the roller coaster of anticipated return dates and further delays.

Companies have new variables to consider, including differing infection rates across the country and mask mandates. In a recent survey of nearly 1,000 companies, 52 percent of respondents said they planned to have vaccine mandates by the end of the year, compared with 21 percent that said they already had vaccine requirements.

Related: Synagogues, which plan their celebrations of the High Holy Days months in advance, have also dialed back plans for return. Manhattan’s Central Synagogue, for example, rented Radio City Music Hall — and will proceed with services, but at 30 percent capacity, with masks and proof of vaccination.

Oregon and Idaho are running out of I.C.U. beds as Covid cases hit record highs.

Federal pandemic unemployment benefits in the U.S. expired yesterday. More than 7 million people will be cut off from the assistance.

New Zealand announced yesterday that it would ease Covid-19 restrictions outside its largest city, Auckland, which will remain at the strict Level 4.

The Taliban said they had captured the Panjshir Valley, raising their flag over Bazarak, the last Afghan provincial capital not under their control, even as representatives of the opposition forces there maintained that they would fight on from the mountains. Above, the spokesman for the Taliban.

A U.S. Supreme Court order effectively reviving a Trump-era policy requiring asylum seekers to wait in Mexico was quietly greeted with relief among some Biden administration officials after an uptick in people heading toward the southwestern border.

Jacob Zuma, the former South African president, has been released on medical parole roughly two months after he was imprisoned on contempt charges. The opposition leader criticized the move.

Tens of thousands of Americans across the political divide are stepping forward to help Afghans who aided the U.S. war effort.

The Palestinian Authority charged 14 members of its security forces in the fatal beating of an outspoken activist.

Congressional committees will meet this week to begin formally drafting Democrats’ plan for a $3.5 trillion transformation of the American social safety net.

Our Projectionist columnist looks at the early highlights from the Venice Film Festival, which include an adaptation of Elena Ferrante’s “Lost Daughter.”

The European Fine Art Fair is once again being held online, with a strict limit of three items per dealer.

A special edition of the Milan Furniture Fair turns pandemic constraints into a chance for innovation.

New York City has reopened, in a banquet of sights, smells, flavors, textures and sounds. The Times asked photographers to capture the city as it returns to its senses.

Michael K. Williams, best known for his role as Omar Little in “The Wire” — a sawed-off-shotgun-wielding stickup man — has died at 54. Tributes poured in for the actor.

A modern backlash against a 19th-century coach

Built in 1896, the “Golden Coach” was intended as a gift from the city of Amsterdam to Queen Wilhelmina: a gilded carriage, designed to represent the Dutch empire, with leather from Brabant, cushions filled with flax from Zeeland and teak from the Dutch colony of Java.

These components glorifying the empire would have been appreciated by most Dutch people in that era, reports Nina Siegal. But they are what now makes the carriage, on display at the Amsterdam Museum, such a painful reminder of slavery and colonial repression.

The coach has become a focus of anti-colonialist and antifascist protest, in an echo of similar debates in the U.S. over Confederate statues and other monuments, and in Europe over monuments honoring colonialists and slave traders. What will happen to it next has become a matter of intense public debate.

Read more about the Golden Coach.

The short stories in Venita Blackburn’s “How to Wrestle a Girl” follow characters in lust, in grief, in fear and online.

It’s Drake versus Kanye West: Both rappers have released their anticipated albums within five days of each other.

That’s it for today’s briefing. Thanks for joining us. — Whet and Natasha

P.S. Beena Raghavendran, an expert in community engagement journalism, will be joining The Times’s Newsroom Development and Support team.

The latest episode of “The Daily” is about the new abortion law in Texas.

You can reach Natasha, Whet and the team at [email protected].