What’s behind the E.U.-China investment agreement.

We’re covering what to expect from a major E.U.-China deal, new data showing a much higher coronavirus death toll in Russia and how Spain’s co-op grocery stores are offering workers protection during economic turmoil. 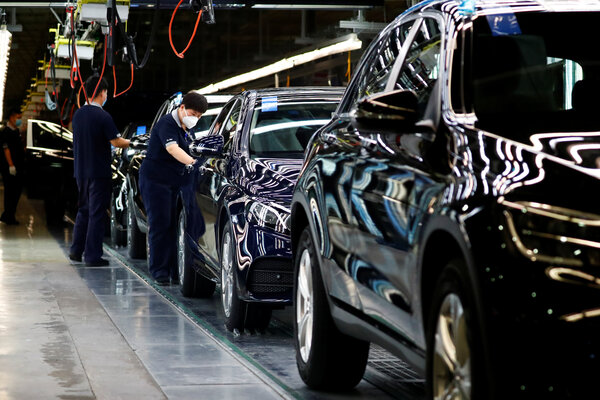 China and the E.U. are close to a landmark deal

Beijing and Brussels are on the brink of an agreement to roll back restrictions on investment — a deal that has been seven years in the making. An announcement is expected this week.

The pact has been a top priority of Chancellor Angela Merkel of Germany because it would give companies like Daimler and Volkswagen better control over their operations in China. But it faces opposition in Europe, and the incoming U.S. administration under Joe Biden has reservations. I spoke with Jack Ewing, who has been reporting on the deal from Germany, about what it means.

What is the gist of the deal, and what are its goals?

The problem with investing in China has always been that you had to share technology, you had to operate through joint ventures with Chinese partners. There were a lot of rules. The Chinese government could sometimes tell you where to put your factories. This treaty lifts those restrictions and gives European companies the same freedom Chinese companies get in Europe.

Why is the deal coming together now?

One of the big reasons is that Angela Merkel was the president of the E.U. the last six months. This was one of her signature projects. She wanted to get it done while Germany still held the rotating presidency, so there was an element of national prestige.

The bigger thing is that they’ve been working on this for seven years, and really only a week ago, China gave some ground on labor rights. The other thing is that Europeans learned under the Trump presidency that they needed to be more independent: They couldn’t rely on the United States the way they had in the past. I think they came to enjoy having more sovereignty and being a little more assertive overseas.

Critics in the E.U. argue that the deal takes away leverage needed to pressure China on human rights and other issues. Could you elaborate on that?

I think the debate over the next couple days will be whether the agreement goes far enough to push China to end its labor abuses, its use of forced labor in some of the minority regions. The other element is that the U.S. and the E.U. together would have more leverage against China than either one of them alone.

After months of questions over the true scale of the coronavirus crisis in Russia, the state statistical agency reported over 200,000 deaths linked to Covid-19 — more than three times as high as officially reported.

This is still far lower than the U.S. toll, but it does mean that Russia has suffered more fatalities than European countries like Italy, France and Britain, whose poor records have been regularly cited by Russian state media as proof of Russia’s relative triumph.

The gap between the official death rate and the real one is largely explained by Russia’s practice of recording a death as coronavirus-related only in cases where an autopsy has confirmed the virus as the main cause.

Context: The latest figures come as the public remains skeptical about Russia’s vaccine, hailed by President Vladimir Putin. Only 38 percent say they plan to get vaccinated.

Nearly half of England is under the strictest lockdown measures, but the country is still shattering virus records. There were 53,135 new cases reported on Tuesday, the highest figure yet on a single day. More than 20,000 people are hospitalized, more than at the peak of the pandemic in April.

The pandemic has caused the highest number of excess deaths in the Netherlands since World War II, the country’s national statistics bureau said on Tuesday.

Dozens of research papers published over the past few months have found that people who carried a bigger load of the coronavirus became seriously ill more often and were more likely to die, compared with those who carried much less virus.

If you have 20 minutes, this is worth it

The far-right soldier disguised as a refugee

At the height of Europe’s migrant crisis, Franco A., a lieutenant in the German Army, posed as a Syrian refugee, darkening his face and hands with his mother’s makeup and applying shoe polish to his beard. The ruse, according to prosecutors, was part of a far-right plot to carry out one or several assassinations and set off civil unrest.

Franco, above, is facing trial on terrorism charges in Germany. Our reporter conducted a series of interviews with him and looked at how his case was “the tale of today’s two Germanys,” where examples of extremism in the military and police have increased.

Argentina: A bill before the Senate would make abortion legal in the predominantly Catholic nation and homeland of Pope Francis. Its approval in Latin America’s largest country would reverberate widely in the region.

Boeing: The troubled 737 Max plane returned to the skies over the United States for the first time in almost two years. The families of those killed aboard two fatal flights argue that the Max is still unfit to fly.

Pierre Cardin: The visionary designer, who invented the business of fashion as it is conducted today, has died in France. He was 98.

Croatia quake: At least six people were reported killed and dozens injured when a powerful 6.4-magnitude earthquake struck near Zagreb on Tuesday. It was the second quake in the area in 24 hours, and tremors were reported across the Balkans.

Snapshot: Above, workers at a cooperative in Spain’s Basque region. Mondragón’s co-ops employ more than 70,000 people in Spain, and they are attracting attention as an alternative to companies that focus on shareholders. Mondragón expects to be profitable despite the downturn this year.

What we’re reading: This Rest of World article on India’s booming dark data economy. It brings issues of data privacy into sharp and alarming focus.

Cook: This chicken La Tulipe is a Times classic. The morels and Cognac are wildly sophisticated additions to what otherwise might be a plain roasted chicken.

Read: Here’s a sneak preview of books coming out in 2021 from around the world. Watch for “First Person Singular,” from Haruki Murakami and “Arriving in a Thick Fog,” from the Korean writer Jung Young Moon.

Do: Prepare for a mellower new year. Our Well editors have advice on steps to soothe anxiety and stress.

With 2021 just around the corner, this may be a time to try something new. At Home has our full collection of ideas on what to read, cook, watch, and do while staying safe at home.

A Covid history in a journalist’s notes

In March, Jorge Arangure Jr., a Metro desk editor, began logging daily plans and ideas for covering the pandemic in New York. He recently pulled out his notebook and read through those pages with a mix of pride and pain. Here’s what he wrote.

The work during that time was relentless, and by the end of each week I would feel emotionally and physically sapped. For the Metro staff, we were not only covering the epicenter, but we were also living in it.

On some days, the grim stories made me weep. But the staff powered on because we knew the coverage was important.

“Patients get ill very quickly. Few hours later they decide to intubate,” I wrote on March 26, referring to medical workers. Later, I added “China/Italy,” suggesting New York City was facing the same dire situation we had seen weeks earlier in those countries.

Tracking the daily list of articles became one of the notebook’s important functions. “Slugs” are the names we give to articles. At one point, we decided that all of our articles about the virus needed to carry the tag “NYVIRUS” to distinguish them from the countless other virus articles in The Times. “NYVIRUS-TESTING,” “NYVIRUS-NURSES” and “NYVIRUS-HOSPITAL” became popular slugs, and we reused them as necessary on different days. Sadly, “NYVIRUS-DEATH” was frequently used, too.

I have since gone through another notebook while covering the pandemic, and began a third one in September.

Recently, I have been frequently writing NYVIRUS-VACCINE on my daily list of articles. I hope we see much more of this in the weeks ahead.

P.S.
• We’re listening to “The Daily.” Our latest episode is about mourning.
• Here’s our Mini Crossword, and a clue: Central Perk on “Friends,” e.g. (four letters). You can find all our puzzles here.
• An accidental poem in our newsletter The Morning made an appearance on the @nythaikus Twitter account: “Subscriber support / helped make Times journalism / possible this year.”

Prince Harry 'desperate' to see The Queen claims Nicholl When you subscribe we will use the information you provide to send you these newsletters. Sometimes…

Prince Philip’s funeral guest list announced by Royal Family When you subscribe we will use the information you provide to send you these newsletters. Sometimes…