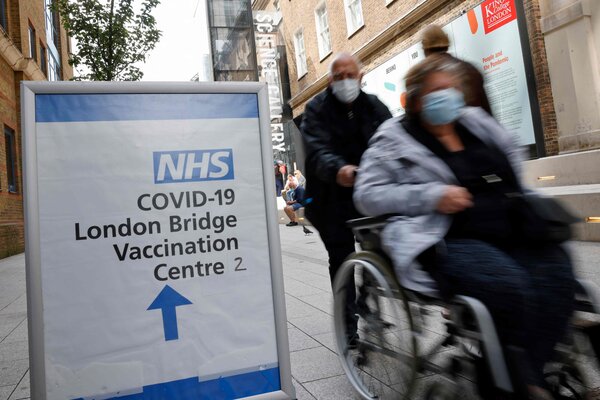 As his popularity wanes, this time after a broken promise not to raise taxes, Boris Johnson has announced a vaccine campaign to offer booster shots to people 50 and older, as well as first shots to three million children, ages 12 to 15 — all while reiterating his vow to avoid future lockdowns.

Should winter bring a surge of new coronavirus cases, however, the British prime minister could reintroduce mandatory mask-wearing, roll out vaccine passports and urge workers to stay home if possible, under what the government calls its “Plan B.”

While surveys generally show that the British public favors strict measures to contain the virus, lockdown restrictions are anathema to a noisy libertarian wing of Johnson’s own Conservative Party. Britain is still reporting more than 25,000 cases of the virus a day, and hospital admissions are running roughly 1,000 a day, straining the country’s health system.

Analysis: For the first time in months, poll ratings are slipping for the governing Conservative Party. There are growing doubts about Johnson’s pledge to “level up” economically disadvantaged areas, while some of the new voters he attracted in the 2019 election may be drifting away.

One in four U.S. hospitals is reporting that over 95 percent of its I.C.U. beds are occupied. The crisis is most acute in the South.

Unwilling to wait for the federal government to approve Covid booster shots, some Americans are seeking them now.

Cuba, which developed its own Covid vaccines, will become the first country to offer vaccines to 2-year-olds. China and the U.A.E. are vaccinating children as young as 3.

Vladimir Putin, the Russian president, is isolating after several members of his inner circle tested positive for the coronavirus.

In just four years, CNews has become France’s No. 1 news network. Following in the model of Fox News, the network claims it tells viewers what the “woke” mainstream news media won’t, focusing on opinion and giving a platform to far-right politicians, opponents of fighting climate change and individuals who have spread misinformation about Covid-19.

CNews increasingly shapes the national debate, especially on issues like crime and immigration that are expected to sway France’s presidential election next year. Its most popular personality, Éric Zemmour, has been forced off the air by the country’s broadcast regulator because he is regarded as a likely candidate for president — and one with a real chance of upending the race.

In two rulings on comments by Zemmour, the regulator put CNews on formal notice, and in March fined it for inciting racial hatred — the first time a news network has faced such a sanction. Since June, CNews has twice been warned for failing to provide a diversity of views or for giving disproportionate airtime to the far-right National Rally.

Origin story: CNews emerged at a time of particular discontent — in the aftermath of the “Yellow Vest” protests of 2018. “People were sick and tired of the politically correct,” said Serge Nedjar, the network’s head. “News was in the hands of newspapers, television and dailies that all said the same thing.”

The looming threat of Al Qaeda

Al Qaeda could rebuild in Afghanistan within one to two years, U.S. intelligence officials said. The new timeline is not a drastic shift from earlier projections, but it reflects the reality that the Taliban have a limited ability to control the borders.

While the Taliban have long fought the Islamic State affiliate, they are established allies of Al Qaeda. Though the Taliban pledged in the February 2020 peace agreement with the United States not to let Afghanistan be used by terrorist groups, analysts have said such promises ring hollow.

“The current assessment probably conservatively is one to two years for Al Qaeda to build some capability to at least threaten the homeland,” Scott Berrier, the director of the Defense Intelligence Agency, said yesterday at the annual Intelligence and National Security Summit.

Alyona Popova is campaigning for a seat in Russia’s lower Parliament and imploring women to turn against Vladimir Putin’s governing party. Domestic violence is at the center of her platform.

Haiti’s chief prosecutor said there was evidence linking the acting prime minister, Ariel Henry, to the assassination in July of Jovenel Moïse, the former president. It comes amid an escalating power struggle in Haiti.

Myanmar’s army, known as the Tatmadaw, is ramping up attacks on a largely improvised armed resistance. Thousands of people have been pushed into the forests, some of which are rife with poisonous snakes, malaria and dengue.

Donald Trump’s top military adviser called Chinese officials in the last months of the administration to assure them the U.S. would not attack China, a new book reports.

President Biden will nominate Alvaro Bedoya, a privacy expert and critic of Big Tech, to the Federal Trade Commission.

This theme of Monday’s Met Gala was American Independence. Patriotism, pop culture and politics were in fashion, but, our critic asks, to what end? Take a look at the night’s best outfits.

Norm Macdonald, the acerbic comedian who anchored “Weekend Update” on “Saturday Night Live” in the 1990s, died of cancer. He was 61.

On a four-day visit to Slovakia and Hungary, Pope Francis had strong words for those who wield Christian symbols for personal or political gain.

It’s never too late to follow your spiritual calling.

After coming out as a transgender woman, Vica Steel, a married elementary schoolteacher who lives in Madison, Wis., abandoned her dream of church leadership. Until now.

The future of movies

Taking a look at the new season in the new abnormal, our chief film critics Manohla Dargis and A.O. Scott ask: Are we on the cusp of a new era, or will this too pass? Read their full conversation here.

A.O. SCOTT: Judged solely from the slate of upcoming releases (some held back from 2020), that future looks a lot like the recent past. Cinema as we have known it seems to still exist.

At the same time — though not for the first time — it is widely feared to be in mortal peril. Some of that anxiety is Covid-specific. Nobody knows when or how this thing will end, and whether audiences will return to theaters in sufficient numbers to revive the old business models.

MANOHLA DARGIS: That we’re social animals is what made me think that we’d get back into theaters, that and there’s too much money at stake. Moviegoing has been up and down forever.

But the habit of on-demand, whenever, wherever watching has proved overwhelming, which is bad for exhibition but good for the multinational companies that own the studios because they also own the companies which funnel stuff into homes. I am far more worried about nonindustrial cinema and if its audience will return to theaters.

SCOTT: What you and I and others in our rapidly aging demographic understood by “going to the movies” may have been replaced by a different menu of choices and practices. Kids nowadays haven’t developed it in quite the same way. They have more screens, more options and different reasons for buying a ticket.

DARGIS: Movies, unlike branded entertainment, need to live in the world, not just on personal devices. This isn’t about the putative romance of moviegoing, but how people experience art and culture, because while we’re talking about infrastructure, we are also talking about pleasure — the pleasure of the cinematic object, and the pleasure of your company and conversation.

The Booker Prize announced its six finalists for one of the world’s most prestigious literary awards. Check out this year’s shortlist.

That’s it for today’s briefing. My colleague Whet will be writing tomorrow’s briefing, but I’ll see you on Friday. — Natasha

P.S. The New York Times for Kids is beta-testing an app.

The latest episode of “The Daily” is about a Times investigation into nursing homes.

Scientists are investigating a new sub-strain of the Omicron variant that may be more transmissible. A sister variant of the usual BA.1 type of Omicron…