We’re covering the gulf between wealthy and poorer nations for access to a coronavirus vaccine, new laws against civil liberties in Hungary and Brazil’s chaotic vaccine plan. 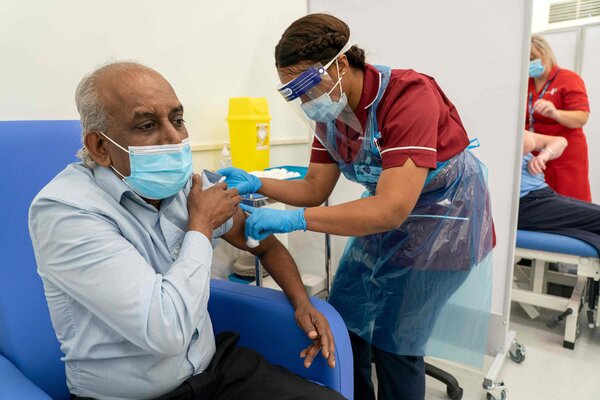 Rich countries are first in line for new virus vaccines

The world’s wealthiest countries have laid claim to more than half of the doses of coronavirus vaccines coming on the market through 2021, as many poorer nations struggle to secure enough. If all those doses are fulfilled, the E.U. could inoculate its residents twice, Britain and the United States four times over and Canada six times over, according to our data analysis.

In the developing world, some countries may be able to vaccinate, at most, 20 percent of their populations in 2021, with some reaching immunity as late as 2024.

In many cases, the U.S. made its financial support for the vaccine’s development conditional on getting priority access. The country is heading toward authorizing another vaccine this week, from Moderna.

By the numbers: Britain has claimed 357 million doses in total, with options to buy 152 million more, while the European Union has secured 1.3 billion, with as many as 660 million doses more if it chooses.

A second wave has brought a new surge in infections to Sweden, leaving Stockholm’s emergency services overrun and forcing the authorities to recalibrate their approach.

Russia has released additional results from a clinical trial of its leading coronavirus vaccine, Sputnik V, showing an efficacy rate of 91.4 percent. AstraZeneca opened talks this month about combining efforts.

President Cyril Ramaphosa of South Africa announced new restrictions as the country entered a second coronavirus wave, with infections expected to rise over the festive season.

The European Medicines Agency said in a statement that it would move forward a meeting to decide whether to approve the Pfizer-BioNTech vaccine to Dec. 21 from Dec. 29.

The Hungarian Parliament on Tuesday passed sweeping measures that curtailed the rights of gay citizens, relaxed oversight of the spending of public funds and made it more difficult for opposition parties to challenge Prime Minister Viktor Orban in future elections.

The government justified its actions in a written explanation by saying that the Constitution “is a living framework which expresses the will of the nation, the manner in which we want to live.” Increasingly, “the will of the nation” is becoming indistinguishable from Mr. Orban’s own.

Analysis: The new laws are cause for “grave concern,” said Agnes Kovacs, a legal expert. Over more than a decade in power, Mr. Orban has torn at the fabric of democratic institutions in pursuit of what he calls an “illiberal” state.

Details: The legislation includes a constitutional amendment that would effectively bar gay couples from adopting children in Hungary by defining a family as including a man as the father and a woman as the mother. The amendment could also make it harder for single parents to adopt.

Somalia severed diplomatic ties with Kenya on Tuesday, accusing the neighboring East African nation of meddling in its internal political affairs. The move came weeks before a crucial general election.

“The federal government of Somalia reached this decision as an answer to the political violations and the Kenyan government’s continuous blatant interference recently in our country’s sovereignty,” said Osman Dubbe, the minister of information.

Context: The move injects an additional note of instability into an already shaky region, after the U.S. announced plans to withdraw troops from Somalia — which some fear will motivate the Shabab militant group to escalate its offensive across Somalia and the Horn of Africa.

With its top-notch immunization program and strong pharmaceutical industry, Brazil should be well-placed to curtail infections domestically. But political infighting, haphazard planning and a rising anti-vaccine movement have left the nation without a clear vaccination plan, our reporters found. Above, a vaccine trial in São Paulo this month.

Brazilians now have no sense of when a vaccine will come. The coronavirus has brought the public health system to its knees and has crushed the economy. “They’re playing with lives,” one epidemiologist said. “It’s borderline criminal.”

Big Tech: In a bid for tougher oversight of the technology industry, the authorities in the European Union and Britain introduced regulations to pressure the world’s biggest tech companies to take down harmful content and open themselves up to more competition.

Uighurs: Prosecutors at the International Criminal Court will not investigate allegations that China committed genocide and crimes against humanity over the mass detention of ethnic Uighurs in the Xinjiang region, saying China is not a party to the court.

South Korea: More than a dozen couriers in the country have died this year, some of whom had complained of workloads that kept them on the clock from dawn until past midnight. The deaths have caused a national uproar over their treatment.

Climate change: Cutting U.S. greenhouse gas emissions to zero by 2050 appears technically feasible and even affordable, but will be challenging, according to a major study by a team of energy experts at Princeton University.

U.S.-Russia relations: President Vladimir Putin of Russia congratulated Joe Biden on Tuesday on having won the American presidential election — more than a month after the Democrat became the president-elect.

Snapshot: Above, the owner of the Kiral Coffeehouse in Istanbul. Coffeehouses, mainstays of Turkish society for centuries, are suffering under pandemic restrictions, particularly after a ban was imposed on games people used to play for hours at a time. Many famous cafes have closed, and others are losing money quickly.

Lives lived: Over 21 years at the C.I.A., Dr. Jerrold Post pioneered the field of political psychology. Later, as an academic, he analyzed world figures including Bill Clinton, Tony Blair and — in his last book — President Trump. Dr. Post died at 86.

What we’re reading: Bloomberg Businessweek’s annual Jealousy List, in which its journalists highlight the stories from other outlets they wish they had written.

Cook: This hot and sour dumpling soup is no trouble to create at home and easily adjustable according to your preferences.

Watch: The inspirational documentary “Giving Voice,” currently on Netflix. It’s a film that worships the ways acting can instill determination in young people, writes our critic.

Do: Pretend you’re in Singapore with the help of our guide. Fry up some noodles, fix yourself a drink and transport yourself to the Lion City.

We’re here to help you enjoy the holidays with our At Home collection of ideas on what to read, cook, watch and do while staying safe at home.

The fast track to a virus

New vaccines against the coronavirus are a stunning story of scientific success. But they also fit a pattern that stretches back decades: Many of the biggest technological breakthroughs in American history have not sprung from the private sector. They have instead been the result of collaboration between private companies and the U.S. government.

The Defense Department, after all, built the internet. Government research and development also led to transistors, silicon chips, radar, jet airplanes, satellites, artificial limbs, cortisone, flat screens and much more. “Almost everything about your computer today — and the way you use it — stems from government funding at the early stages,” the economists Jonathan Gruber and Simon Johnson point out in their recent book, “Jump-Starting America.”

Why? Because basic research is usually too uncertain and expensive for any one company to afford. Often, it isn’t even clear which future products the research may create. No kitchen appliance company ever would have thought to do the military research that led to the microwave oven.

With Covid, the vaccines from both Pfizer and Moderna rely on years of government-funded (and sometimes government-conducted) research into viral proteins and genetics. That research, Kaiser Health News explains, is “the essential ingredient in the rapid development of vaccines in response to Covid-19.”

The federal help accelerated this year. The government funded Moderna’s work in recent months, as part of the billions it spent to make possible a record-breaking vaccine, The Atlantic’s Ed Yong writes.

What are the lessons for the post-Covid world? Solving the biggest challenges, like climate change, will almost certainly depend on a combination of public-sector funding and private-sector ingenuity.

Yet, federal funding of science has become a smaller part of the U.S. economy than it used to be. That means the Covid vaccine is both an inspiring success and something of an exception. “On its current course,” the economists write, “America seems unlikely to continue its dominance of invention.”

Thank you
David Leonhardt wrote today’s Back Story. Theodore Kim and Jahaan Singh provided the break from the news. You can reach the team at [email protected]

P.S.
• We’re listening to “The Daily.” Our latest episode is about America’s first coronavirus vaccinations.
• Here’s our Mini Crossword, and a clue: Salad green with a peppery taste (five letters). You can find all our puzzles here.
• The word “poikatsu,” the Japanese subculture of loyalty points hacking, first appeared in The Times on Tuesday, according to the Twitter account @NYT_first_said.
• Siddhartha Mahanta joined our Opinion desk as vertical editor for business, economics and technology. Most recently, he was managing editor of Rest of World, a digital magazine.