KARACHI, Pakistan — Eight years after Pakistan’s worst industrial fire killed 264 people and injured 60 others at a garment factory in the country’s largest city, a court has sentenced two men to hang for arson.

But for distraught families of the victims, justice was long delayed, and the verdict on Tuesday fell short.

It came after years of hearings and testimony from at least 400 witnesses. The slow pace of the trial frustrated victims’ families, who accused the police of failing to properly investigate and charge the real culprits.

Saeeda Khatoon, 50, whose 18-year-old son was killed in the 2012 fire at the complex owned by Ali Enterprises, said that the factory’s owners were equally responsible for the blaze because of lax safety standards.

“They have been provided a systematic escape,” she said of the owners, adding, “Only the lower tier of perpetrators were granted punishment.”

The fire raised questions about poor regulations in the country’s industrial and manufacturing sectors. Activists and victims’ families say factory owners have been mostly lax or negligent in setting up proper security protocols, leaving workers vulnerable to accidents. Corruption has also contributed to the poor enforcement of safety regulations.

The 2012 fire also shed light on the underbelly of Karachi’s politics, in which political parties have been accused of running armed rackets and extortion rings.

The two men sentenced this week, Abdul Rehman and Muhammad Zubair, formerly worked for the Muttahida Qaumi Movement, or MQM, a political party that has a history of political violence and once controlled the port city with an iron fist. It lost much of its clout in recent years after the country’s powerful military launched operations against armed members of the party.

The court found that Mr. Rehman and Mr. Zubair had set the factory ablaze in retribution because the owners had refused to pay extortion money.

In his 146-page verdict, Judge Abdul Qadoos Memon of the antiterrorism court in Karachi stressed that the fire had occurred because of “arson and sabotage,” not because of “gas leakage or electric short circuit.”

When the fire erupted on the evening of Sept. 11, 2012, in a commercial hub in Karachi, it quickly engulfed the building. The multistory complex — which manufactured ready-made garments, mainly for the German textile discount chain KiK — had no fire escape.

The windows of the building had iron grills. Workers desperately tried to escape, but most were trapped inside and consumed by fire. Many tried to save themselves by jumping from the top floors. Firefighters extinguished the blaze a day later. 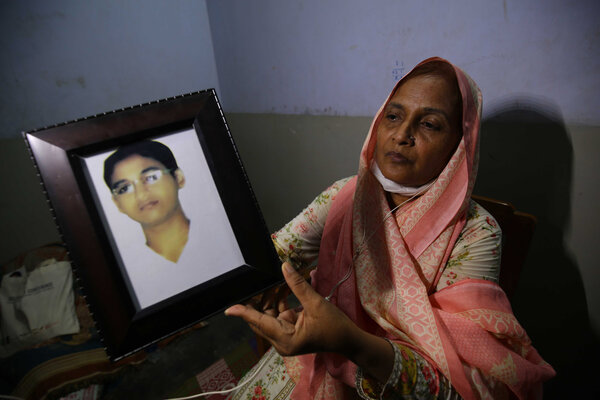 The factory’s owners, Arshad Bhaila and Shahid Bhaila, were initially arrested but were released on bail. They later moved abroad and were questioned by investigators via video link from Dubai. Raja Pervez Ashraf, then Pakistan’s prime minister, had urged that murder charges be dropped against the factory owners, local news outlets reported, setting off a public furor.

Investigators named an MQM official, Hammad Siddiqui, as the mastermind behind the extortion plot. Mr. Siddiqui demanded $1.2 million as protection money from the factory’s owners and plotted the fire after failing to get it, they said. But he has absconded.

The judge handed life sentences to four guards at the factory for contributing to the disaster by locking the exit doors. Four other people were acquitted for lack of evidence, including Rauf Siddiqui, a senior leader of MQM, and former provincial minister. No execution date has been set for Mr. Rehman and Mr. Zubair. At minimum, they will serve life sentences, but they can appeal the verdict.

Leaders of MQM, which since 2017 has splintered into different factions, portrayed the verdict as a vindication and expressed condolences for the victims. “We express our sympathies with the victims’ families as they had to wait for eight years to get justice,” said Faisal Sabzwari, an MQM leader.

Ali Haider Zaidi, a federal minister and member of the governing Pakistan Tehreek-e-Insaf party, said the verdict should give some closure to the families, but he noted that only low-level workers had been sentenced.

“Sad part of the verdict is that as usual, the facilitators, planners, aiders & abettors escape punishment while the little guy who committed these crimes on their orders get sentenced,” Mr. Zaidi said on Twitter.

Ms. Khatoon, who lost a son in the fire, has formed a victims group called Ali Enterprises Factory Fire Affectees. Along with relatives of three other victims, she sued KiK and has moved to file complaints against the Pakistani social auditing firm RINA, which granted fire-safety certificates to the factory seven days before the blaze.

After four years of campaigning and negotiations by a network of Pakistan’s labor rights groups with their global partners, KiK agreed to pay $5.15 million in compensation to the victims’ families through the International Labor Organization.

Muhammad Essa, a rickshaw driver whose nephew died in the fire, said that the family had been waiting for justice for a long time. “On that fateful day, my nephew left the home for the factory with a smile, but his body was returned to the home in the form of coal,” Mr. Essa said.

He added, “God will punish the culprits who burned innocent and poor workers alive in the factory.”