Before he was killed by an isolated tribe on a remote Indian Ocean island, John Allen Chau, a young American on a self-propelled mission to spread Christianity, revealed two things: that he was willing to die, and that he was scared.

“You guys might think I’m crazy in all this,” he wrote in a last letter to his parents. “But I think it’s worth it to declare Jesus to these people.”

Part letter, part journal, in 13 pages with many cross-outs and messy scrawl, Mr. Chau laid out a disturbing account of his final days on North Sentinel Island in the Andaman Sea east of India.

He tried to give gifts. A boy shot an arrow at him. He expressed fear, fatalism, frustration and some humor.

The people Mr. Chau chose for his mission are among the most impenetrable communities in the world, known for their intense hostility to outsiders. They have killed or tried to kill many outsiders who attempted to step on their rugged island 700 miles off India’s mainland, where they are one of the last undiluted hunter and gatherer societies.

On Friday, Indian police officials shared Mr. Chau’s last writing, part of which has been published by other news organizations over the past two days.

North Sentinel Island is a far-flung territory of India, and for years the Indian authorities have declared it off limits in an attempt to preserve its culture. The Indian Navy patrols the waters around it, making sure no one gets close.

But that didn’t stop Mr. Chau.

Last week, he paid some fishermen to take him to the island. He set off from Port Blair, the Andaman chain’s main port, under the cover of darkness.

“The Milky Way was above and God Himself was shielding us from the Coast Guard and Navy patrols,” he wrote.

A graduate of Oral Roberts University, he was fixated on spreading Christianity to North Sentinel, telling friends he had been working for years to make the right contacts.

It seems that he was working on his own and that no large organization had sent him. For this mission, he made sure to take his waterproof Bible.

But the fishermen refused to land him on North Sentinel. The last fishermen who accidentally drifted ashore, in 2006, were killed.

So Mr. Chau arranged for the boat to take him close and then jumped in a kayak and paddled in. His first moments didn’t go so well.

“Two armed Sentinelese came rushing out yelling,” he wrote in the letter. “They had two arrows each, unstrung, until they got closer. I hollered, ‘My name is John, I love you and Jesus loves you.’ ”

He gave them some fish, but the islanders kept coming toward him: “I turned and paddled like I never have in my life,” he said.

“I felt some fear but mainly was disappointed,” he admitted. “They didn’t accept me right away.”

Mr. Chau was trying to accomplish the impossible. The people on North Sentinel have not accepted anyone outside their society. Anthropologists, filmmakers and government officials have tried to approach them. Just about all have been driven back by bows and arrows.

Some years ago, a few anthropologists managed to give the islanders some coconuts, but that was about the extent of the contact.

The North Sentinel people have sealed themselves off from the modern world. They hunt turtles and pigs, wear loincloths and live in huts. Beyond that, very little is known.

In the late 19th century, a British naval officer working in the Andamans was so intrigued that he basically kidnapped several islanders. Some soon died, and the officer later wrote that his experiment had failed. 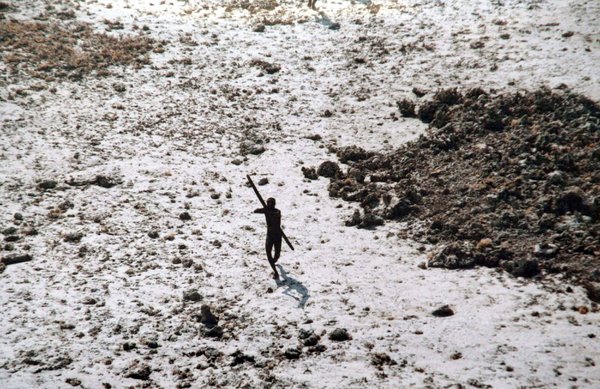 Anthropologists have struggled to decode their language and their history. The best guesses are that for centuries they have lived alone on their island, about the size of Manhattan, thick with forests and ringed by beautiful white sand beaches.

Anthropologists say the islanders’ ancestors possibly migrated from Africa more than a thousand years ago.

The population size? Estimates range from 50 to 100, but no one really knows.

Indian officials say any contact with the islanders could wipe out their culture and possibly even their existence since their immune systems may be no match for modern microbes.

Indian policy is to keep North Sentinel and a few other islands in the archipelago totally isolated, with no school, aid, development or government services.

Mr. Chau hoped to break through. He took a careful selection of gifts: scissors, safety pins, fishing line and a soccer ball.

But the people seemed variously amused, hostile and perplexed by his presence, he wrote.

He described a man wearing a white crown possibly made of flowers taking a “leadership stance” by standing atop the tallest coral rock on the beach.

The man yelled, and Mr. Chau tried to respond, singing some worship songs and yelling back something in Xhosa, a language he apparently knew a few words of from when he coached soccer in South Africa a few years ago.

“They would often fall silent after this,” he wrote. Other efforts to communicate with tribe members ended with their bursting out in laughter.

Encounters became more fraught. When Mr. Chau tried to hand over fish and a bundle of gifts, a boy shot an arrow “directly into my Bible which I was holding.”

“I grabbed the arrow shaft as it broke in my Bible and felt the arrow head,” he said. “It was metal, thin but very sharp.”

Mr. Chau stumbled back and shouted at the boy.

Over the next two days, Mr. Chau paddled back and forth in his kayak between the fishing boat and the island, unsure what to do.

The fishermen said he had told them to give the letter to a friend, in case he did not come back.

In one passage, he asked God if North Sentinel was “Satan’s last stronghold.” In another: “What makes them become this defensive and hostile?”

“It’s weird — actually no, it’s natural: I’m scared,” Mr. Chau wrote. “There, I said it. Also frustrated and uncertain — is it worth me going a foot to meet them?”

Still, he went back.

On the afternoon of Nov. 16, the fishermen told police officers, Mr. Chau reassured them that he would be fine staying on the island overnight and that the fishermen could go. They motored out, leaving Mr. Chau alone for the first time.

When they passed by the island the next morning, they saw the islanders dragging his body on the beach with a rope.

No one knows what exactly happened. Police officials said the islanders most likely killed him with bows and arrows.

Mr. Chau’s body is still on the island, but several police officers said they were worried about retrieving it, lest the same thing happen to them.

The police have flown helicopters overhead but not set foot on shore.

Before setting off that final day, Mr. Chau finished his note with a message to his family.

The handwriting gets sloppier, the lines more crooked.

“Please do not be angry at them or at God if I get killed,” he wrote.