SOPORE, Kashmir — Four men carrying pistols and wearing black masks knocked a week ago on the Hamidullah family’s gate. Furious that the wealthy apple traders had violated their ban on doing business, the militants announced that there was a price to pay.

They took three men into a sitting room in this Kashmiri town and shot them in the leg, right below their knees.

When 5-year-old Asma Jaan heard her father scream, she ran into the room to see what was wrong. The militants shot her, too. Now, confused and in pain, she lies bandaged up in a hospital bed and may not be able to walk for months.

“This has never happened before, that they hit out at a 5-year-old so mercilessly,” said her distraught aunt Nighat.

As the crisis in the Kashmir region drags into its sixth week, a visit by a New York Times journalist showed that the violence is morphing. The tensions, set off by India’s swift and unilateral decision last month to wipe out Kashmir’s autonomy, are no longer as simple as protesters pelting security officers with rocks and the officers firing shotguns back.

Kashmiri separatists are conducting their own reign of terror, threatening or even attacking civilians in a campaign to destroy any semblance of normality that may be creeping back after more than a month of heavy military crackdowns.

Beleaguered Kashmiris are now getting hit from two sides, caught between the militants and security forces who, residents say, continue to abuse and torture them.

Even as the Indian government begins to lift some of the restrictions that it imposed in Kashmir last month, the militants are enforcing their own restrictions, ordering people not to go to work or even leave their homes. Their intent is to paralyze life in Kashmir and make it ungovernable, raising tensions inside the region and with neighboring Pakistan, which also claims part of Kashmir. 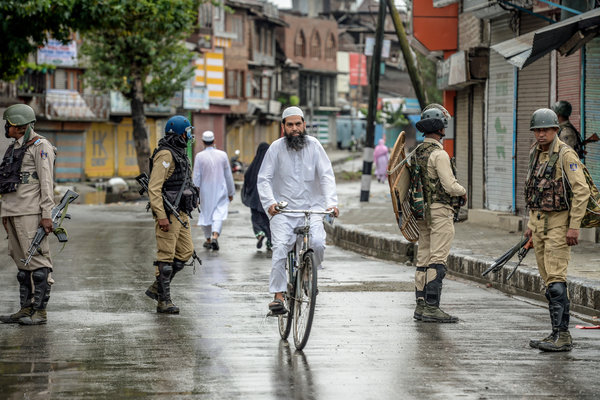 There is no doubt that most Kashmiris are bitter about the recent developments. On Aug. 5, the Indian government unilaterally wiped out the degree of autonomy that Jammu and Kashmir State, which includes the restive Kashmir Valley, had held since India’s independence.

Then, in anticipation of widespread outrage, India imposed punishing security measures, including cutting off cellphone and internet service to millions of Kashmiris and jailing more than 2,000 academics, politicians and activists.

While those moves infuriated a vast majority of Kashmiris, they are, at the same time, desperate to get back to the businesses, schooling and relationships that have been disrupted since the lockdown.

On the one side, they don’t want to show support or even acceptance of the Indian government’s actions. Many people sympathize with the militants, and fear them. They heed the mysterious fliers, posted at roundabouts or slipped quickly under the doors of Kashmiri news stations, warning people of consequences if they go back to work.

But as the clampdown stretches on, it gets harder to maintain resistance. People are running low on money and food. They have little to do, with schools, offices and markets closed and their phones dead. And so they feel trapped, torn between their sympathies and their needs.

As the days pass, more shops are opening and more people are moving about, perhaps explaining why the militants, determined to reinforce their message, resorted to deliberately shooting a child.

“We’re in the middle of nowhere,” said Aayat Tarik, a high school senior. “From this side, there are militants; from there, stone pelters and here, the military. They don’t care what happens to us. I don’t think anyone cares what happens to Kashmiris.”

Aayat hopes to be a doctor. But she said she had become so unsettled since her school closed on Aug. 5, along with almost all the others, that she can’t sleep.

Many of her male friends have been rounded up and beaten, she said. And men — militants or soldiers, she doesn’t know which — keep appearing in the middle of the night at the mosque next to her house, banging on the gate. Her younger brother can’t step outside because the family fears he could be taken by either side.

It has been another descent into hard times for Kashmir, a mountainous territory once fabled for its beauty that for decades has flared as a battlefield between Indian forces and insurgents backed by Pakistan. Since both India and Pakistan have nuclear arms, security experts consider the dispute over Kashmir one of the world’s most dangerous.

In recent weeks, India has beefed up its forces, deploying tens of thousands of extra troops. They suppress the small protests that frequently erupt and hunt down the tiny, quixotic militant force — perhaps 200 to 300 young men from a handful of groups, mostly Kashmiri, a few from Pakistan, local officials say.

The insurgents say they are fighting to split Kashmir off from India and create a separate state, but militarily they are insignificant. The security forces steadily hunt them down and apply enormous pressure on anyone close to them.

One morning last month, according to several witnesses, soldiers summoned Bashir Ahmed Dar, a plumber whose brother had become a militant. At an army camp near the village of Heff Shirmal, the soldiers demanded that Mr. Dar disclose where his brother was hiding.

After Mr. Dar told them he didn’t know, he said, the soldiers smashed his body with sticks, kicked him in the ribs and broadcast his sobbing pleas for mercy from loudspeakers on the road, terrorizing his village.

Then, Mr. Dar said, the soldiers ransacked his house and dumped his supply of rice, flour and kerosene into a water tank, contaminating it.

Several news organizations, including the BBC, have recently reported Kashmiri residents’ accusations of torture and sadistic behavior by Indian military personnel. Indian officials have called them baseless, and a spokeswoman for India’s home ministry declined to comment for this article.

Ajit Doval, India’s national security chief, blames Pakistan for Kashmir’s problems. If the internet is restored in Kashmir, he says, Pakistan will flood it with misleading information and stir up hatred. If the Indian soldiers relax, Pakistan will exploit the situation and send in more militants.

“They will be very happy if there is bloodshed,” Mr. Doval said.

Pakistani officials have denied India’s accusations of supporting militants. The country’s prime minister, Imran Khan, has harshly criticized India’s crackdown and has called for international intervention to keep the countries from stumbling into another war.

Indian officials say the chances of war are close to zero and insist that Kashmir is getting back to normal. Land-line telephone service has been restored in some areas, and many of the military barricades that blocked the roads just a few weeks ago have been removed.

Asif Majeeb Dar, a young man who works behind a cafe counter at the airport in Srinagar, Kashmir’s biggest city, said that before India’s move on Kashmir, few people supported the militants.

“But that’s changing,” he said. “The government has forced our hand.”

Many Kashmiris feel that Prime Minister Narendra Modi of India betrayed them. They don’t like even hearing his name.

“My mom says, ‘Stay away from the TV, don’t pay any attention to Modi, just get back to your studies,’” said Sofi Maryam Javeed, a fifth-grade student.

The competing pressures that people face put them in untenable positions every day.

One of them, a wholesaler named Ghulam Mohammed Mir, had been warned by militants to close the shop where he sold rice, flour, sugar and other provisions. The separatists fatally shot him on Aug. 29, according to witnesses and security officials.

Other shopkeepers expressed little sympathy. Several said he deserved it because he had been warned.

But a prominent merchant is one thing; a 5-year-old girl another. A new sense of outrage has been stirred up by the militants’ shooting of Asma Jaan after wounding three men at her family’s home.

As a wealthy apple trader, Hamidullah, the girl’s grandfather, had hundreds of thousands of dollars in debt, and said he needed to move his apples to stay afloat. Apples are a huge business in Kashmir, the source of countless livelihoods, and several Kashmiris said shooting a child crossed a line.

“Those militants committed a heinous crime,’’ said Irshad Ahmed, a waiter at a Srinagar hotel. “Who do you think will side with them now?’’