KABUL, Afghanistan — Afghanistan’s coalition government fired on Tuesday all the commissioners who directed fraud-tainted parliamentary elections last fall, as the country prepares for a presidential race this summer and watches, with its leaders on the sidelines, peace talks unfold between Americans and the Taliban.

The move follows a push by some opposition politicians to postpone the election and form an interim government that, as part of a peace deal, could include the Taliban. President Ashraf Ghani, who has fumed over the government’s exclusion from the American-Taliban talks, has insisted that the election be held on time.

The firings, which came after a series of meetings between the government, civil society groups and political parties, were portrayed as a badly needed consensus on electoral reform. The commissioners called their dismissal a political decision by officials who hope to serve in a new government.

The election had already been pushed back from April to July. The panel behind that decision, the Independent Election Commission, was one of two whose members were removed on Tuesday.

Replacement commissioners named by Mr. Ghani and his coalition partner, Abdullah Abdullah, will be charged with preparing for a presidential election that will feature both men as candidates.

Mr. Ghani has said that only a central government with a strong mandate can negotiate on behalf of the country. The Taliban, dealing directly with the Americans, have refused to include an Afghan government they consider illegitimate.

Zalmay Khalilizad, the leader of the American delegation, said last week that he hoped to secure a peace deal before the July election. He said last month that the United States and the Taliban had agreed in principle to the framework of a peace deal.

The Afghan election commission was widely accused of sowing confusion and disarray during and after the October parliamentary elections, which were three years late and tainted by accusations of vote-rigging, bribery and incompetence. Winners have been certified for only about a third of the 250 seats in Parliament.

The attorney general’s office has prosecuted 313 people accused of violations including forging or selling election stickers and national ID cards needed to cast a vote.

In a statement late Tuesday, the office said that the 12 commissioners from the two election bodies were barred from leaving the country, and that investigators had been appointed to look into charges of abuse of authority.

The firings have set up a legal confrontation, with all of the dismissed members saying the move violated election law. 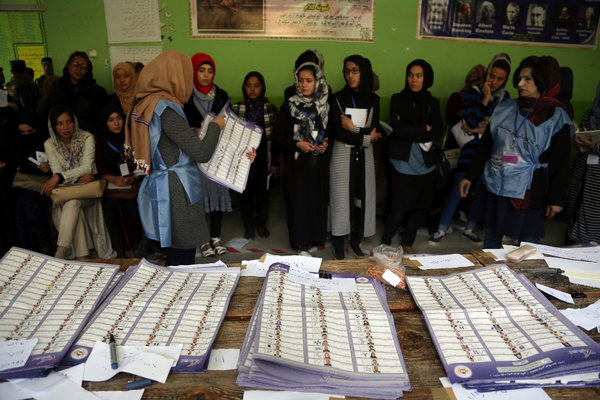 “The amendment of the election law by a presidential decree of a president who is also a candidate is against the Constitution,” the commissioners said in a joint statement. “This is a political decision, not a legal or constitutional one.”

Mr. Ghani’s deputy spokesman, Shahhusain Murtazawi, said the election results remain in place for now. He said protests could be lodged with the second affected commission, called the Independent Election Complaint Commission, or with judicial groups. The head of the commission’s secretariat remains in place as acting director.

Given that the officials who administered the election have now been fired, some of the roughly 2,000 losing candidates are expected to protest. If the results are re-examined or canceled, it would affect preparations for a presidential election already behind schedule — with no assurance that the required funding is in place.

One losing parliamentary candidate, Fawad Aman, said anyone seated in Parliament would remain under a cloud of suspicion. And if the commissioners were not punished, he said, Afghans could lose faith in the electoral process and refrain from voting.

“If they are just dismissed and not prosecuted, it means this is a political game so that the president can have more influence in election commissions and the presidential election,” Mr. Aman said.

Nayim Ayubzada, head of the Transparent Election Foundation for Afghanistan, an independent election monitoring group, said that the firings were made too hastily and that the government had paid too little attention to the legal process for addressing fraud accusations.

“We worry about this decision because the president is a candidate himself and he may do all these things to turn things in his favor,” Mr. Ayubzada said. “If he decides so hastily about election issues, it will raise questions about the transparency of elections.”

Mr. Ghani and Mr. Abdullah will appoint new heads and members of the commissions, selected from candidates put forward by civil society groups and political parties within the next week.

Supporters of the firings said they were necessary to make commissioners accountable for bungling an expensive election process that was secured by Afghan forces amid a raging war. Each Afghan election, bankrolled by international donations, has proved at least as problematic as the last.

The 2014 presidential election was so fraudulent that, when the two leading candidates claimed victory, it nearly tore the country apart and prompted Western officials to step in as mediators. John Kerry, then the secretary of state, negotiated a power-sharing government between the top two candidates, Mr. Ghani and Mr. Abdullah, with a promise that they would prioritize election reforms to avoid another fiasco.

The two men were slow to make progress on reforms, given infighting in the government and the war with the Taliban. Now Mr. Ghani and Mr. Abdullah get to name new commissioners to oversee an election during the peak of the summer fighting season and as the peace process plays out.

Those challenges have left many Afghans skeptical of what new commissioners can do. Mr. Ayubzada, the election observer, said he doubted the presidential election would even be held this year, because the process was “so overshadowed by ongoing peace talks and political dealing.”