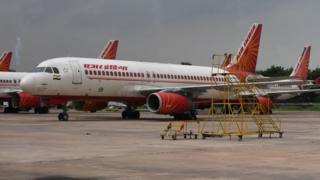 India’s national airline has told its crew to end every in-flight announcement with the patriotic phrase, “Jai Hind” (Hail the motherland) – and this has tickled social media users.

Air India’s company advisory instructs crew to say the phrase after a “slight pause and with much fervour”.

This quickly inspired tweets of imaginary in-flight announcements that end with “Jai Hind”.

But many wondered if patriotism was the right focus for the struggling airline.

The directive from Air India comes at a time when patriotism is particularly high in India.

The country has been at loggerheads with its nuclear-armed neighbour Pakistan over the past few weeks, following a deadly suicide bombing that killed at least 40 Indian paramilitary troops in the disputed Kashmir region.

The incident which led to airstrikes by India and the subsequent capture and release of an Indian pilot by Pakistan, saw increasing nationalist sentiment fuelled by national and social media.

While some people welcomed the Air India directive on Monday, others joked about how unusual it might sound to end in-flight announcements – mundane or otherwise – with an energetic “Jai Hind”.

With much fervour
?
"The captain would like to announce some Turbulence coming your way… Jai Hind"

Sums up the country I think https://t.co/EIvXfPDB2q

Ladies and gentlemen, we are passing through turbulent weather, please fasten your seatbelts belts, Jai Hind!

Please do not use the toilets now, Jai Hind!

We apologize for the delay in departure, Jai Hind!https://t.co/uC25ccGk6r

One Twitter user even suggested a competition to see which passengers respond with the loudest “Jai Hind” – with the winner getting a free upgrade.

Air India, the country’s oldest running commercial airline, has long been the butt of jokes focusing on its customer service and old planes. It was recently in the news for a bed bug infestation on one of its aircraft.

So Twitter users did not miss the opportunity to also poke fun at the airline for delays and cancellations.

Dear passengers, our flight is delayed by 10 hours. #JaiHind