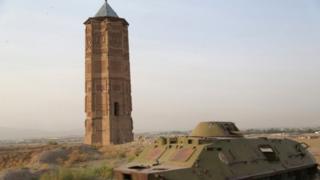 An ancient tower in the Afghan city of Ghazni has collapsed, raising questions over the government’s ability to protect the country’s artefacts.

Footage uploaded to social media shows a fort in the old city crumbling.

The tower was one of dozens already destroyed in the city. Officials blamed heavy rain, but some critics accuse the government of negligence.

Ghazni’s Islamic and pre-Islamic architecture is widely admired although war has taken its toll.

Mohammad Saber Mohmand, a spokesman for the ministry of information and culture, told Tolo News the fort was “vulnerable to rainfall and mostly damaged by rain”.

“The main highway is located near the fort, which affects the towers,” he added.

Ghazni was a thriving Buddhist centre up until the 7th Century. But in 683 AD, Arab armies brought Islam to the region. In the 13th Century it was destroyed by the Mongol armies of Genghis Khan, led by his son Ogedei Khan.

The ancient city has been designated an Asian city of Islamic Culture by the Organisation of Islamic Co-operation.

However, many of the city’s ancient buildings have been difficult for outsiders to visit due to the Taliban insurgency.