Bombers struck a huge crowd outside the airport, killing dozens of civilians in the waning days of the U.S. evacuation from Afghanistan. 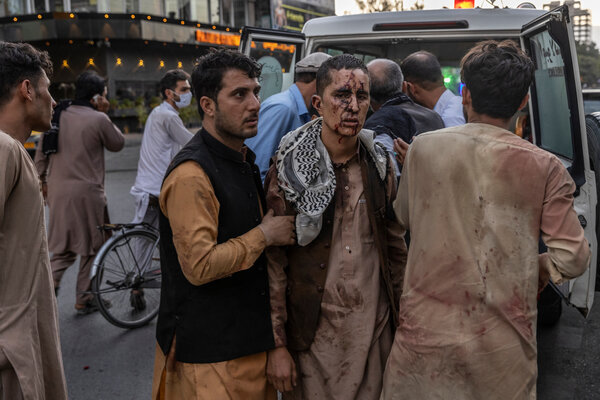 KABUL — Two explosions killed dozens of people, including at least 12 U.S. troops, ripping through the crowds outside Afghanistan’s main airport on Thursday, just hours after Western governments had warned of an imminent Islamic State attack and told their people to stay away from the airport.

The attack, by at least two suicide bombers, struck at the only avenue of escape for the thousands of foreign nationals and tens — or hundreds — of thousands of their Afghan allies who are trying to flee the country following the Taliban takeover and ahead of the final withdrawal of U.S. troops, set for next Tuesday.

Afghan health officials gave varying estimates of the toll at the international airport in Kabul, the capital — from at least 30 dead to more than 60, and from 120 wounded to 140 — while a Taliban spokesman cited at least 13 civilians killed and 60 wounded.

For American forces, the attacks were a gruesome coda to almost 20 years of warfare in Afghanistan — one of their heaviest losses, just days before they are set to leave the country. In addition to 13 service members killed, 15 were wounded, the Pentagon said.

“We’re outraged as well as heartbroken,” President Biden said in an address from the White House. “Know this,” he said to the attackers. “We will not forgive. We will not forget. We will hunt you down and make you pay. I will defend our interests and our people with every measure at my command.”

Bystanders hoping to find survivors picked their way among torn and bloodied bodies that littered the ground outside one of the airport’s main gates, or waded into a drainage canal where other bodies bobbed in the water.

“I saw bodies of women, children and men scattered all around after the blast,” said one Afghan witness, who requested anonymity because he feared for his safety. He said he and other civilians, along with Taliban fighters, fled after the first explosion, because there were rumors that the Islamic State “had sent four suicide bombers,” and he feared more detonations.

The bombings hint at a new round of violence that may lie in store for a people and a country that have suffered more than 40 years of warfare, as the Taliban militants’ new regime is being challenged by still more extreme groups like the Islamic State Khorasan, the terrorist branch known as ISIS-K.

The Islamic State claimed responsibility for the attacks on behalf of its loyalists in Afghanistan.