BANGKOK — Protests in Thailand that began as a student-led revolt against the military’s influence on the classroom have ballooned to encompass a sweeping range of issues at the heart of the country’s deep-rooted social and economic disparities.

The growing crowds of demonstrators who have been assembling for weeks at peaceful protests across the country have made three primary demands, encapsulated by the slogan “Resign, Rewrite, Reform.”

They are calling for the resignation of Prime Minister Prayuth Chan-ocha, a former army chief and the architect of a 2014 coup; the overhaul of a Constitution he pushed through that took power from citizens and created an appointed Senate; and bringing the monarchy under the purview of the Constitution.

As the protests have grown, Mr. Prayuth has adopted a more conciliatory approach. But the protesters appear to be unmoved.

Is Thailand governed by a king? Or the military? 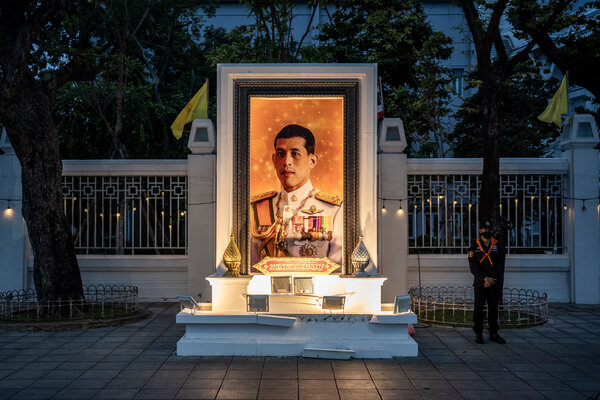 Thailand ended its absolute monarchy and established itself as a constitutional monarchy in 1932. But its political system has never found stability for long. The military has played a key role in politics, with a dozen successful coups against elected leaders, most recently in 2006 and 2014. The country is now on its 20th Constitution.

The monarchy is protected by Thailand’s powerful lese-majeste law, which can bring a sentence of up to 15 years in prison for making statements deemed critical of members of the royal family.

Laws on sedition and criminal defamation, as well as a computer crimes law that governs online content, can also be used to limit free speech.

Who are the key players?

The protesters: They are mostly students, including many in high school, who are unaligned with earlier anti-government factions. Many initially chafed at military-style school rules over their behavior and attire. That dissatisfaction has grown into a broader challenge to the government, the military and the monarchy. A three-finger salute signifying silent rebellion, taken from the “Hunger Games” films, has become a symbol of defiance. The protests started in Bangkok and have spread to other provinces.

The prime minister: As the head of the army in 2014, then-General Prayuth led a coup that ousted a democratically elected government. He has remained as the head of government since then. He pushed through a new Constitution that took effect in 2017, weakening the power of political parties in Parliament, allowing for an appointed Senate and ensuring continued military influence over the government. A newly constituted Parliament elected him prime minister in 2019. Now 66, Mr. Prayuth has refused protesters’ demands that he resign and has called on Parliament to help resolve the conflict.

The king: Maha Vajiralongkorn Bodindradebayavarangkun, 68, one of the world’s richest men, ascended to the throne in 2016 after the death of his father, the revered King Bhumibol Adulyadej, who reigned for seven decades. Since becoming king, Maha Vajiralongkorn has continued to spend most of his time in Germany, returning to Thailand for relatively short periods. He has asserted his authority by taking personal control of the crown assets and by requesting changes to the Constitution after voters ratified it in a junta-controlled 2016 referendum.

The royalists: Supporters of the monarchy, often identifiable by their yellow shirts, have taken to the streets in smaller numbers to counter the student protesters, sometimes clashing with them. Protesters have posted videos online that they say show royalists attacking them.

What are the protesters demanding?

They also call for the dissolution of Parliament, the same body that chose Mr. Prayuth as prime minister and that he has called on to resolve the current conflict.

Their boldest demand is to limit the power of the monarchy, which has seldom faced a challenge in the last 88 years. Among other steps, they want the king to return control of the crown assets, worth tens of billions of dollars, and to relinquish direct control over certain Thai Army units.

What have been the key events in the protests?

The plaque: In September, thousands of protesters gathered in Bangkok at the biggest pro-democracy rally yet. Afterward, a group placed a plaque near the royal palace that displayed the three-finger salute and read, “At this place, the people have expressed their will that this country belongs to the people and is not the property of the monarchy, as they have deceived us.” Officials removed the plaque soon after.

The queen’s motorcade: During an Oct. 14 protest in Bangkok, a limousine carrying Queen Suthida Vajiralongkorn Na Ayudhya unexpectedly drove past a crowd of protesters. Some yelled “My taxes” and gave the three-finger salute. Several protesters were later arrested and could face harsh penalties under an obscure law that prohibits “an act of violence against the queen’s liberty.” The government issued an emergency decree that banned gatherings of more than four people and authorized sanctions on media outlets deemed to have disseminated false information.

Water cannons deployed: As thousands of protesters occupied commercial streets in Bangkok on Oct. 16, the police dispersed them with water cannons, spraying liquid that contained blue dye and a chemical irritant. Appalled by this tactic, demonstrators ignored the emergency decree and turned out in even bigger numbers for rallies in the following days. Mr. Prayuth revoked the emergency decree on Oct. 22, a day after acknowledging that Thailand would not become “a better society through the use of water cannon.”