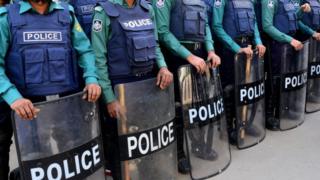 Police in Bangladesh have broken up a fight between hundreds of Chinese and Bangladeshi workers at the site of a partly-built China-funded power plant.

One Chinese worker was killed in the fighting in the southern district of Patuakhali, police told the BBC.

Violence erupted after a Bangladeshi worker fell to his death, and local workers reportedly accused the Chinese of trying to cover up the incident.

Police said more than 1,000 officers were needed to restore calm.

Correspondents say that in some areas, the large number of Chinese workers has led to tensions with local communities.

Local police chief Moinul Hasan told BBC Bengali that a Bangladeshi worker had died after falling from a height on Tuesday night and an argument then broke out between the two groups of workers before erupting into violence.

More than a dozen workers were injured, six of them Chinese, police added. One of the Chinese workers suffered head injuries and later died in hospital.

Regional administrator Ram Chandra Das said an investigation had been launched into the incident. No arrests were made and the situation is now calm, he told AFP news agency.

Tensions involving local people and Chinese-funded projects have spilled over before. In 2016, police opened fire on villagers in south-eastern Bangladesh as they protested against the construction of two China-backed power plants. Four people were killed.

Beijing’s funding for major infrastructure projects around the world is known as the Belt and Road Initiative. It is seen as a new Silk Road which, like the ancient trade route, is aimed at speeding Chinese goods to markets further afield.

Critics, however, see it also as a bid for Chinese geo-political and strategic influence.

Meghan, Duchess of Sussex and Prince Harry released details on their exit from the Royal Family amid weeks of speculation on the future of the…