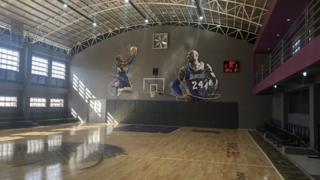 Just hours before Kobe Bryant died in a helicopter crash on Sunday, a new basketball hall had opened in the Philippines, named in his honour.

“I can’t understand it. Just 12 hours’ gap from ribbon cutting and hearing the news,” said Congressman Eric Martinez, the man behind The House of Kobe in Valenzuela City.

“Everyone has been fighting back tears today. This is a basketball-loving nation.”

Kobe Bryant has always been hugely popular in the Philippines, where basketball is the national sport and obsession.

He visited the country seven times over the years, winning him the affection of Philippine basketball fans.

But the decision to name it after the NBA star was only made last week inspired largely by Bryant’s mantra of upward social mobility.

The wall of the new basketball centre has now become a tribute to the former LA Lakers player.

“Rest in paradise my hero,” said one message. “Always be a legend,” said another. “Incredible family man.”

“It’s just sad. It feels like I lost a brother that I look up to,” said one fan, Marti Dadia, 33 from Laguna.

“I named my son Kobe not just because of his on-court skills but more on how he inspires people to have the drive to be the best version of themselves in whatever field they are in.”

Dadia’s comments reflect what Kobe himself called the Mamba Mentality, a belief that to succeed in life a person must give their all and not be afraid of failure.

‘Filipinos loved him back’

Basketball is the most popular sport in the Philippines, a legacy of America’s occupation of the country which ended in 1946.

The Philippine Basketball Association (PBA), which was founded in 1975, was the first professional basketball league in Asia and is closely modelled on the NBA.

Philippine television channels screen up to 10 games a week and many in the country dream of becoming professional players.

For many in the Philippines, Kobe’s life represented the ideals of Filipino values and sensibilities.

He was a humble, hardworking family man who remained loyal to his team, serving the Los Angeles Lakers for his entire 20-year career.

On Monday, news channels were rolling on the story of Kobe’s death, carrying tributes from various Philippines sports stars and celebrities.

One headline, on ABC CBS, read: “Kobe Bryant showed Philippines love, and Filipinos loved him back”

The world lost a legend today but the impact and legacy he leaves behind will last forever! #RIPMamba

The world lost a legend today but the impact and legacy he leaves behind will last forever! #RIPMamba

Philippine senator and boxer Manny Pacquiao, who also owns and plays for a local basketball team, posted this tribute to Bryant on Instagram:

“The world lost a legend today but the impact and legacy he leaves behind will last forever!”

BBC News presenter Rico Hizon, who is from the Philippines and met the basketball player in 2009, said of the encounter: “When he walked through the door we body-popped and fist-bumped, he made me so comfortable from the onset.”.

“He was so nice. So funny, so accommodating, humble and very down to earth.” he added.

“But beyond his athletic skills, he was known for his caring heart and love of family.

“His life was an inspiration and a lesson to everyone that with hard work, dedication and self-sacrifice, nothing is impossible.”