The president cited “significant progress’’ in getting Americans out of Afghanistan. But Afghans linked to U.S. troops and other Western groups fear being left behind. 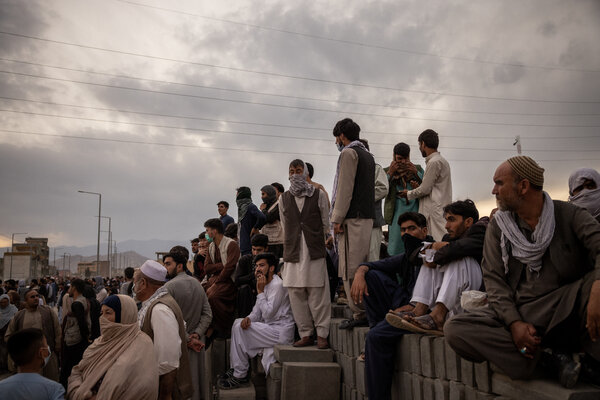 LONDON — The desperate scenes at the Kabul airport reverberated around the world on Friday, forcing President Biden to defend his handling of the chaotic evacuation and fueling recrimination from American allies that are struggling to get their own citizens out of Taliban-controlled Afghanistan.

Mr. Biden insisted the American-led operation made “significant progress” after a rocky start, with nearly 6,000 American troops evacuating 5,700 Americans, Afghans, and others on Thursday. Flights were suspended for several hours on Friday to process the crush of people at the airport, but they were resuming, he said.

“We’re acting with dispatch,” Mr. Biden said at the White House. “Any American who wants to come home, we will get you home.”

The president’s reassuring words, however, conflicted jarringly with the grim reality in Kabul, where panic reigned and the Taliban encircled the airport in a ring of terror. While Mr. Biden pledged not to abandon American citizens or Afghans who helped the United States, he left untold others in a dangerous limbo, conceding, “I cannot promise what the final outcome will be.”

Thousands of Afghans continued to besiege the airport gates, begging to get on planes as Taliban militants menaced them with sticks and rifle butts. Anxious crowds were pressed up against blast walls, with women and children hoisted into the arms of American troops on the other side.

In one harrowing image, a Marine leaned over razor wire to grasp a wailing baby from outstretched hands. The Pentagon said the baby was sick, received treatment and was later returned to his father.

Many more people were simply turned away, repulsed by reddish clouds of tear gas and volleys of rifle fire above their heads. A Taliban fighter put a gun to the head of one man and warned him, “Go back to your home or I will shoot you,” according to a person who witnessed the encounter.

While the south side of the airfield — the site of anguished scenes earlier in the week — was calmer on Friday, a witness reported that the gate at the north side, where American troops are in control, was mobbed. American-trained Afghan special forces units pushed back the crowds, some shooting in the air. The staccato pops of gunfire mixed with the roar of planes taking off.

On the airport’s eastern perimeter, hundreds of Afghans jostled with British soldiers as they tried to get into a British-controlled compound. In video posted to social media by the BBC, troops ordered people away from the entrance. Footage showed a soldier hurling a man to the ground.