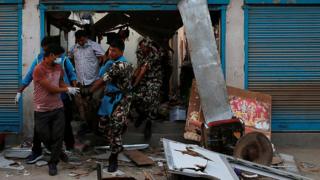 At least three people have died in two explosions in the Nepali capital, Kathmandu, officials say.

Five other people were injured in the blasts – one in the city centre and the other in the outskirts, KTV reported.

The causes of the blasts are not yet clear but the Himalayan Times, quoting police, said they were “improvised explosive devices”.

Security forces have sealed off both locations and say investigations are under way.

A police chief said pamphlets belonging to a Maoist splinter group had been found at the scene of one of the blasts.

The same group was suspected to have carried out an explosion in February that killed one person in Kathmandu.