The militants engage the former officials Hamid Karzai and Abdullah Abdullah, as well as Moscow, to seek help in building an “inclusive” government while cementing their rule. 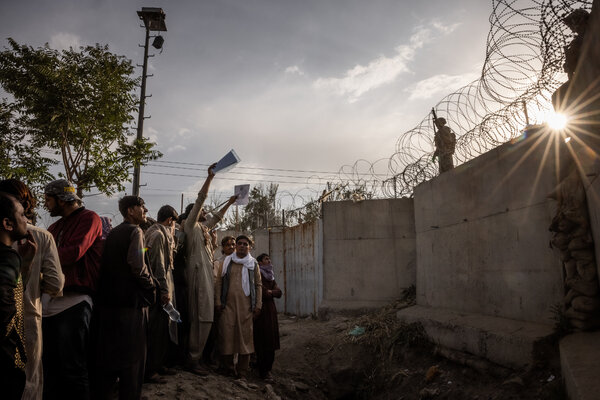 As lethal mayhem persisted outside Kabul airport, with thousands of terrified Afghans trying to flee, the Taliban have reached out to a former Afghan president, Hamid Karzai, and to Russia in an attempt to fulfill their pledge to form an “inclusive” government and defeat holdouts against their rule.

Little in the Taliban’s history suggests readiness to compromise on their harsh Islamist principles or to share power, but the United States has warned the militant group that going it alone will result in continuous conflict and isolation. In this context, Mr. Karzai, who led the county between 2001 and 2014, appears to have emerged as a possible mediator.

Mr. Karzai, 63, a wily maneuverer who as president fell out with the United States over American drone attacks, corruption allegations and other issues, has stepped into the void left by the flight a week ago of President Ashraf Ghani. He has met with Taliban leaders, including Khalil Haqqani, who has been designated as a terrorist by the United States, and is working closely with Abdullah Abdullah, the head of the former Afghan’s government’s peace delegation.

A Taliban leader described as the acting governor of Kabul, Mullah Abdul Rahman Mansour, talked over the weekend with Mr. Karzai and Mr. Abdullah. A growing number of senior Taliban have been seen in Kabul in recent days to discuss the shape of the next government, among them Mullah Abdul Ghani Baradar, the Taliban’s chief diplomat and a senior official in the group’s government in the 1990s.

A deputy within the Taliban’s cultural affairs committee, Ahmadullah Waseq, said Saturday that although the Taliban officials were mostly talking among themselves to prepare for more formal negotiations, “we will talk with other parties to form an inclusive government acceptable to all Afghans.”

A delegation of Taliban leaders also visited the Russian Embassy in Kabul, asking officials there to pass along an offer of negotiations to a group of Afghan leaders holding out in northern Afghanistan, the Russian ambassador, Dmitri Zhirnov, told a Russian television interviewer on Saturday.

How the United States will view Mr. Karzai’s re-emergence was unclear. So, too, was whether Afghans would believe the sudden professed moderation of the Taliban, whose oppression of women and brutality have been hallmarks of their fundamentalism.

A week after the Taliban overran the country and the two-decade long American attempt to shape a democratic Afghanistan collapsed, there was no sign of any cabinet taking form.