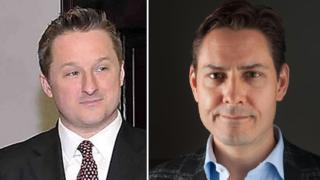 China has accused two Canadians of spying, as tensions between the nations grow over the possible extradition of a Huawei executive to the US.

Michael Kovrig, a former diplomat, and Michael Spavor, a businessman, were detained in December after Meng Wanzhou was arrested in Canada on suspicion of fraud and breaching sanctions on Iran.

Ms Meng is suing Canada over her arrest, which was made at the request of the US.

The diplomatic spat has hurt Canada-China relations, and the arrest of the two Canadians had been seen as Beijing’s retaliation for its detention of Ms Meng.

Canada officially launched her extradition process on Friday but the legal process can be lengthy and remains in its early stages.

On Monday, Chinese authorities detailed their allegations against Mr Kovrig and Mr Spavor for the first time.

It said that Michael Spavor “had provided intelligence to Kovrig and was an important intelligence contact of [his]”.

Until now China had not provided detailed allegations against the pair, only saying that they were suspected of hurting China’s security.

The ICG is yet to comment on the latest accusations but previously said: “Nothing Michael does has harmed China. On the contrary, Crisis Group’s work aims to defuse any tensions between China and nearby states, and to give a fresh, independent appraisal of China’s growing role in the world.”.

It said his work involved meeting officials, academics and analysts and attending conferences.

Mr Spavor lives in the Chinese city of Dandong, which borders North Korea. He has close ties to the North Korean regime and brings foreign investors there on tours.

Canadian Prime Minister Justin Trudeau has called for the release of both men.