The soldiers run through the forest, through the surf, through smoke and flames, ready to die for the motherland. The video, one of a series that has recently appeared online in China, climaxes with the launch of nine ballistic missiles and a fiery barrage of explosions.

“If war breaks out,” a chorus sings, “this is my answer.”

Chinese propaganda is rarely subtle or particularly persuasive, but the torrent of bombast online and in state media in recent weeks is striking and potentially ominous.

The targets are China’s main adversaries: the United States and Taiwan, which are moving closer and closer together.

The propaganda has accompanied a series of military drills in recent weeks, including the test-firing of ballistic missiles and the buzzing of Taiwan’s airspace. Together, they are intended to draw stark red lines for the United States, signaling that China would not shrink from a military clash.

While the prospect of war remains remote, the militaristic tone reflects the hawkishness of the country’s leader, Xi Jinping. The risk is that the propaganda could translate into more provocative actions, at a time when the relationship with the United States has sharply deteriorated. The recent military moves in the South China Sea and the Taiwan Strait raise the possibility of actual clashes, intended or not.

In Washington, President Trump’s hospitalization for treatment of Covid-19 has overshadowed everything else, creating the impression that his administration is in chaos and raising fears of a decision-making void. Secretary of State Mike Pompeo cut short his trip to Asia this week, although he is expected to push for confronting China when he meets in Tokyo with his counterparts from Australia, India and Japan.

China is already facing pressure over Taiwan and is pressing other disputed territorial claims, from the South China Sea to the Himalayas. If China feels directly challenged on any of those fronts, Mr. Xi may not be able to back down, having primed the public for a combative stance.

One video featured a simulated airstrike on Guam, the American territory in the Pacific, with clips cribbed from two Hollywood films, “The Rock” and “The Hurt Locker.” 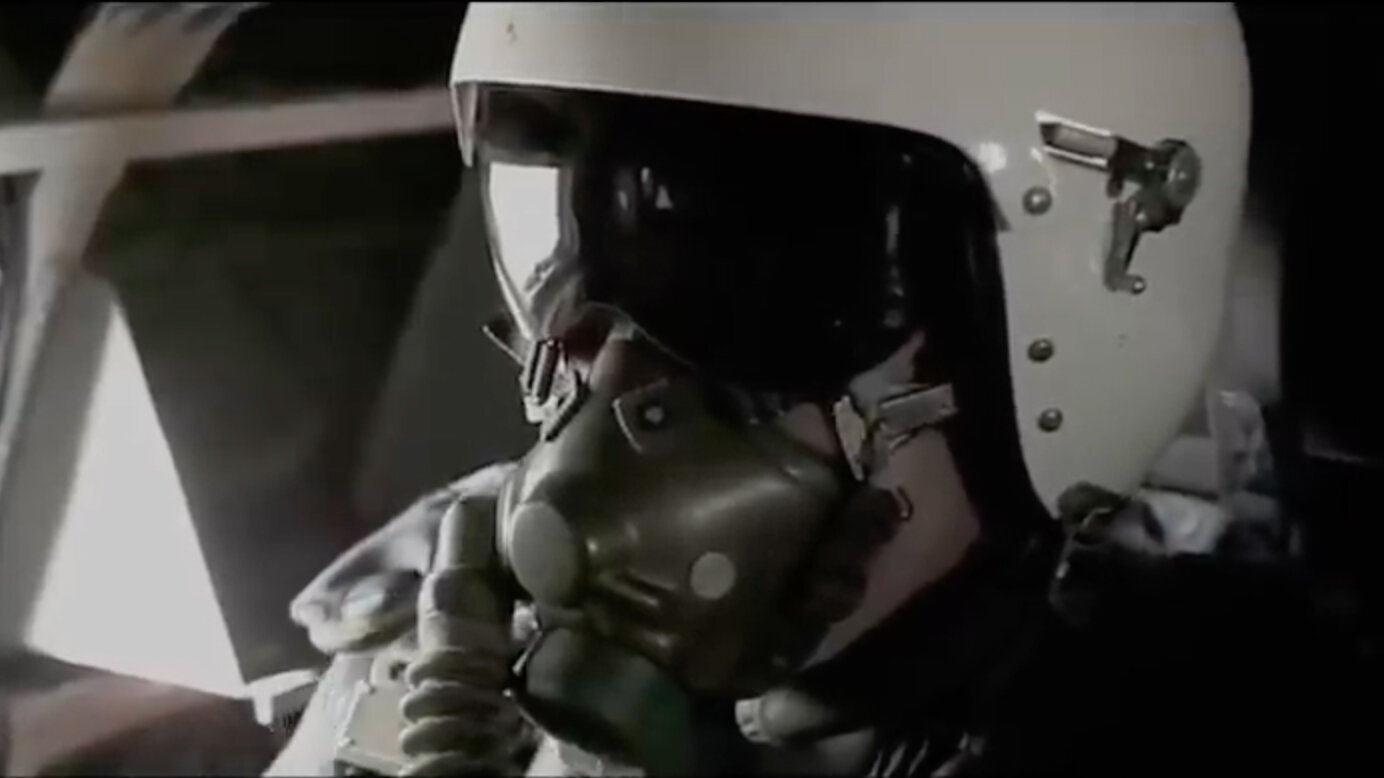 Global Times, the voice of the Communist Party’s hawks, warned recently that the United States was “playing with fire” by supporting Taiwan, which Beijing claims as part of a unified China. Taiwan’s president, Tsai Ing-wen, the editorial went on, would be “wiped out” if she moved against Chinese sovereignty.

“I don’t think it’s just bluster, and I don’t think it’s just about venting anger,” said Bonnie S. Glaser, director of the China Power Project at the Center for Strategic and International Studies in Washington, who is an expert on Taiwan and China. “I think there is growing pressure — and that Xi Jinping finds that it’s useful to display that pressure.”

More bombast is to come. The latest propaganda surge has coincided with the 70th anniversary of the Korean War, also known in China as the War to Resist U.S. Aggression and Aid Korea, which has long served as an instrument for stoking anti-American sentiment.

Chinese forces intervened in the war on Oct. 19, 1950, and, as official narratives here have it, ultimately drove the American-led United Nations forces back to the 38th parallel in a heroic triumph of the newly established People’s Republic of China. With U.S.-China relations at a new low, officials and propagandists are using the anniversary to remind Chinese people that the nation has stood up to the world’s superpower before — and prevailed.

A memorial museum dedicated to the conflict recently reopened in Dandong, a Chinese city across the Yalu River from North Korea. A series of films about the war is also rolling out — “to carry forward the great spirit of resisting U.S. aggression,” as the description of one documentary put it. 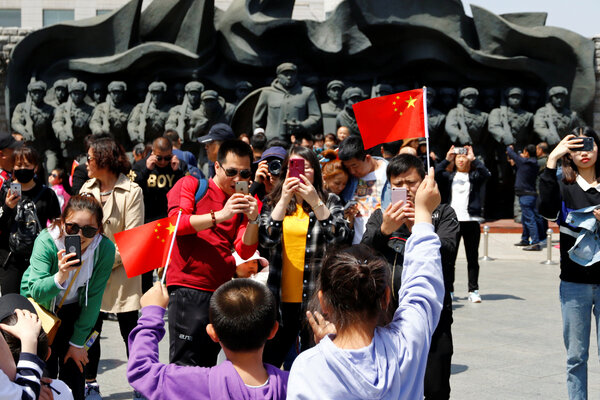 A new war drama stars Wu Jing, the lead actor in the “Wolf Warrior” action film franchise that has given a name to Chinese diplomacy of late. It tells the story of a combat engineering unit keeping a crucial bridge intact during one of the last battles of the Korean conflict.

“Never underestimate Chinese people’s determination to safeguard national security,” the editor of Global Times, Hu Xijin, wrote on Twitter last week, after a ceremony commemorating the return of the remains of Chinese soldiers who died in South Korea.

Mr. Hu, whose views are not official but echo those of the country’s hawks, has been regularly warning the United States that it risked starting a war with China. In his latest unsubstantiated claim, he warned that Mr. Trump could launch a drone attack on Chinese bases in the South China Sea.

As always, China’s Communist Party has the ability to dial up propaganda — and to dial it down — to suit its domestic and geopolitical goals.

China, for example, has been far less bellicose in its statements about India this summer, despite the lethal clashes along their border. With the United States, however, the tone has sharpened significantly as the Trump administration has moved almost daily to take on the Chinese — from closing the Chinese Consulate in Houston to banning TikTok and WeChat.

Chinese propaganda often uses martial language and images. The fight against the coronavirus was declared a People’s War. Mr. Xi, too, evokes the idea of a warlike struggle to overcome threats. Last month he listed five conditions that China would “never accept,” including any effort to divide or bully the Chinese people.

The flurry of videos released by the People’s Liberation Army, though, has left little doubt about its message. At least two have included the chorus “if war broke out today,” including one for the secretive submarine service — with details of equipment and geography blurred out. They have been viewed millions of times. 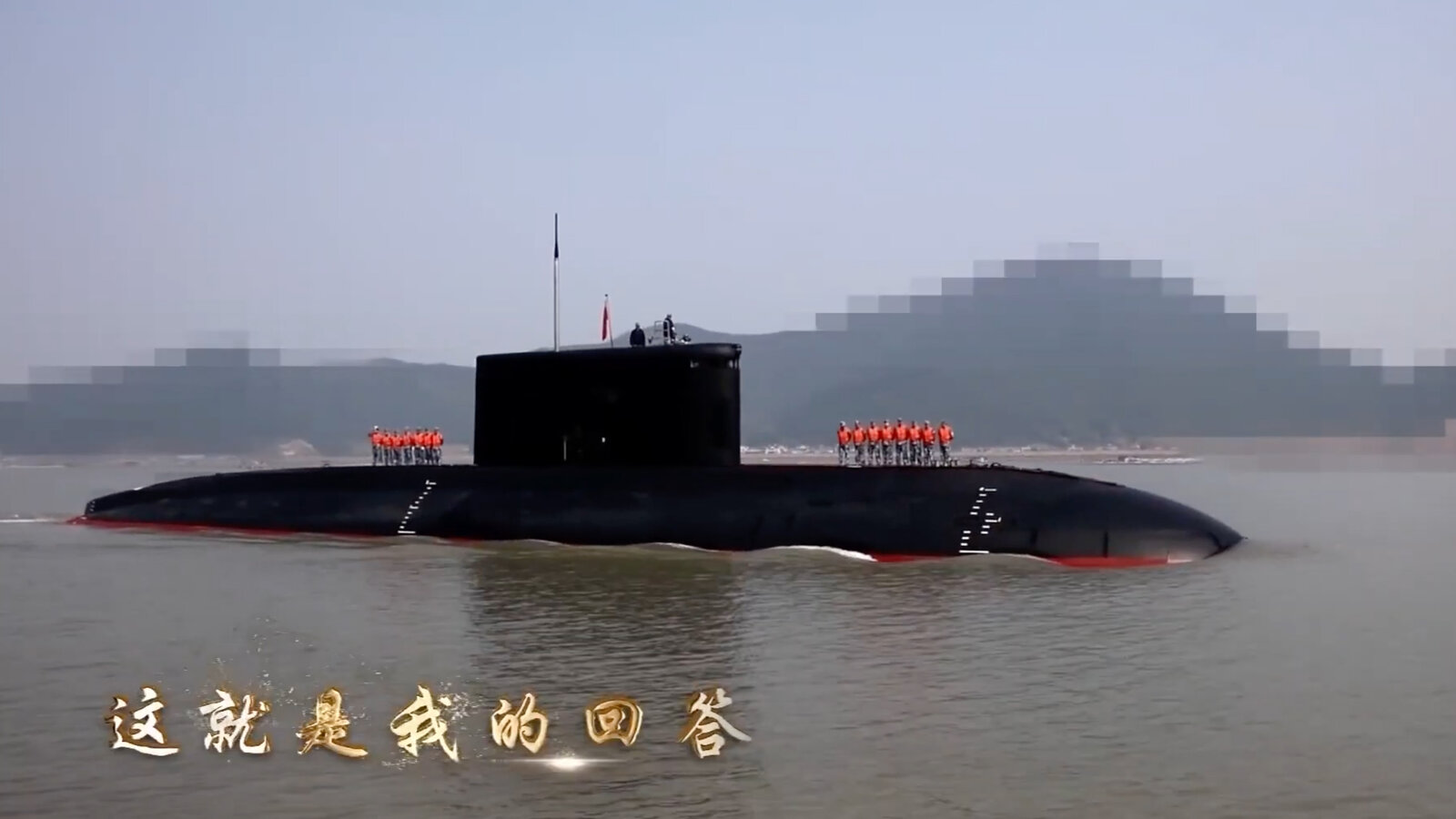 Another video was even more explicit. It featured a bombing run with an H6 strategic bomber, zeroing in on a satellite photograph of a runway at Anderson Air Force Base in Guam. After briefly going viral, the post was removed without explanation.

The new propaganda campaign has also emerged amid the increased military activity.

This summer, China and Taiwan each held annual training exercises that simulated attacks across the Taiwan Strait. In one video, released by China’s Eastern Theater Command, troops rehearsed a landing on a beach on Hainan, the island off China’s southern coast whose geography is similar to Taiwan’s.

Since then, China has repeatedly tested Taiwan’s defenses with air and sea patrols. Twice last month, squadrons of fighters and bombers crossed the unofficial median line over the Taiwan Strait, which both countries have largely observed for decades.

China’s tone boiled over with two visits by American officials, including one in August by Alex M. Azar II, the secretary of health and human services, who was the most senior official to visit since the United States recognized the People’s Republic of China in 1979.

Chinese officials repeatedly denounced American support for Taiwan, saying it nurtured pro-independence sentiment on the island. Beijing seems particularly alarmed by a renewed political debate in Washington about whether the United States should explicitly state its willingness to defend Taiwan from a military attack. The Global Times editorial suggested that a higher-level visit, by the secretary of state or defense, would give China reason to respond with force.

A harsher tone has spread not only in state media, but also among Chinese academics and analysts with government-linked think tanks who influence policy debates.

Zhu Songling, director of the Institute of Taiwan Studies at Beijing Union University, said in a telephone interview that the Trump administration was testing “China’s bottom line.” “The United States has been playing the Taiwan cards too often and with too much intensity,” he said.

An editorial by the Council for the Promotion of Peaceful National Unification recounted the wars in Korea, in India in 1962 and in Vietnam in 1979 to warn that China would not be intimidated. “The United States, India, and Vietnam have all experienced strategic misjudgments in their military contests with China, and they have paid irreparable prices,” it said.

Shen Dingli, a professor of international relations at Fudan University in Shanghai, argued in an article that the risks of conflict over the island were rising. He said, in a telephone interview, that China could deter Taiwan and the United States from underestimating its resolve by declaring its willingness to use force if pushed.

“The United States unfortunately may mislead Tsai Ing-wen to misjudge the strategic situation,” Professor Shen said. “In an extreme situation, every country has a right to shoot first.”

Others are pushing back against escalatory rhetoric, warning that it could become a self-fulfilling prophecy.

“The ‘wolf warrior spirit’ is contrary to Chinese traditional culture,” Yuan Nansheng, a former Chinese diplomat who is now with the China Institute of International Studies, wrote in a paper published in late September. “If it entraps public opinion, the consequences will be worrisome.”