China sent 18 fighter jets and bombers into the Taiwan Strait on Friday in a robust show of force that a military official in Beijing said was a warning to Taiwan and the United States about their increasing political and military cooperation.

“Those who play with fire are bound to get burned,” Senior Col. Ren Guoqiang, a spokesman for the Chinese Ministry of National Defense, said at a briefing in Beijing, warning the United States and Taiwan against what he called “collusion.”

The aerial drill came as a senior American diplomat held a series of meetings in Taiwan ahead of a formal memorial service on Saturday for former President Lee Teng-hui, who led the island’s transition from military rule to democracy.

Taiwan, the self-governing democracy that Beijing claims as part of a unified China, has become an increasingly tense issue in the deteriorating relations between China and the United States. Both sides have stepped up military operations around Taiwan, while accusing the other of risking a potentially dangerous clash.

Previous flights probing Taiwan’s air defense zones have generally involved pairs of aircraft, not so many at once approaching from multiple directions. That suggested Friday’s flights were intended as an escalatory warning.

The Chinese aircraft, including two H-6 strategic bombers, crossed the median line between the mainland and Taiwan in the strait from four different directions, according to officials and news reports from both sides.

The planes crossed into Taiwan’s southwestern air identification zone before returning to the mainland, according to the Ministry of National Defense in Taiwan, which said that it had scrambled fighter jets and activated its air-defense missile systems to track the Chinese aircraft.

China had already dispatched two military aircraft toward Taiwan on Wednesday, the day the American diplomat, Keith Krach, the under secretary of state for economic, energy and environmental affairs, arrived. Mr. Krach’s visit followed another in July by Alex M. Azar II, the secretary of health and human services, who became the highest-level American cabinet member to visit Taiwan since 1979.

Mr. Krach was scheduled to meet Taiwan’s president, Tsai Ing-wen, at a dinner on Friday night.

Drew Thompson, a former Pentagon official overseeing China policy who is now a professor of public policy at the National University of Singapore, said that the latest flights were provocative, intended to send a political message ahead of Mr. Lee’s memorial service and to test Taiwan’s “ability to simultaneously track multiple sorties.”

Chinese officials have become increasingly alarmed by American efforts to bolster Taiwan’s political standing and its defenses. The Trump administration is pushing a sale of seven more packages of weapons, including drones, artillery batteries, sea mines and missiles able to strike ships or targets deep inside Chinese territory.

The heightened military action around Taiwan has fueled a divisive debate over Taiwan’s defense policy. Supporters of Ms. Tsai’s Democratic Progressive Party have called for efforts to bolster the island’s ability to defend itself, while others have warned that such moves could serve only to provoke the Chinese. 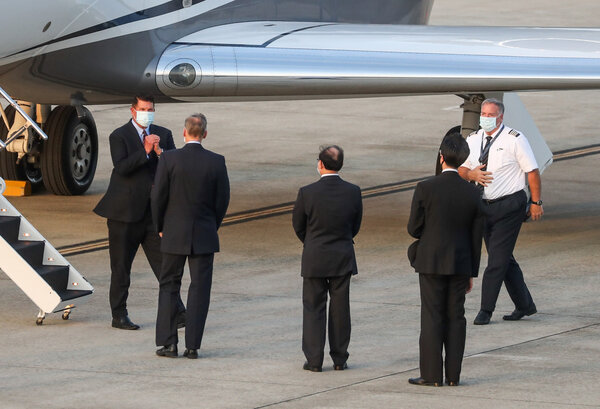 “Its move today is a protest and a warning to the United States and to Tsai,” Lin Yu-fang, a former legislator who is now a member of the National Policy Foundation, a think tank affiliated with Taiwan’s opposition party, the Kuomintang, said of the Chinese actions.

The Eastern Theater Command of the People’s Liberation Army of China said in a statement on Friday that the air and naval drills were intended to test the readiness of the military “to defend national unification and territorial sovereignty.” It was not clear how long the exercises would continue, though Colonel Ren, the spokesman, suggested that they would be held over some days.

Global Times, a hawkish newspaper controlled by the Chinese Communist Party, cited military experts as warning that the People’s Liberation Army could “turn the exercises into real action any time if Taiwan secessionists insist on their obduracy.”

With infection rates rising, the economy looking precarious and different parts of the UK taking their own paths, what options does the prime minister have…