The starting gun went off at 9 a.m. Two hours later, frigid winds along the 62-mile mountain trail had left runners shivering and blown a cameraman’s equipment over. By early afternoon, shepherds and other local residents had begun a small rescue effort after hearing that some contestants in the race might be in danger.

The situation was more ominous than they thought.

Dozens of the 172 elite runners had gone missing, blinded by wind and hailstones and lacking proper gear for the bitter cold that had descended on them. Still, officials didn’t cancel the race until another hour had passed, at 2 p.m. Twenty-one runners were later found dead.

The ultramarathon held on May 22 in Yellow River Stone Forest park, in Gansu Province in northeastern China, has been called one of the most tragic events in the history of long-distance running. Provincial officials have opened an investigation into what went wrong. On Wednesday, the national sports authorities suspended all ultramarathon and long-distance races in China. And some family members of those who died are quietly asking if officials squandered precious hours before trying to save lives.

The local officials who organized the race have provided few details about what happened and have yet to publish a list of the dead. China’s central government and its state-owned media have suggested that local officials put profits over safety. Many of the survivors and most of the relatives reached by The New York Times declined to be interviewed, citing concerns that they might be under surveillance by the local authorities.

Huang Yinbin, 28, was one of the runners who died. His heartbeat stopped at 2:02 p.m., two minutes after the race was officially called off, according to his sister, Huang Yinzhen, who retrieved his smart watch. When she traveled to Gansu with six other family members to collect her brother’s body, she said, she was followed by local officials, who worked to keep the victims’ families from speaking to each other.

“They just prevent us from contacting other family members or reporters, so they keep monitoring us,” Ms. Huang said.

She said officials had offered her family 950,000 renminbi (about $145,000) as a settlement, which they refused because they still want answers. The public affairs office for the city of Baiyin, which hosted the race, did not respond to multiple requests for comment. The city’s mayor, Zhang Xuchen, has apologized but said rescuers responded as quickly as they could, given the extreme weather conditions. 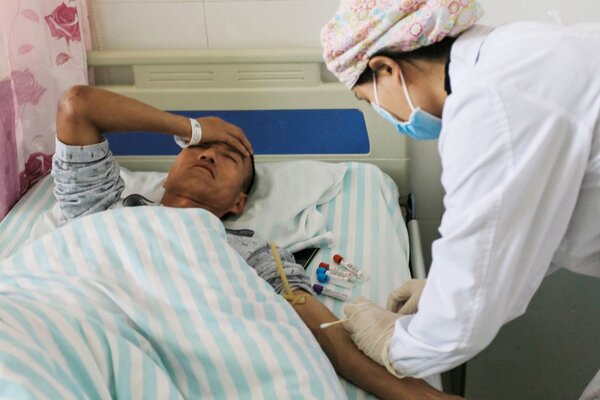 China’s marathon industry has ballooned in popularity in recent years. Organizers see the races as opportunities to draw tourists to some of the country’s poorest regions, like Gansu. Officials in the province began holding the Yellow River Stone Forest ultramarathon three years ago to attract adventure seekers to the park, where golden mountains and sharp stone pillars create a rugged and dramatic terrain.

Before May, the race had largely been considered a success. But the deaths have ignited debate over whether the sport has become too risky, particularly in remote areas where rescue missions can be difficult. China’s top leader, Xi Jinping, has called for a close examination of the industry. In the announcement suspending ultramarathons on Wednesday, the government said the casualties in Gansu had “taught the country a grave lesson.”

Even after the race was called off, many participants continued to run for hours, despite a barrage of desperate cries for help from others on WeChat, the Chinese messaging app, in a chat group that included organizers and runners.

“A few people have lost consciousness and are puking foam,” read one of the distress calls, according to Xinhua, China’s state-owned news agency.

Experts suggested that critical time was lost before an adequate rescue effort began, and they questioned the organizers’ decision to remove light jackets and long underwear from a list of mandatory gear. In previous years, the extra layers weren’t needed because of unusually warm weather, but some say that was no excuse.

“The weather always changes like this, but the organizers did not take the extremes into consideration in designing the pre-race education program and rescue plans,” said Xiaozhao Zhao, an ultramarathoner who has run in Yellow River Stone Forest. “Sluggish rescue at the start when the bad weather arrived, plus inadequate compulsory gear requirement to cope with coldness, together brought the disaster.”

One of the shepherds involved in the early rescue effort, Shang Lishan, said in an interview that he had skipped grazing his sheep on the day of the race because it was clear the weather would be too formidable. “I thought the race would be stopped because the weather was so cold that no one in the village went up the mountain,” he said.

Around 1 p.m., Mr. Shang received a message from a friend who thought some runners might be in danger, and he went up the mountain with dozens of other villagers to help. It wasn’t until 7 p.m. that the local authorities sent 1,200 people to look for the 33 runners who were still missing, according to Xinhua.

Mr. Shang and the others stayed on the mountain until morning, working with search and rescue teams. Only 12 of those 33 missing runners were found alive.

Just before Mr. Huang died, he apparently doubled over his tracks as if he were lost, according to the sister who obtained his smart watch. The family is hoping to find out if race officials have any insight into those last moments.

It’s a question that has also haunted Wen Rongbo, the father of Wen Jing, 25, another runner who died. Mr. Wen said he had retrieved his daughter’s smart watch and that her heart had stopped at 4:20 p.m., more than two hours after the race was halted. On Tuesday, he posted a picture of his daughter on WeChat.

“Dear families and Wen Jing’s friends: Xiaojing is buried and at rest,” his post read, referring to Ms. Wen by a nickname. “Thanks for your care for my daughter. I will take good care of her mother and will slowly come out of grief.” His daughter had gotten married just two weeks before the race.

It is unclear whether a full accounting of what happened will ever be published in China. In the absence of more information, many have tried to piece the truth together by relying on eyewitness accounts, photographs and videos.

Guo Jian, a cameraman whose equipment was blown over by wind on the morning of the race, kept filming for hours after the first call for help on WeChat was sent at 12:17 p.m. Like many of the runners, he was unaware that the race had been stopped until search and rescue workers began arriving after 7 p.m.

In video footage that Mr. Guo later posted online, he wonders out loud why China’s ultramarathon champion, Liang Jing, had not passed the fourth checkpoint by 2:30 p.m. It was just 24 miles from the starting line, and earlier in the day, Mr. Guo had filmed him running at the front. Mr. Liang had competed in dozens of these events, and it was unlike him to take so long.

He would never see him again. Rescuers later confirmed his death.

In all, only four runners had passed the fourth checkpoint by 4:42 p.m., less than 20 minutes before it was scheduled to close. At 8:40 p.m., Mr. Guo found a woman on the trail who was still running.

She later told state media how shocked she was to learn from Mr. Guo that the race had been canceled. She had even sat down for a quick bowl of lamb and noodles at the fourth checkpoint as volunteers cheered her on, she said.

“No one told me that there were runners waiting to be rescued,” she said.