The warning on Friday came after the US Senate unanimously approved the Hong Kong Autonomy Act, sending it to the White House for President Donald Trump’s signature.

“If the US side is bent on going down the wrong path, China will resolutely respond with all necessary countermeasures.”

Beijing has faced a groundswell of criticism over its decision to impose a law outlawing “acts of subversion, secession, terrorism and colluding with foreign forces” in Hong Kong. Pro-democracy protesters in the city as well as foreign governments say the law breaches the “one country, two systems” principle enshrined in the 1984 Sino-British treaty that guaranteed the autonomy of Hong Kong.

The law has triggered alarm among democracy activists and rights groups. Demosisto, a pro-democracy group led by Hong Kong activist Joshua Wong, disbanded hours after the legislation was passed, while prominent group member Nathan Law said on Friday that he had left the global financial hub.

The 26-year-old said he made the decision to leave after criticising the new law at a US congressional hearing he attended via livestream on Wednesday. “Of course, I knew my speech and appearance would put my own safety in serious jeopardy given the circumstances,” he wrote on Twitter.

“As a global-facing activist, the choice I have are stark: to stay silent from now on, or to keep engaging in private diplomacy so I can warn the world of the threat of Chinese authoritarian expansion. I made the decision when I agreed to testify before the US Congress.”

Al Jazeera’s Sarah Clarke, reporting from Hong Kong, said Law did not close his whereabouts for security reasons and is “just one among a number of political figures who’ve fled as a result of the national security law”.

“Joshua Wong and prominent Demosisto member Agnes Chow – we do not know where they are at the moment. We think they must be in the city as they face criminal charges and are not allowed to leave as a result.”

Wong and Chow face charges of taking part in an unlawful assembly in August last year, during mass protests against a now-withdrawn extradition bill with mainland China. It was those demonstrations – which lasted for months and at times descended into violence – that prompted Beijing’s move to impose the security law. 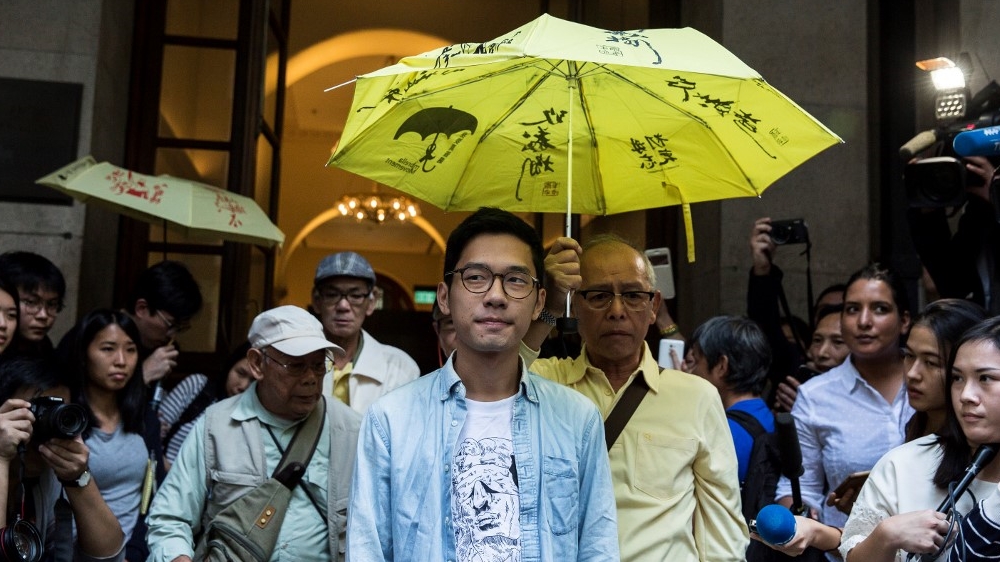 Officials in Beijing and Hong Kong say the law, which bypasses Hong Kong’s legislature, is necessary to restore order and stability in the city and will only target a handful of “trouble-makers”.

Meanwhile, Hong Kong’s local government confirmed that a popular protest slogan used over the last year – “Liberate Hong Kong, revolution of our times” – was now illegal. The rallying cry appears on placards at rallies, is printed on clothes and accessories and scribbled on post-it notes on walls across the city.

“The slogan ‘Liberate Hong Kong, the revolution of our times’ nowadays connotes “Hong Kong independence”, or separating the Hong Kong Special Administrative Region (HKSAR) from the People’s Republic of China, altering the legal status of the HKSAR, or subverting the state power,” the government said in a statement late on Thursday.

On Wednesday, the 23rd anniversary of the former British colony’s handover to Chinese rule, police arrested about 370 people during protests against the legislation, with 10 of those involving violations of the new law

The United Kingdom has announced plans to allow millions of Hong Kong citizens with British National Overseas status to relocate with their families and eventually apply for citizenship. Australia said it was considering similar action, while Taiwan has opened an office to help Hong Kong people wanting to flee the city.