China’s Communist Party emerged from four days of meetings behind closed doors in Beijing declaring the country’s leader, Xi Jinping, a “helmsman” who would lead “the ship of socialism sailing into the wind and waves with determination.”

At a time when other world leaders remain consumed by the coronavirus pandemic, China promised an economic revival, greater technological self-reliance and a stronger military to protect the country’s economic and political interests.

The meeting underscored Mr. Xi’s seemingly boundless political control, as well as his ambitions to propel China out of the current crisis into a new phase of growth, less vulnerable to external risks. Here are the main outcomes from the meeting, which outlined policy priorities for the coming years. 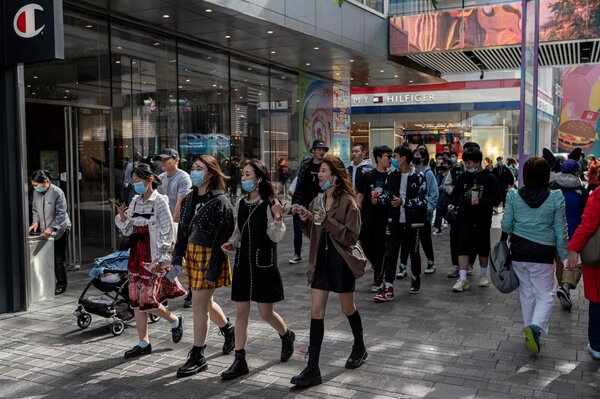 After the shock from the coronavirus crisis of the first months of this year, China’s economy returned to 4.9 percent growth in the July-to-September quarter, and exports have revived strongly.

In its five-year plan, China aims to expand domestic markets and encourage innovation across the economy — from cutting-edge technology to more efficient farming — the party leaders said in an official summary of their meeting. That summary did not offer specific growth projections from 2021.

But be patient: Precedent suggests that the government will issue a more detailed “explanation” of the proposed plan in the next few days.

“The economy is improving in the long term,” the Central Committee said, “there is broad social stability, and there are advantageous conditions on many fronts for continued development.”

Since the Trump administration began restricting China’s access to American technology, Mr. Xi has stepped up calls for China to achieve “self-sufficiency” for crucial components.

The meeting of the party’s Central Committee declared that China would make enhanced technological self-reliance a priority over the next 15 years. “Insist on the core status of innovation across all of our national modernization,” the leaders said. “Make technological self-sufficiency a strategic pillar of national development.”

Just what that entails for tech policy will probably not become clear until the full five-year plan is released next year, and Chinese ministries and policy agencies issue their detailed follow-on plans for tech sectors.

Mastering the design and production of silicon chips and other parts can be expensive and risk-filled, and industry experts have questioned how far and how quickly China could successfully decouple itself from global suppliers.

“I think a lot of what China is trying to do is to throw a lot of resources — financial resources, human resources — at clearly identified problems,” said Andrew Batson, the China research director for Gavekal Dragonomics, an independent research firm. “A lot of the priorities involve scaling up of existing technologies domestically.”

Cleaner growth — but no date for emissions peak

China’s five-year plan is about more than economic growth, especially these days when public anger with air, water and soil pollution corrodes confidence in the government. China also faces international pressure to curb its emissions of the greenhouse gases that increase global warming, which have surged past those of other countries for over a decade.

Mr. Xi announced in a speech to the United Nations last month that China aimed to reach a peak in carbon dioxide emissions before 2030 and would achieve “carbon neutrality” by 2060, meaning that it will no longer be a net emitter of the main greenhouse gas from human activity. Chinese scientists have argued that a peak in emissions could be possible by 2025.

The broad summary of China’s five-year goals released on Thursday did not set a year for a peak in emissions, but it said that after China peaks, it will see “steady declines in carbon emissions.”

The Central Committee declared that China’s military — one of Mr. Xi’s core priorities since taking office in 2012 — had improved greatly, even as it promised to make still more “major steps” to enhance the country’s security.

The committee did not detail any new programs but called for “comprehensively strengthening military training and preparedness.” Mr. Xi has returned to the theme repeatedly in recent appearances with the People’s Liberation Army, as military tensions have risen from the Himalayas to Taiwan and the South China Sea.

The committee also called for closer civilian-military cohesion — under the ultimate authority of the Communist Party, of course. “It is necessary to strengthen the national security system and capacity building to ensure national economic security, guarantee the safety of people’s lives, and maintain social stability and security,” it said.

Why a five-year plan?

Nearly 70 years after Mao Zedong launched China’s first Five-Year Plan in 1953, these plans remain an important blueprint that Chinese leaders use to set out aspirations for economic, social and — these days — environmental progress.

As China has grown increasingly commercial, the plans have grown less important to some parts of the economy. Still, they help set priorities, especially in areas like energy policy and big infrastructure projects where the state dominates investments.

Mr. Xi has shown how important these plans are to him by taking over the drafting process, a job traditionally left to the premier. Earlier this month, the party released rules that tighten Mr. Xi’s power to set the policy agenda. The rules appeared designed to prevent dissension over issues like the direction of the economy, said Holly Snape, a postdoctoral fellow at the University of Glasgow who studies Chinese politics.

“This goes right to the heart of how the next five years will pan out,” she said by email.

The Central Committee meeting also discussed China’s goals for modernization by 2035. Some analysts have interpreted that date as a sign of how long Mr. Xi intends to remain in power, having removed the limits on his terms as top leader.

Ms. Snape noted, however, that such long-term goals are not unprecedented: party officials approved a long-term plan in 1995, when Jiang Zemin was in charge, setting goals up to 2010. Mr. Jiang stepped down from his last formal post in 2004.

Meetings like the ones this week are not a time when leaders typically issue detailed pronouncements on international affairs. So it was no surprise that the leaders did not comment on the United States election or other topics beyond China’s borders.

Still, the plans depend on their assessment of the international outlook, which they summed up in opaque phrases. The latest emphasized the risks from rising uncertainty, echoing Mr. Xi’s recent warnings that “the world has entered a period of turbulence and transformation.”

“Currently the world is experiencing a major transformation of the kind not seen for a century,” the Central Committee said. “The balance of international forces is undergoing profound adjustment.”

It warned: “Instability and uncertainty have clearly increased.”