Five years ago, Luo Huazhong discovered that he enjoyed doing nothing. He quit his job as a factory worker in China, biked 1,300 miles from Sichuan Province to Tibet and decided he could get by on odd jobs and $60 a month from his savings. He called his new lifestyle “lying flat.”

“I have been chilling,” Mr. Luo, 31, wrote in a blog post in April, describing his way of life. “I don’t feel like there’s anything wrong.”

He titled his post “Lying Flat Is Justice,” attaching a photo of himself lying on his bed in a dark room with the curtains drawn. Before long, the post was being celebrated by Chinese millennials as an anti-consumerist manifesto. “Lying flat” went viral and has since become a broader statement about Chinese society.

A generation ago, the route to success in China was to work hard, get married and have children. The country’s authoritarianism was seen as a fair trade-off as millions were lifted out of poverty. But with employees working longer hours and housing prices rising faster than incomes, many young Chinese fear they will be the first generation not to do better than their parents.

They are now defying the country’s long-held prosperity narrative by refusing to participate in it.

Mr. Luo’s blog post was removed by censors, who saw it as affront to Beijing’s economic ambitions. Mentions of “lying flat” — tangping, as it’s known in Mandarin — are heavily restricted on the Chinese internet. An official counternarrative has also emerged, encouraging young people to work hard for the sake of the country’s future.

“After working for so long, I just felt numb, like a machine,” Mr. Luo said in an interview. “And so I resigned.” 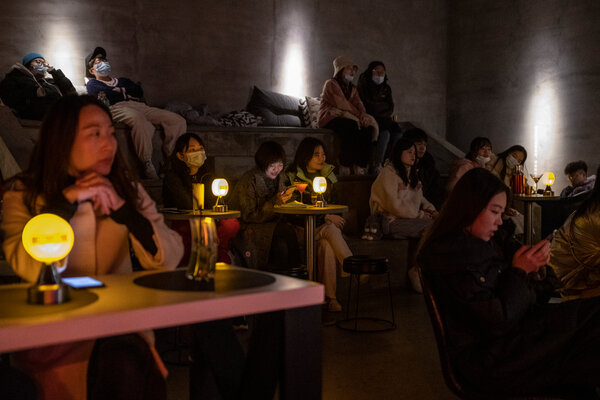 To lie flat means to forgo marriage, not have children, stay unemployed and eschew material wants such as a house or a car. It is the opposite of what China’s leaders have asked of their people. But that didn’t bother Leon Ding.

Mr. Ding, 22, has been lying flat for almost three months and thinks of the act as “silent resistance.” He dropped out of a university in his final year in March because he didn’t like the computer science major his parents had chosen for him.

After leaving school, Mr. Ding used his savings to rent a room in Shenzhen. He tried to find a regular office job but realized that most positions required him to work long hours. “I want a stable job that allows me to have my own time to relax, but where can I find it?” he said.

Mr. Ding thinks young people should work hard for what they love, but not “996” — 9 a.m. to 9 p.m., six days a week — as many employers in China expect. Frustrated with the job search, he decided that “lying flat” was the way to go.

“To be honest, it feels really comfortable,” he said. “I don’t want to be too hard on myself.”

To make ends meet, Mr. Ding gets paid to play video games and has minimized his spending by doing things like cutting out his favorite bubble tea. Asked about his long-term plans, he said: “Come back and ask me in six months. I only plan for six months.”

While plenty of Chinese millennials continue to adhere to the country’s traditional work ethic, “lying flat” reflects both a nascent counterculture movement and a backlash against China’s hypercompetitive work environment.

Xiang Biao, a professor of social anthropology at Oxford University who focuses on Chinese society, called tangping culture a turning point for China. “Young people feel a kind of pressure that they cannot explain and they feel that promises were broken,” he said. “People realize that material betterment is no longer the single most important source of meaning in life.”

The ruling Communist Party, wary of any form of social instability, has targeted the “lying flat” idea as a threat to stability in China. Censors have deleted a tangping group with more than 9,000 members on Douban, a popular internet forum. The authorities also barred posts on another tangping forum with more than 200,000 members.

In May, China’s internet regulator ordered online platforms to “strictly restrict” new posts on tangping, according to a directive obtained by The New York Times. A second directive required e-commerce platforms to stop selling clothes, phone cases and other merchandise branded with “tangping.”

The state news media has called tangping “shameful,” and a newspaper warned against “lying flat before getting rich.” Yu Minhong, a prominent billionaire, urged young people not to lie down, because “otherwise who can we rely on for the future of our country?”

Mr. Luo decided to write about tangping after he saw people heatedly discussing China’s latest census results in April and calls for the country to address a looming demographic crisis by having more babies.

He described his original “lying flat” blog post as “an inner monologue from a man living at the bottom of the society.”

“Those people who say lying down is shameful are shameless,” he said. “I have the right to choose a slow lifestyle. I didn’t do anything destructive to society. Do we have to work 12 hours a day in a sweatshop, and is that justice?”

Mr. Luo was born in rural Jiande County, in eastern Zhejiang Province. In 2007, he dropped out of a vocational high school and started working in factories. One job involved working 12-hour shifts at a tire factory. By the end of the day, he had blisters all over his feet, he said.

In 2014, he found a job as a product inspector in a factory but didn’t like it. He quit after two years and took on the occasional acting gig to make ends meet. (In 2018, he played a corpse in a Chinese movie by, of course, lying flat.)

Today, he lives with his family and spends his days reading philosophy and news and working out. He said it was an ideal lifestyle, allowing him to live minimally and “think and express freely.” He encourages his followers, who call him “the Master of Lying Down,” to do the same.

After hearing about Mr. Luo’s tangping post on a Chinese podcast, Zhang Xinmin, 36, was inspired to write a song about it.

Mr. Zhang, a musician based in Wuhan, had quit his job in advertising five years ago to pursue his music, and the idea of lying flat resonated with him. He called his song “Tangping Is the Right Way.”

Mr. Zhang uploaded the song to his social media platforms on June 3, and within a day censors had deleted it from three websites. He was furious.

“Nowadays, only running forward is allowed, but not lying down,” he said. “It doesn’t make sense to me that they deleted this song.”

He eventually uploaded the song as a video on YouTube, which is blocked in China. The video shows him lying down on his sofa, casually strumming his guitar as he sings in a breezy voice: