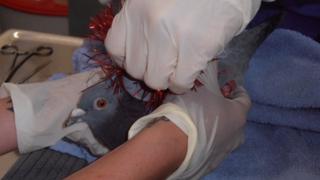 Dozens of birds have been found dead or injured in New Zealand with Christmas decorations tied around their necks and wings.

Sparrows and pigeons have been reported with “decorative trinkets” tied to them in Wellington.

Some of them died of starvation as they are unable to fly and find food, according to the SPCA.

Although there have been similar incidents since 2015, there has been a spike in sightings in recent weeks.

Authorities believe the birds are being deliberately “decorated” as the tinsel and bows are tightly and carefully attached, the New Zealand Herald reported.

“Many try to pry the foreign objects off their bodies with their beaks and feet, becoming further entangled and preventing them from eating, drinking and flying. With others, the decorations are wrapped so tightly it completely cuts off their blood circulation.

“Those that do survive and arrive at our centre are always in a very bad state, and are so malnourished and distressed that we have had to humanely euthanise them,” SPCA spokesperson Paige Janssen said in an email to the BBC.

According to Ms Janssen, there have been several reported cases of “decorated” birds since 2015. However the number of sightings has increased over the Christmas and New Year period.

“We received around 30 calls alone just over this period. They were multiple sightings of a dozen birds that are still mobile and flying around the Kilbirnie area that we are unable to reach,” she said.

SPCA Wellington is looking for the suspect behind this “case of cruelty” and last week put out a plea to the public to come forward with any information.

In a breakthrough on Tuesday, the group rescued seven “decorated” pigeons from a property in the eastern suburb of Kilbirnie in Wellington. But SPCA is continuing their investigation and is still encouraging members of the public to come forward with any information.

The pigeons were found to have been in a “distressed but healthy condition”.

Some of the rescued pigeons were also painted the same colour as the tinsel tied around them.

“One pigeon had quite bright red Christmas tinsel wrapped around its wings and then the top of its head had been painted with red paint as well as its wings had been tipped with red paint,” the New Zealand Herald quoted SPCA regional manager for the central region Ros Alsford as saying.