SINGAPORE – He had sought drugs on encrypted messaging apps like Telegram, which promised anonymity and security, and the windows at the back of his flat in Bukit Batok were darkened to hide his activities.

But like the 49 others arrested in a two-week-long islandwide operation, officers from the Central Narcotics Bureau (CNB) knew about the suspect.

In a pre-dawn raid on Nov 16, they entered his home.

In his room, officers found drug paraphernalia and crystal-like substances in plastic sachets. The items were photographed, logged and seized.

While the suspect, who looked to be in his 30s, was being questioned, his parents sat quietly in the living room. They were shocked.

Before he was taken away, the suspect’s father told his son in Hokkien: “It’s okay. If you have done wrong, you have to pay.”

CNB had allowed journalists, including from The Straits Times, to accompany officers on raids that targeted suspects who procured drugs on messaging apps that included WeChat.

Superintendent Aaron Tang, director of the bureau’s intelligence division, said: “These offenders may think that such applications can offer them a certain level of anonymity to allow them to carry out their illegal activities, and they can avoid CNB’s surveillance.

“But they cannot be more wrong.”

The drug busters had arrested 77 traffickers linked to Telegram transactions between January 2019 and Sept 17 this year.

Five of them were known to be operators of Telegram drug channels, which are often large enough that they advertise in Telegram groups.

During that period, CNB also nabbed 154 drug abusers linked to Telegram transactions, with 71 per cent of those arrested below the age of 30. 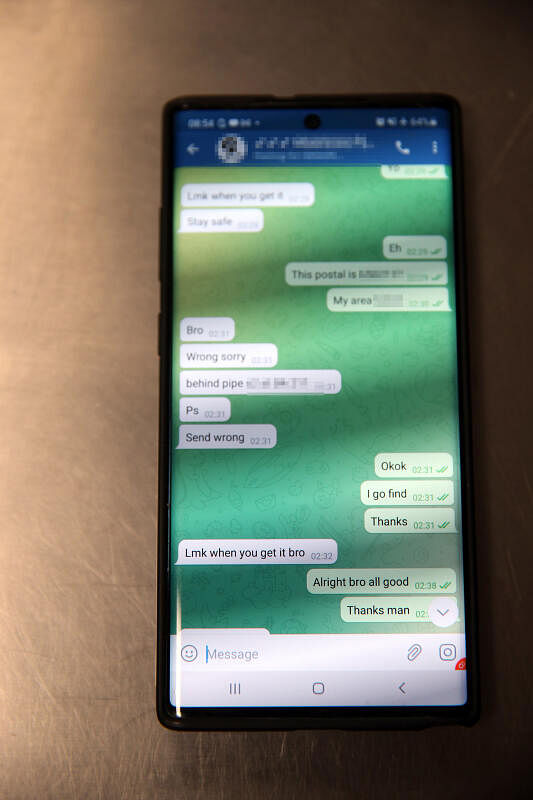 Drugs seized included 487g of heroin, more than 14kg of methamphetamine or “Ice”, 7kg of cannabis, 527 LSD stamps and other chemicals including cannabis edibles, ketamine, Ecstasy and Erimin-5 tablets.

Said Supt Tang of the syndicates operating on messaging apps: “We know their modus operandi, and will continue to be tenacious in following up on all such leads by carefully gathering intelligence and launching well-timed operations to take these offenders out.

“Regardless of the platform or tactics used in an attempt to evade detection, there is no safe haven for drug offenders in Singapore.”

CNB has been monitoring and acting on syndicates tapping messaging apps since 2019. It knew that some drug traffickers would switch between Telegram chat groups and channels periodically to avoid detection.

The traffickers would also use bank transfers before delivering the drugs to drop-off points to avoid physical contact between the trafficker and buyer, said the bureau.

The drugs are sometimes tucked behind pipes in housing board estates, CNB learnt from screen grabs of Telegram chats.

But the pandemic saw drug trafficking syndicates changing their operating models to continue the trade.

The Covid-19 measures last year kept most people at home.

So the drug syndicates delivered the drugs to customers and flooded Telegram with hundreds of weekly advertisements.

The syndicates’ reach is significant. In the two-week-long operation, CNB seized close to $20,400 in drugs from users who had tapped messaging apps for their supply.

In a raid on Nov 16 targeting a user in Jurong, CNB officers did not find any drugs in the suspect’s home.

But the man, who looked to be in his 20s, led them to his car where they found a pouch that contained four glass pipes and a crystal-like substance.

The suspect, who was handcuffed and flanked by two CNB officers when his car was searched, was quiet. His father stood a short distance away to observe the proceedings.

ST accompanied the officers back to the CNB enforcement unit at Jurong Police Division where the suspects’ urine and hair samples were collected for testing.

Samples were also sent to the Health Sciences Authority for further testing.

Under the law, a person can face a maximum of 10 years’ imprisonment or $20,000 fine, or both if he is found guilty of drug possession or consumption.