JAKARTA, Indonesia — A brand new Boeing Max 8 jet that crashed into the Java Sea last week had problems with its airspeed indicator during its final four flights, Indonesian investigators said on Monday.

Analyzing the contents of a flight data recorder that was recovered from the seabed on Thursday, members of Indonesia’s National Transportation Safety Committee, which is leading the investigation into the crash of Lion Air Flight 610, found that inaccurate airspeed readings continued for three days, despite the plane having been repeatedly cleared for takeoff.

The Max 8, the latest model of Boeing’s workhorse 737, entered commercial fleets only last year. The plane that crashed a week ago was delivered to Lion Air, one of the world’s fastest-growing low-cost carriers, in August.

“We think this is an issue that is important because there are more than 200 Max planes around the world,” said Capt. Nurcahyo Utomo, the transportation safety committee’s lead accident investigator.

While there have been no indications that the Max 8 has a systemic problem with airspeed readings, the model’s newness means any potential problem may not yet have manifested itself in other carriers’ fleets.

Beyond a potential hardware problem — whether with computerized sensors or with instruments that measure airspeed — investigators are also looking at how the plane was repeatedly approved for flights when it had experienced a consistent problem.

“We will investigate further what caused the damage and what repair had been done,” Captain Nurcahyo said.

Lion Air has a troubling record of at least 15 major safety lapses, but until last week the carrier, Indonesia’s largest, had not had a fatal incident since 2004. The Indonesian Transportation Ministry is conducting a special audit into the low-cost airline’s operations and safety standards. 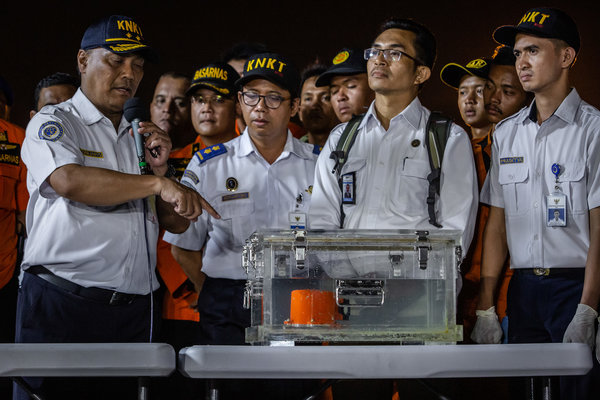 It is not clear whether unreliable airspeed readings caused the crash of Lion Air Flight 610. But inconsistent airspeed readings can feed incorrect data to automated systems, complicating takeoffs and bewildering flight crews, especially when the plane is flying over water, where it is harder to gauge how fast a jet is going by looking out the window.

While pilots should receive multiple airspeed readings from probes, known as pitot tubes, mounted to the outside of the plane, they must figure out which reading is wrong and adjust accordingly.

Previous crashes, like that of Air France Flight 447 in 2009 over the Atlantic Ocean, have been traced to an initial problem with incorrect airspeed readings catalyzing a fatal chain of events exacerbated by pilot confusion.

Lion Air Flight 610 took off from Jakarta, the Indonesian capital, on Oct. 29, bound for the small city of Pangkal Pinang. Less than 15 minutes later, after an erratic, up-and-down flight path, the Max 8 plummeted into the sea with 189 people on board.

The plane hit the water so fast that it fragmented, investigators said. Divers have found no intact bodies.

By examining the maintenance log of the plane’s penultimate flight from the day before the crash, aviation experts had already discovered that the single-aisle jet had problems with unreliable airspeed readings.

But confirmation of exactly what precipitated last week’s crash will come only with the further inspection of the so-called black boxes, the devices that record a plane’s movements and data. The flight data recorder that was recovered last Thursday measured the plane’s speed, altitude, temperature, flight control and cockpit steering, among other indicators.

Soerjanto Tjahjojo, the chief of the transportation safety committee, said on Monday that the device contained 69 hours of information from 19 flights. Nearly 1,800 parameters were recorded in the black box, he said.

A second black box, which recorded cockpit conversations, has not yet been found, but Indonesian Navy divers have heard faint pings emanating from an underwater beacon attached to the flight recorder.