OSAKA, Japan — The soccer player’s plane was at the gate. Ahead of him stood his last chance at safety.

The athlete, Ko Pyae Lyan Aung, had come to Japan with Myanmar’s national team. On the field, before the first match, he had flashed a gesture of defiance — the three-finger salute made famous by “The Hunger Games” — against the military junta that had ousted his country’s elected government. He was now afraid of what might happen if he returned home.

Several times, he had tried to break away from the team and claim asylum, and each time he had been caught. The immigration line at the Osaka airport offered one more opportunity. When an agent waved him forward and asked for his passport, he presented his phone instead. On it was a message in English and Japanese: “I don’t want to go back to Myanmar.”

The gambit worked. He can stay, at least for now. But while Mr. Pyae Lyan Aung’s case has riveted Japan and put pressure on the government, his fate may ultimately hinge on two of the most politically sensitive issues in the country today: its hostile immigration system and its response to the Myanmar coup.

Few countries are less hospitable to refugees than Japan, which settled just 47 asylum seekers last year, less than 1 percent of applicants. In recent months, the immigration system has become a political battlefield after the death of an emaciated Sri Lankan migrant in a detention cell.

At the same time, the government has been under intense pressure at home and abroad to do more to dissuade Myanmar’s military as it has ruthlessly crushed protests against its Feb. 1 coup. But Japan, which has been a top investor in Myanmar and generally avoids rights issues overseas, has been reluctant to make any moves that might alienate the junta, parting ways with allies like the United States that have imposed sanctions. 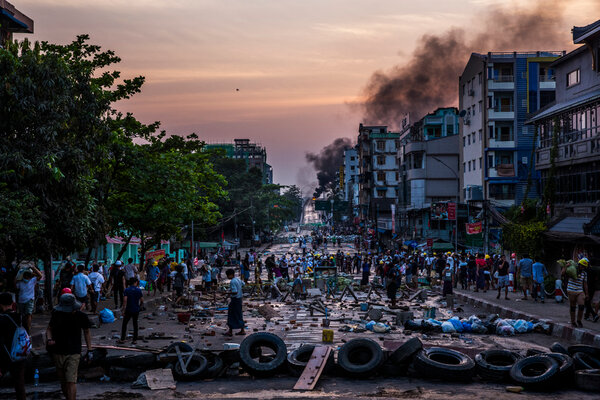 Mr. Pyae Lyan Aung’s case is likely to raise more questions about Japan’s stance. A growing number of athletes from Myanmar have refused to represent the country at international sporting events, arguing that to do so would risk legitimizing the military leaders. Myanmar’s participation this month in the Tokyo Olympics could become another flash point.

So far, Mr. Pyae Lyan Aung has kept mostly quiet about politics, and his journey through the immigration system — in contrast to the experience of so many refugees in Japan — has been smooth. In May, the country announced emergency measures allowing citizens of Myanmar who wish to stay in Japan to apply for provisional visas. On June 22, Mr. Pyae Lyan Aung did so.

That day, reporters amassed outside the Osaka immigration bureau, a gray filing cabinet of a building in a weedy corner of the city’s port, where he had gone to submit his official asylum request.

He had recently learned that soccer players he knew in Myanmar had been killed while protesting, his lawyer said, adding that the new information would make Mr. Pyae Lyan Aung’s plea more compelling.

As reporters shouted questions, a tattoo of a giant eye peered out from the crook of Mr. Pyae Lyan Aung’s elbow, unblinkingly surveying the scene.

After an interpreter began to relay his responses, another foreign man suddenly appeared in the doors of the immigration center, screaming “Save me!” in Japanese. He sprinted down the street, and officials, lanyards swinging from their necks, puffed out of the building in close pursuit.

Days before, just blocks from where Mr. Pyae Lyan Aung now stood, he had been the immigrant trying to flee.

He would rather have made headlines for blocking kicks during his team’s World Cup qualifier against Japan, he said during an interview in the narrow Osaka rowhouse where he now lives. But Myanmar lost, 10-0, and his defiant gesture made news instead.

In the lead-up to the Japan trip, soccer players from Myanmar had begun openly expressing resistance to the regime. One grabbed international attention during a match in Malaysia when he celebrated a goal with his own three-finger salute.

Ten players later declared that they would not play for the national team. That followed a decision by a Myanmar swimmer based in Australia to boycott the Olympics and call on the organizers to bar the Myanmar Olympic Committee. (The organizers said they had to stay out of politics.)

The soccer players’ walkout delayed the trip to Japan, and Myanmar’s embarrassed national soccer association pressured the rest of the athletes to travel.

Before he left, Mr. Pyae Lyan Aung decided to make a statement. He was frustrated and heartsick about the situation at home, he said, and felt betrayed when the Myanmar soccer association did not distance itself from the junta.

His moment came when his team lined up for the national anthem before its game against Japan’s national team, known as Samurai Blue.

As news coverage of his defiant gesture snowballed, supporters became concerned about his safety. They reached out to U Aung Myat Win, an activist and restaurateur who fled from Myanmar to Japan in the 1990s. After years of being detained in the Japanese immigration system, Mr. Aung Myat Win had become one of the few refugees to receive asylum in the country.

Over the years, he had gone to extraordinary lengths to help other immigrants from Myanmar navigate life in Japan. He messaged Mr. Pyae Lyan Aung, arguing that going back home could be deadly, and asked him whether he wanted to stay in Japan.

At first the athlete wasn’t sure. But before long he had decided to try.

His team was under close watch. Its management was keeping tabs on the players, and Japan’s soccer federation had hired a private security firm to ensure that the men didn’t break quarantine.

Mr. Aung Myat Win scouted possible routes for Mr. Pyae Lyan Aung to slip out of his Osaka hotel. He would have to sneak past his teammates and down a central bank of elevators or emergency stairs.

It proved too difficult. After several failed attempts, Mr. Aung Myat Win contacted an immigration lawyer specializing in asylum cases, Yoshihiro Sorano, who filed a complaint with the police saying that Mr. Pyae Lyan Aung was being held captive.

Officers contacted the Japan Football Association, which assured them that the athlete was free to move around. The officers never spoke to him or visited the hotel, Mr. Sorano said.

Asked about the situation, the group said that because of the government’s Covid-19 restrictions, it had hired private security to monitor all foreign teams in Japan, as well as Japanese players who had come into contact with them. It said it had not been able to confirm whether there were additional restrictions on Mr. Pyae Lyan Aung’s movement.

Mr. Aung Myat Win and Mr. Sorano kept trying to make escape plans, but journalists had begun gathering outside the hotel, and the attention soon made it impossible.

Before long, Mr. Pyae Lyan Aung and the other players were on a bus to the airport. Mr. Aung Myat Win followed.

“When you get to immigration, tell them, ‘I don’t want to go home,’” he told Mr. Pyae Lyan Aung, who speaks little English and no Japanese. A supporter texted him the message in both languages to show the agent.

Now that his asylum application has been filed, Mr. Pyae Lyan Aung is unsure what’s next. He has no job, has no Japanese language skills and is unlikely to get support from the government. He hopes to keep playing soccer professionally, he said, but if that doesn’t work out, he will do what he must to stay in Japan.

All he knows for sure is that — for now at least — he can’t go home.