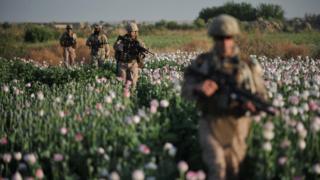 US air strikes on alleged Taliban drug labs in western Afghanistan killed at least 30 civilians, including children, according to the United Nations.

The UN said it had credible reports of a further 30 deaths in the May strikes but had not verified them.

The US said it had targeted Taliban-run methamphetamine labs which helped fund the militant group.

But according to the UN, drug labs and associated workers cannot lawfully be designated as targets.

US forces hit more than 60 alleged drug production sites in Farah Province and neighbouring Nimroz Province in the strikes on 5 May.

A UN delegation that visited the site of the attacks and conducted face-to-face interviews with residents concluded that there were 39 verified casualties – including 14 children – of whom 30 died.

The UN said it had also found credible evidence of at least 30 more deaths, the majority of whom it said were women and children.

According to the UN report, the sites were not exclusively run by Taliban but also by ordinary criminal networks as well – making them illegitimate targets for military strikes.

“While some of the sites may have been associated with illicit activity, they did not meet the definition of legitimate military objectives under international law,” the report concluded.

Workers at the alleged labs “were not performing combat functions”, it said, and “were therefore entitled to protection from attack”.

A spokesman for the US forces in Afghanistan (USFOR-A) denied that the strikes had caused any civilian casualties, insisting that the US had conducted “precision” strikes on what it knew to be Taliban methamphetamine labs.

“In addition to imagery collection during the precision strikes, USFOR-A conducted exhaustive assessments of the facilities and surrounding areas after the strikes,” the spokesman said.

The US spent much of the war attempting to destroy Afghanistan’s opium trade – spending as much as $1.5m (£1.15m) a day between 2001 and 2018 targeting poppy fields and associated production facilities.

But according to research carried out by the London School of Economics, the multimillion-dollar campaign had a negligible effect on the Taliban’s heroin operation. The lead researcher, Dr David Mansfield, told the BBC in April that the US poured millions of dollars into bombing little more than improvised labs in mud huts which could be immediately reconstructed.