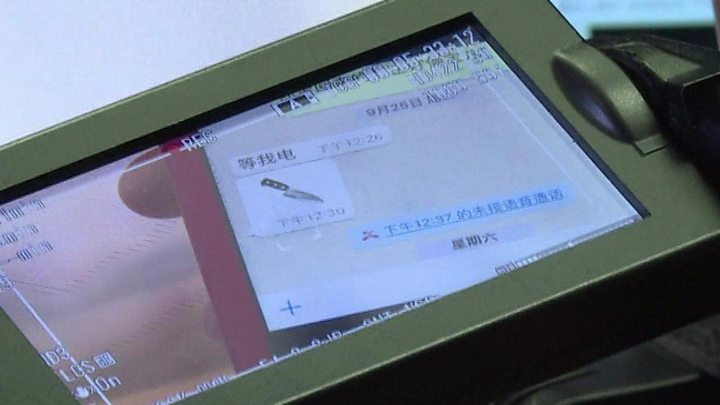 The detained Chinese head of Interpol, Meng Hongwei, is being investigated for alleged bribe-taking, Chinese authorities have announced.

Mr Meng was first reported missing in late September after travelling from Interpol HQ in France to China.

His wife has revealed that he sent her a text message with a knife emoji on the day he went missing.

Mr Meng is the latest high-profile target to be ensnared in China’s sweeping anti-corruption campaign.

He is also a vice-minister for public security in the country.

In its announcement of the investigation, China’s Public Security Ministry said the probe was “correct, wise and shows the determination of [President Xi]’s administration to continue its anti-corruption drive”.

Interpol is the global policing agency that co-ordinates between police forces around the world, including searches for missing and wanted persons.

Interpol’s general secretariat oversees the day-to-day work of the 192-member organisation, with the role of the president largely ceremonial.

After Mr Meng’s disappearance was made public on Friday, speculation had mounted that he had been taken into custody. A number of top Chinese government officials, billionaires and even an A-list celebrity have vanished in recent months.

Last week, actress Fan Bingbing, who disappeared in July, emerged with a public apology and a fine of 883 million yuan ($129m; £98.9m) for tax evasion and other offences.

But correspondents say that Mr Meng’s high-profile position at Interpol was once seen as a prize for Beijing, raising questions about whom he might have angered or what he might have done to be targeted as part of President Xi’s anti-corruption blitz.

What has Interpol said about the matter?

In a statement on Twitter on Sunday, it said it had received Mr Meng’s resignation with immediate effect. Under its terms it has appointed senior vice-president Kim Jong-yang of South Korea as acting president.

A new president will be elected for the remaining two years of Mr Meng’s mandate at the general assembly in Dubai next month.

On Saturday, the international police agency urged China to clarify Mr Meng’s status, saying it was concerned about the well-being of its president. There has been no word from him on the charges he faces.

What did his wife say?

French authorities have opened an investigation and have placed Mr Meng’s wife under police protection after she received threats.

Grace Meng, speaking shortly before China’s confirmation of the detention, had told journalists she thought he was in danger.

She issued an emotional plea for international help to find her husband.

On the day he went missing, she said he had sent her a social media message telling her to “wait for my call”, before sending a knife emoji, signifying danger.

With her back to the cameras to avoid being identified out of fear for her safety, she held back sobs to read out a statement in Chinese and English.

The reach of the Communist Party

Analysis by Robin Brant, in Beijing

When Meng Hongwei was appointed two years ago, one newspaper here wrote that it would “promote understanding abroad of China’s justice system”.

This is probably not what was envisaged back then. His “resignation” and apparent detention makes it clear that it’s the laws of China – and the rules of its governing Communist Party – that trump all else for any government official. Even if they’re appointed to a job in France.

Importantly it didn’t mention – as is often the case with high-profile detentions like this – the charge of “violating party rules”. The anti-corruption body has targeted thousands of people in a relentless drive led by President Xi Jinping. There are also rumours that Mr Meng may have been purged because of his links to another senior party figure out of favour with the leadership.

Will this affect China’s image?

The investigation into Mr Meng has raised some concern that international institutions will be reluctant to appoint Chinese officials to high positions – something Beijing has pushed for in recent years.

But Tom Rafferty of the Economist Intelligence Unit in Beijing said while he believes the current case is not likely to affect future appointments, it does have an impact on China’s image on the international stage.

“There’s obviously going to be some bad publicity around this and it’s not like China doesn’t care about this,” he said.

“But whatever they want Mr Meng for has in this case trumped their concern for international public opinion.”

Who is Meng Hongwei?

He was elected Interpol president in November 2016, the first Chinese person to take up the post, and was scheduled to serve until 2020.

He headed the organisation’s Executive Committee, which provides overall guidance and direction.

Mr Meng has 40 years of experience in criminal justice and policing in China, notably in the fields of drugs, counter-terrorism and border control.

After his election, human rights groups expressed concern that the move could help China pursue political dissidents who have fled the country.